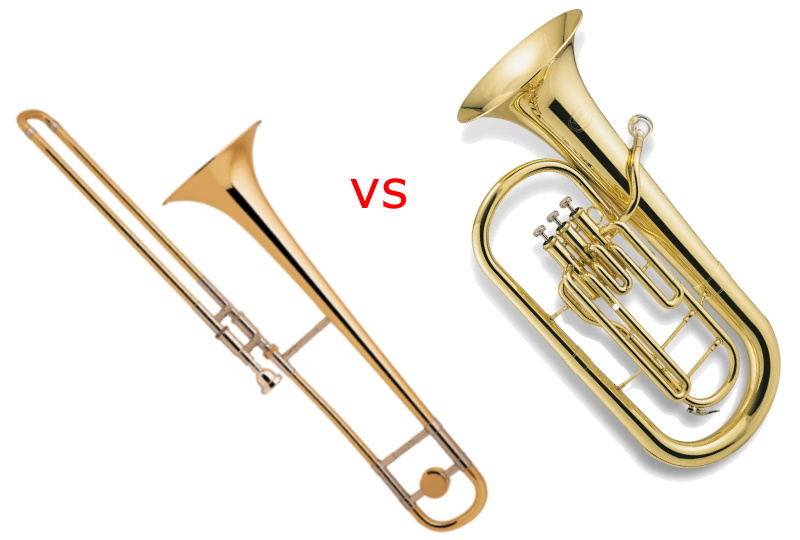 A common dilemma among newer musicians is whether to learn the trombone or the baritone. This question is particularly frequent among high school kids looking to join their school marching band. It’s also relevant to orchestra band players.

If the goal is to play in concert bands only, either of the two instruments can be learned as both are in demand. For marching band, it’s better to learn the baritone. While trombones were for years a mainstay of marching bands, many bands now only use baritones.

To make the final decision, other aspects also have to be taken into account. These include the differences between the two instruments in build and sound, switching between baritone and trombone, and whether the baritone is bound to replace trombones in concert bands.

Differences between baritone and trombone

A larger section of the baritone’s tube is conical when compared with the trombone’s more cylindrical tube. As a result, the baritone has a darker tone than the trombone.

The trombone can play great glissandos using its sliding tube. This is something the baritone player can’t replicate. Sound-wise this is a major difference. Orchestral and band composers often utilize this technique.

A difference not so obvious to the listener, but very important for the players, is that because of its structure, the baritone offers more air resistance. Pushing against this extra resistance makes playing high notes easier on the baritone than on the trombone.

What the two instruments do have in common, is that they play approximately the same range of notes. This is because the length of tubing is roughly the same in both.

Which is better for marching?

While trombones are generally part of symphony orchestras and brass concert bands, they are nowadays not so often used in marching bands.

The slide mechanism of the trombone makes it difficult to march in close ranks, especially if it is a large contingent of trombones. Other band members can even be injured by a trombone player’s sliding action.

It’s becoming the trend for children playing trombone in a concert band to also learn to play the baritone. This allows them to participate in concerts and be part of the school’s marching band.

Although it is nowadays widely accepted that the baritone is better for marching, some marching band connoisseurs will always feel something is missing when trombones are left out. Their view is that trombones have been part of marching band tradition for years.

For that reason, some marching band directors still include trombones in their bands. The trombone section is kept very small so that the necessary three-step distance between the marching rows is not disrupting the band’s formations.

SEE ALSO:   Is Baritone (Or Euphonium) Easier Than Trumpet?

If a trombone player in a concert band wants to play in a marching band which doesn’t include trombones, he/she needs to learn the baritone as well.  Players who are switching between trombone and baritone generally find the switch relatively easy.

While they are two different instruments, the range, embouchure, and air intake are very similar. An experienced trombone player normally doesn’t have a problem producing a good sound on the baritone.

If the player maters the baritone, s/he shouldn’t encounter intonation problems either.

The one thing the trombone player initially has to practice a lot on the baritone to make switching easy is to get their fingers “valve-ready”. The baritone requires pressing the valves in various combinations and in quick sequence.

Holding the baritone, which is heavier than the trombone, also takes some practice.

As the two instruments have much the same range, the baritone can in principle play the trombone part.

However, certain trombone specific techniques like a long glissando cannot be replicated by the baritone.

Tone quality is also different due to the baritone’s conical bore for a large part of the tube. As mentioned, the trombone produces a brighter tone than the baritone.

When the trombone part is played by the baritone, the timbre of the music will change. The baritone is often given countermelodies and solos to play, while the trombone is given the on-beats and off-beats.

For the trained ear, the music will sound different if baritones play both instruments’ parts.

It is generally accepted that the trombone part should be played by the baritone only in “emergencies” when no trombone player is available. The baritone should not replace the trombone in the orchestra band as a permanent arrangement.

Is a baritone the same as a euphonium?

Historically, the terms baritone and euphonium are used interchangeably in the U.S. Nowadays, however, the trend in concert bands and symphony orchestras is to accept the British-European definitions and treat each instrument as unique.

In layman’s terms, the sound differences between the euphonium, baritone and trombone can be described as rich and mellow for the euphonium, lighter and brighter for the baritone, and even brighter with a raspy edge for the trombone. The baritone is the “smaller cousin” of the euphonium.

Because of its weight and deep mouthpiece, young players often experience that while they can blow enough air to make the Euphonium sound good when they are standing still, creating great sound on the march is easier with the baritone.

The trend is that in marching bands the euphonium and baritone are used interchangeably, but concert band and symphony orchestra composers increasingly write different parts for the two instruments.

Choosing between the trombone or the baritone as a beginner is a very personal decision. For concert bands only, it’s a matter of which instrument sounds better to you. Both trombones and baritones are in demand in concert bands.

Since trombones are nowadays often excluded from marching bands, starting with the baritone may be a better option if you’re interested in both marching and concert bands. You’ll be able to pick up the trombone quite easily later on.