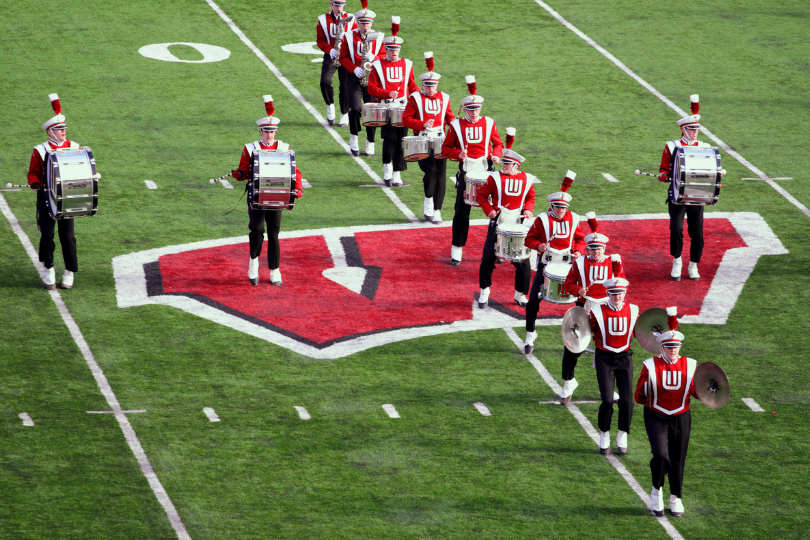 Marching band is one of the best opportunities to make music, have fun, and bond with others. Eventually, students in high school marching band will arrive at the choice of whether to continue the activity in college.

Marching band in college is a valuable experience that will give you a great social life, free and fun trips, and a welcome break from academia. While it’s hard work, marching band can also help your career. Some colleges even offer monetary incentives for being a member of the marching band.

Not all college marching bands are the same, so there are several variables to consider when making your ultimate decision.

Marching band in college is primarily focused on entertaining the crowds at football games. As a member, you get to make music and support the team.

In many schools, the college marching band culture is surrounded by the anticipation of the big game. The power of performing in a massive stadium for sports and music fans alike is a satisfying experience.

The size of the band varies by school, with some marching bands having as many as 400 members. This is likely much larger than your high school program.

Experiences vary depending on the school. Some programs are intense and strive for superior performance (e.g. many Texas bands), while others focus more on having fun and on the overall experience (e.g. WSU).

Despite the variables, many college band members find it to be a rewarding experience in many regards.

Getting outdoors and away from your coursework and studies will help you stay sane in college. It can be mentally exhausting to focus solely on class work, so it’s essential to have an activity to bring balance to your college life.

Making music and socializing in marching band is a great way to achieve this. Some studies have shown that extracurricular activities like marching band can even help improve academic performance.

Marching band helps with social life in college (and later)

Being a college freshmen can be daunting with all of the life transitions such as relocating, leaving home, and finding new social circles. College marching band is a great way to meet people. You potentially make 200 to 300 new friends immediately.

Because football season is in full swing at the beginning of the school year, college practices and band camps are often scheduled before classes begin. This offers the opportunity to establish social connections early in the academic year.

You will meet people from all over campus and even outside of your major, since college bands are usually open to music majors and non-music majors.

Joining a college marching band is like being a part of a big family. It’s a large group of like-minded people you can fit right into.

Some college students make friends for life or meet their future spouse in marching band, and others make acquaintances that will help steer their career.

Marching band can help your career

There are various leadership opportunities in marching band that can appeal to prospective employers.

Section leaders, squad leaders, and drum majors are just a few leadership positions commonly established in marching band that will serve you in any career you choose.

Employers like seeing extra-curricular activities on your resume. College marching band is a substantial activity that looks great along with your other curriculum.

Performing weekly pregame shows, halftime shows and stand tunes in front of large crowds also set you up with some desirable career skills. Public performance skills and team work under pressure are important skills for recruiters.

For example, the “Gene Thrailkill Award” is available to students at the University of Oklahoma. For this one, you do need to major in music and participate in the marching band in addition to one of their spring concert bands to be eligible.

There are also awards like “The Sun Devil Marching Band Scholarship” at Arizona State University,  in which any marching band member can qualify.

Some require that you be in the marching band for a certain time before becoming eligible, e.g. “The Stephen and Joanne Williams Marching Band Scholarship” at the Hayes School of Music, Appalachian State University. This award is open to upperclass students only.

Some college marching band programs offer other monetary incentives like stipends. In some schools, band members receive $500 per season.

Marching bands that pay their members do so to compensate the musicians for their time. This helps keep enrollment in the band up since students won’t need to choose between working and playing in marching band.

Traveling is a huge part of being in a college marching band. Away from home games for the college football team bring the opportunity for the college band to perform at other stadiums in various cities.

These trips are funded by the school and free of cost for the student. Depending on your college football team, you could have the chance to go to regionals, conference championships, and even bowl games.

While the marching band is traveling in support of the team at play-offs or championship games, there is generally time off to enjoy exploring new places.

Cons of marching band in college

While college marching band has great advantages, it’s a big commitment and hard work. A lot of time and effort is required in this activity.

Prepping a new show every week or two requires hours of rehearsal. A typical college marching band schedule could be at least 3 group rehearsals and 1 sectional every week. Some rehearse every single day.

Game days are full day obligations, and if travel is involved it can be a multi-day thing. There may also be random pep band events during the week.

Some bands like drum corps are even more demanding, with more challenging music and shows than the average college band. They have abundant drill and dozens of pages of music to learn. Members are expected to be top performers.

Because of the huge time commitment, you may not have much of a social life outside of the band.

Whether the demanding schedule is worth it in college depends on whether your goal is primarily to be part of a high performance show, to make friends, or to find a distraction from your classwork.

Another con of being in a marching band is having to wear a uniform, including in the heat of late summer/early fall in some areas.

Depending on your high school, you may have come from a competitive marching band program that attended district competitions and events. There aren’t district or state competitions for college bands, so competition is inspired by rivalry between schools.

While college band it is more centered around the show and entertainment, there are prestigious college marching bands that put on DCI level shows.

Music and drill for college marching bands is more advanced than high school, and there are usually multiple shows within a season.

Many colleges put on a new halftime show every week, while high school marching bands typically do one to two shows per season.

In most cases, college football is more exciting and intense than high school football. The extra pomp and circumstance of the professional level stadiums, lights, and massive crowds are amplified at the college level.

In high school, your freedom is more limited because you are a minor, so band trips and travel are chaperoned. Being adults, college students get to spend their downtime as they please.

Which colleges have the best marching bands?

The state of Texas contains the most prestigious marching programs in the southern U.S. Texas takes music education seriously, and it shows in the quality of their programs and performances.

The Trojan Band at The University of California has been featured in enough films and television to be nicknamed “Hollywood’s band”. This marching band has performed at the Rose Bowl more than any other college band.

The Ohio State University Marching Band is one of the largest all-brass and percussion marching bands. Their shows are incredibly innovative, and they are famous for their astounding drill techniques.

A historic band, University of Tennessee’s Pride of the Southland Band has had the honor of performing for the presidential inauguration every year since 1965 (with the exception of 2013). Their circle drill and kaleidoscope formations are incredible.

There are several more colleges with marching bands of equal caliber to the above, including Purdue University, Ohio University, Penn State, and The University of Michigan.

Perhaps the uniforms and demanding rehearsal and performance schedules aren’t for everyone. But for many, being a member of a college marching band is full of lifelong memories and valuable experiences.