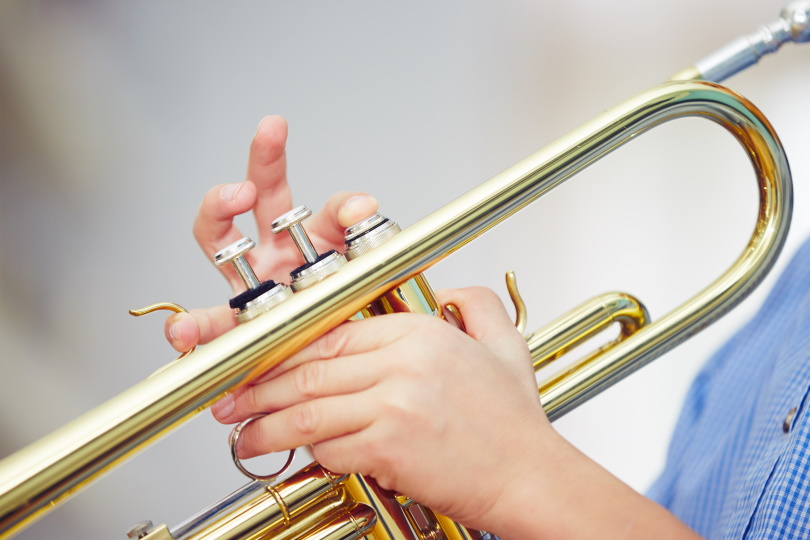 Any keyed trumpet, regardless of type, can play all 12 notes of the chromatic scale. If you can learn the fingerings for the scales, you can play any piece in any key on any trumpet type. However, the fingerings on a given trumpet type is a lot easier when playing in some keys than in others.

Although you can theoretically play in any key on any trumpet, doing so may require a lot of technique. To decide the most appropriate trumpet type for you, you need to learn about the various trumpet keys, and understand the concept of concert pitch and the purpose of transposition.

What’s the key of a trumpet?

Every trumpet with valves has a “home” key that is indicative of the pitch of its open note. For instance, if a trumpet is pitched in Bb (home key) – this implies that when you do not press any valves of the trumpet, the Bb pitch is produced.

This is the open note, the note produced when no valves are pressed.

What gives trumpets different keys? Trumpets have different tubing lengths which result in different pitches sounded when no valves are pressed. When you press a valve, you alter the tubing length and thereby alter the pitch.

When you start learning a trumpet, you need to memorize the 12 fingerings of the chromatic scale. Then, using these fingerings, you will practice all the major scales, and move on to the minor scales and so forth.

While the Bb trumpet is the most common type, you also find trumpets in the key of A, C, D, E♭, E, low F. On each of these, the combination of notes using different fingerings and adjusting the tubing lengths using the three valves allow you to play in any key desired.

However, while that is true in theory, each trumpet has “easy keys” and “difficult keys”. For a Bb trumpet, Bb Maj is easy to play – it only involves using two valves and using the third valve once.

Similarly, the C Maj scale that you learn early on will also feel relatively straightforward.

The “difficult” keys generally refer to the ones that are uncommon or require solid technique, namely the ones that demand the use of the third finger, which can pose coordination challenges.

Ear training and theory knowledge also play a role in the difficulty.

Through the ages, composers have written music for trumpets in different keys. For instance, the piccolo trumpet was popular during the baroque era and the Bb trumpet didn’t exist then.

With experience, trumpet players eventually achieve the musicality to play a trumpet in any key for any piece.

Professional trumpeters, especially orchestral musicians, can sight read notations written for any trumpet key (A, Bb, D, Eb, E, or F) while playing it on a C or Bb trumpet.

The concert pitch is an internationally agreed upon standard pitch for music literature. It acts as a predetermined reference point and the piano middle C is used to establish it. Theoretically, the modern concert pitch is an A at 440Hz above the middle C.

There are hundreds of instruments out there, and many of them are tuned to different keys. Some of these instruments are concert pitch instruments while the others are called transposing instruments.

For instance, the piano is a concert pitch instrument. A pianist will play the C note in response to a written C.

In contrast, the Bb trumpet is a transposing instrument: when a Bb trumpet player plays the written C, it will produce a Bb note (concert Bb).

Woodwind and brass instruments like flutes, bassoons, trombones, oboes, and others are examples of concert-pitch instruments. If you play a C on any of these instruments it will sound like a C on the piano.

Besides the trumpet, there are many transposing instruments, such as trombone (C), alto sax (Eb), French horn (F) etc.

Why have trumpets in different keys?

There are a handful of reasons trumpets exist in different keys despite being chromatic instruments.

Timbre is a big reason that drives the design and utility of different keyed instruments. Each type of trumpet has a distinctive tone and produces a different sound.

These timbres – e.g. light and bright for an Eb trumpet – may be desired for the composition or musical piece. Certain trumpets also have a better ability to “cut through the mix” or may have a more optimal texture/timbre for a solo.

Aesthetically, the timbre of the Bb trumpet blends beautifully with other wind instruments like the Bb clarinet, alto sax, and trombone that are also pitched in flat keys.

There are also historical reasons behind these variations. Over the centuries, various trumpets were made in varying shapes and sizes during different eras. These eras of music had composers whose music was optimized for the tone/capability of the predominant trumpet of that day and age.

Generally, new students start with a Bb trumpet. It is a transposing instrument that sounds a second lower than concert pitch.

The Bb trumpet boasts the largest tubing – when stretched out it spans four feet in length. This gives it a mellow and dark texture compared to other trumpets.

The C trumpets are a close second to the Bb trumpets in popularity. Today, they are the norm for orchestras and commonly found in military bands.

The piccolo trumpet is pitched in Bb and it’s the smallest of all trumpets available.

These trumpets are pitched in Bb but are tuned to sound an octave higher than a standard Bb trumpet. The extra valve option gives them a perfect-fourth of downward range.

Piccolos use a separate lead pipe – the tube in which the mouthpiece is placed – for each key. You can use a lead pipe extension to play them in the key of A.

Piccolo trumpets have a bright and punchy tone and are also a staple in most modern orchestras, concert bands, and for solo players.

The D/Eb trumpet has interchangeable slides to shift between the two keys (D and Eb). These trumpets are even brighter than the C trumpets and find use in solo performances or orchestral work.

They have a unique tone and are smaller in size than the Bb trumpets.

Transposition on the trumpet

To understand transposition, let’s take the example of a Bb trumpet. Which note of the Bb trumpet will sound like a C on the piano? The D note, a whole step up (major second) from the C note.

If you’re on a Bb trumpet, you actually play concert pitch (C) music because there is a whole-step difference. If you read and play notation for the concert pitch, you will sound a whole step lower.

Most composers won’t give subsidiary scores for the benefit of trumpet players or various other wind instruments. The only way for an ensemble or orchestra to rehearse with efficiency is for every wind instrument player to have the ability to perform their own transposition.

the trumpet player will need to transpose music “at sight” – read the music in one key but play it in another key.

S/he determines the interval between the target key (Bb in this case) and the written key (concert pitch in this case), and mentally moves each note by that interval.

Professional trumpet players are routinely tasked with parts written in concert pitch or even other keys. Knowing your scales is important so as to be able to process whole chunks (phrases) at a time rather than individual notes.

Accomplished trumpet players can communicate (think and talk) in written/concert pitch. Relearning the fingerings on a trumpet is not a good option and doesn’t help communicate with other musicians. Learning to transpose is generally a far better time investment.