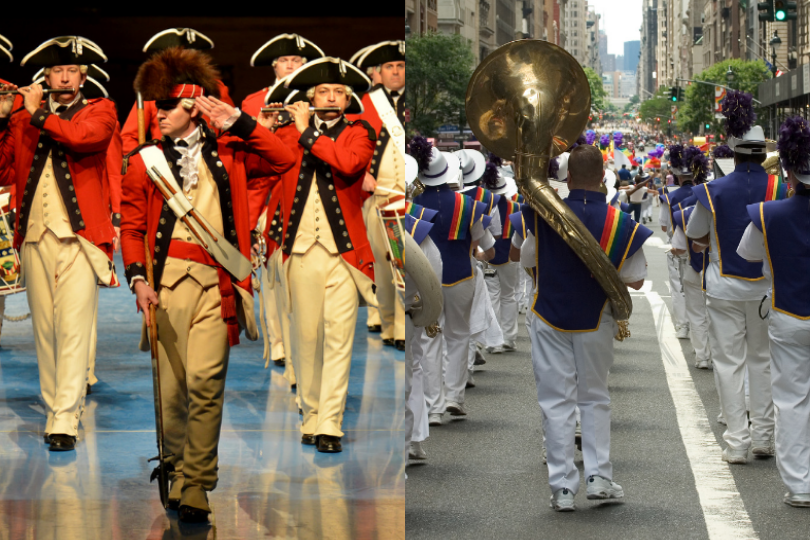 Being involved in the marching arts is a challenging and rewarding experience for band members everywhere. Many musicians start with marching in their high school or college marching bands, but what about drum corps?

The difference between marching band and drum corps comes down to history and instrumentation. The level of performance, time commitment, and schedule do not truly help distinguish them, as these aspects vary depending on the group.

If you are considering joining a drum corps, but you’re not sure how it relates to or differs from marching band, there are several things to consider.

Drum corps is short for Junior Drum and Bugle corps. The main differences between drum corps and marching band lies in the instrumentation, and the fact that drum corps groups are not usually affiliated with a school or college.

While they sometimes resemble marching bands, drum corps are independent organizations for youth, ages 14-22, who dedicate their summer to preparing an 11-minute show.

These organizations are usually connected to their city or state rather than a school, such as the Blue Devils from Concord, California or the Cadets from Allentown, Pennsylvania.

Drum corps are split into three divisions based on the number of members. Division III is 30-70 members, Division II is 80-135 members, and Division I can have up to 135 members. Drum corps also vary in structure, finances, philosophies, and touring schedules.

Drum corps shows are highly creative productions surrounding a theme that is integrated throughout every aspect of the show.

The best shows are incredibly unique and effective through the visual and musical effects, and are often complex and thought-provoking.

Marching bands are nearly always affiliated with a school, and in many high schools and colleges are focused on supporting the football team at games. There are competitive marching bands, though they are not drum corps.

Marching bands also use themes in their shows, but they are often simpler and aimed toward entertaining the crowds at the football games.

The intensity and difficulty is generally higher in the drum corps (though not always), and the sound of the band differs due to the instruments and level of playing (which varies depending on the corps).

One of the most obvious differences between drum corps and marching band is that drum corps has no woodwind instruments. Drum corps is only brass, percussion, and color guard.

Traditionally, drum corps mainly use bell-front brass horns. For example, there aren’t any sousaphones, but instead the contrabass bugle, which is the lowest-pitched brass instrument in the corps

Marching bands have brass and percussion, and also woodwinds and occasionally electronic instruments and sound effects, which are traditionally not allowed in drum corps.

Woodwind players who wish to join a drum corps must either learn a brass instrument or join the color guard.

Recently, Drum Corps International (DCI), the governing body over junior drum and bugle corps, approved several new rules. One of them is to allow brass instruments such as French horn, trombone, and sousaphone.

Since these changes, these instruments have been used on occasion for special features but haven’t really been fully integrated in most drum corps.

In many cases, drum corps are more selective compared to marching bands. The audition process is often rigorous, and only the best musicians and marchers are chosen for membership in corps groups.

Since both are an athletic activity, groups of either type may require a sports physical, medical history, and health insurance information.

This is especially important in drum corps since the performers are often away from home and last all summer.

Challenges that are common between drum corps and marching bands include rehearsing and performing in hot weather, huge time commitments, and of course the challenge of marching and playing at the same time.

Some drum corps, however, take these challenges to another level.

Because drum corps are often more intense, the rehearsal schedule is very demanding. Depending on the corps, members might rehearse 10-14 hours per day, 6-7 days per week in the pre-season before departing on the summer tour.

Summer tours are a significant commitment of its own. these can last over 12 weeks, and drum corps members may perform at around 30 shows as part of the tour.

Most marching bands do not require that much rehearsal. Many marching bands perform weekly, and at most will travel to away games for the football games. That said, some bands rehearse up to 40 hours per week – e.g. Texas A&M University.

Overall though, the level of intensity and commitment is ultimately dependent on the specific group, rather than whether it is a drum corps or marching band.

When you factor in the cost of the instrument, specialized shoes, and uniform fees, both drum corps and marching band require a significant amount of money to participate.

Instruments can cost hundreds to thousands of dollars, and the shoes are around $50 or so, depending on the materials and brand.

Luckily, many marching bands offer rental options for instruments, which varies by school.

For drum corps, you usually do not have to purchase an instrument, but you do need your own mouthpiece to use their brass instruments, or your own mallets/drumsticks for percussionists.

Member fees in 2021 range from $3,000 to over $5,000 in major corps, like the Blue Devils or Carolina Crown. This money helps cover the costs of transportation, equipment, food, uniforms, instructors, housing, and facilities.

There are several scholarship opportunities for qualified students awarded yearly through Drum Corps International. Fundraising is also an option to aid in the high costs of the activity.

Marching band is significantly less expensive compared to drum corp. While there may be fees involved depending on the school or college, these rarely exceed a few hundred dollars since marching band is not a touring activity.

Each year, a variety of drum corps shows are performed that win the affections of fans everywhere. Favorites vary based on opinion, but here are a few notable shows from the last decade.

In 2014, the Blue Devils had an undefeated season with their show “Felliniesque”, which is the highest scoring show in DCI history. The show was based on the Italian film director Fellini, whose influence on cinema and culture inspired the props, music, and effects in the show.

Santa Clara Vanguard earned the 2018 championship title with their show “Babylon”, which tells the story of a utopian city brought down by greed and power. In the story, communication is impossible, so human connection and the power to move beyond language are explored in the show.

The Ohio State Marching Band has recently gained national attention for their picture shows. In a tribute to Michael Jackson, their drill famously created a moonwalking Michael across the field.

The official marching band of Texas A&M University, the Fightin’ Texas Aggie Band, is the largest marching military band in the world at over 400 members. They use straight-line marching maneuvers and perform exclusively to traditional march music.

Conclusion: which to choose?

It is nearly impossible to choose which is better between marching band and drum corps. Each has their own style and brings their own audiences, expectations, and demands.

With the recent rule changes within DCI, drum corps and marching band are becoming even more similar than in the past, but as you’ve seen, there are still distinctions between the two.

It is often believed that drum corps are superior to marching bands, but that is not always true. The variety available in the marching arts is to be celebrated, and which is the best choice truly depends on your preferences and aspirations as a musician.