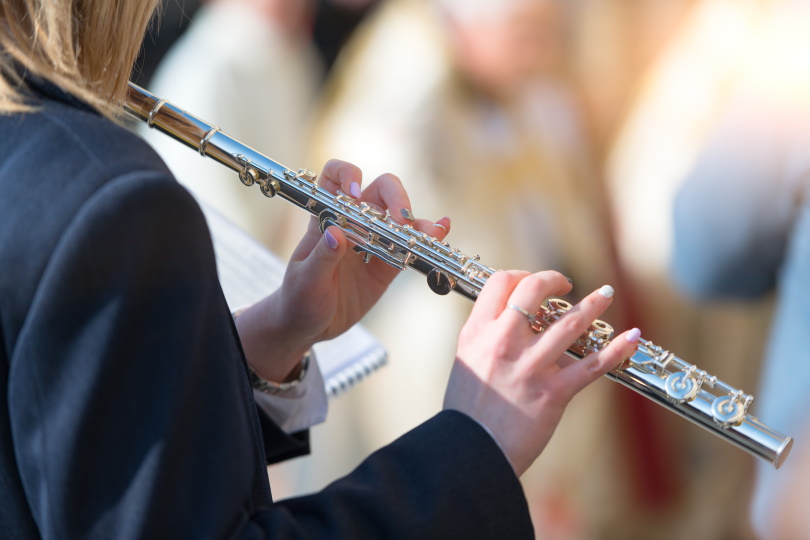 Most of the woodwind instruments are played vertically. The player blows a stream of air down toward the floor. But the modern flute is played horizontally. Why is it played sideways?

Playing the transverse flute (sideways) allows the player to blow air across a hole in the lip plate, rather than into a mouthpiece or reeds. The flutist can better control a wider range of dynamic level and tone color. Intonation and expression are also easier.

Let’s see how the flute produces sound, how it’s different from the recorder, and what are the advantages of the transverse flute.

How does a flute make sound?

Rather than a mouthpiece or reed, the flute has an embouchure hole or tone hole on the head joint. A flutist makes sound by blowing a stream of air across the embouchure hole.

The sound comes out the end of the flute and any open holes. Pitch is determined by opening and closing holes on the flute.

The body of the flute doesn’t produce sound, it provides the pitch range and amplifies and colors the sound. The tone is determined by the player’s embouchure and air speed, and is influenced by the design and material of the flute.

Why is the flute held to the side?

Most of the other woodwind instruments (oboe, clarinet, saxophone) are played vertically because the air needs to move in a downward direction.

SEE ALSO:   How Much Should I Practice Clarinet ? A Teacher's Experience

Because the air needs to be blown across a hole on the flute, the flute needs to be angled sideways. Otherwise, the air would simply go into the hole without any vibration made.

A vertical flute head joint now exists but it’s rare. It’s made for those who may have trouble holding the flute in the traditional manner. The head joint is shaped somewhat like a question mark and fits into the body of any C flute. The tone may be somewhat different due to this curvature of the vertical head joint.

Around the world, there are different types of flutes which are played vertically – these are known as end-blown flutes. These include the Native American flute, the Egyptian nay, the Bulgarian kaval and the Japanese shakuhachi.

End-blown flutes don’t have keys, they only have holes to change pitch.

Advantages of blowing the flute sideways

Because it’s played to the side with an embouchure hole, the transverse flute is much more flexible dynamically and expressively.

If the flute were played straight, it would need to make sound like a recorder, using a mouthpiece which blows air through a tiny duct (windway), moving the air stream to an edge. There wouldn’t be much variety of volume or tone.

The transverse flute has a wider dynamic range, meaning it can play much softer and much louder than a recorder. This is because the player is able to make minute adjustments to their embouchure (how they shape their mouth to play) so that they can produce very loud and very soft sounds with control and good intonation.

Transverse flutes are frequently used in larger ensembles because they are able to project the sound better, especially now that they’re made of metal instead of wood.

What side do you play the flute on?

The player positions the flute on their right.  The left hand is placed closest to the player’s head, and the right hand is further down on the flute. The flute should be held parallel to the floor.

It’s important that the player not twist their body to play the flute. Remain facing forward and move the arms to the proper position. Keep the head straight and shoulders relaxed.

How do you balance the flute?

The flute is balanced at four points: the left-hand index finger, the right thumb, the right pinky on the Eb key, and the chin.

When the instrument is balanced correctly, the player doesn’t have to use any other part of their fingers or hands to help hold the instrument. This frees up the fingers to do their job – playing the notes.

What if you’re left-handed?

All of the woodwind instruments are built with right-handed players in mind. This means the right hand holds the majority of the weight of the instrument and the keys are placed for right-hand position.

While you might occasionally see a specially made left-handed woodwind instrument, this is definitely an exception.

Once a left-handed player starts to become familiar with the woodwind instrument, the right-hand setup feels normal.

Transverse flute vs the recorder

While the two instruments are both a type of flute, sound is produced differently on each of them.

As mentioned earlier, on the flute, the player blows a stream of air across a hole in the head joint. The air oscillates above and below the far edge of the hole, creating a vibration that produces the sound.

By adjusting their embouchure and pressure, the flute player can make a wide range of pitches respond clearly and in tune.

The flute has holes and keys to produce the different pitches. The modern key system of the transverse flute makes virtuosic playing possible. Its range is about 3½ to 4 octaves. Again, a flute player enjoys a wide range of dynamic levels.

On the recorder, on the other hand, the player blows air into a mouthpiece. At the other end of the mouthpiece is a duct which directs the air across an edge, causing an oscillation of the air stream. The vibrations produce sound in this way. There isn’t as much embouchure flexibility possible as there is with the flute.

The soprano recorder has holes but no keys for different pitches. It’s range is about 2 octaves. Dynamically, the recorder is limited, tending to sound soft.

How the transverse flute replaced the recorder

The recorder was very popular before the transverse flute came into use. During the Renaissance Period, many compositions were written for solo recorder, recorder as a part of an orchestra, and recorder consorts – small groups of recorders pitched from sopranino to bass.

However, the recorder basically stopped developing during the early Baroque Period, just when the transverse flute was growing in popularity. As the transverse flute became better known, musicians could see its technical and expressive possibilities, so it quickly developed and became the more used instrument of the two.

The transverse flute became the preferred instrument in orchestral writing. Once the instrument developed to the point that it was made of metal, it had an even wider dynamic range that could be heard more easily in an orchestra.

There are some similarities between the flute and the recorder. A basic aspect of woodwind instruments is that when you open a hole, the pitch moves higher. The two instruments have some fingerings in common.

As mentioned above, the transverse flute and the recorder produce sound differently, so they are quite different to play.

The recorder is thought to be the easier to play of the two. The embouchure is fairly relaxed and you don’t have to blow as hard. Because there aren’t many keys (if any), there are fewer fingerings to learn. The pitch range is also smaller.

For the transverse flute, the embouchure is vitally important. The player must make small adjustments to their embouchure depending on the note being played, especially between octaves.

Since the instrument is capable of a wider dynamic range, better intonation and greater expression, the player is expected to perform these aspects with control.

Developing out of the recorder, the transverse flute is a very popular instrument, with a lot of music composed for solo, chamber ensembles, band and orchestra settings.

Once it was determined that the instrument could be played horizontally, its possibilities for making beautiful music expanded greatly.

With practice, a flute player can perform with a wide dynamic and pitch range, good intonation and wonderful expression. The sound can be unforgettable.