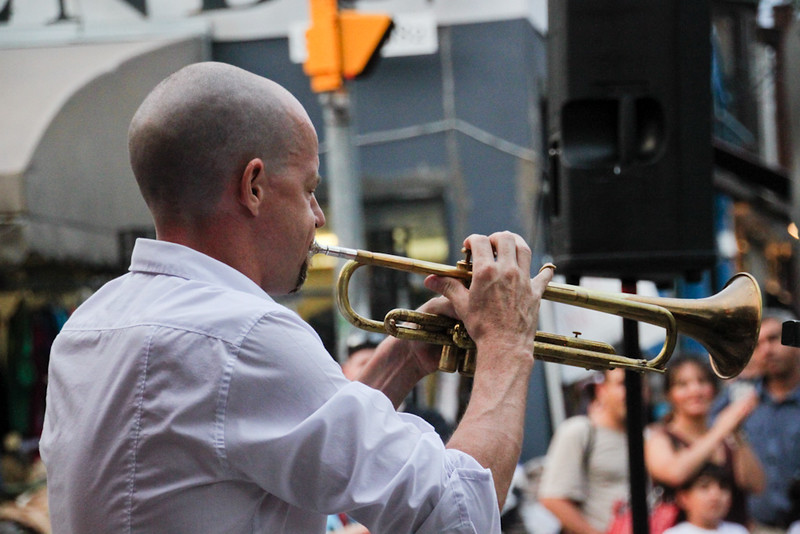 If you’re new to the trumpet or you’re an avid trumpet music listener, you may wonder whether a trumpet can play chords, that is, play multiple notes simultaneously.

As brass instruments, a trumpet can play only one note at a time and can’t play chords because of the way the instrument is built and produces sound. Some advanced trumpeters are able to use singing and lip tricks to produce two sounds simultaneously, although these are not true trumpet chords.

The physical structure of a trumpet and the way the player vibrate and blow air into the tubing to create harmonic notes make it impossible to play multiple notes at the same time.

That said, chords are used all the time in trumpet playing, by outlining chords separately as arpeggios, or by playing one note of chords at the same time as other instruments in the ensemble play the other notes of that same chord.

Can a trumpet play chords?

According to the Oxford Dictionary of Music, a chord is any combination of notes simultaneously heard. The important part of the definition is that the multiple notes must be heard at once.

Think of the sound you hear when middle C, E, and G are played simultaneously on a piano. You experience it as a rich combined sound and not as three separate notes. Thus, for an instrument to play a chord, it has to be able to produce more than one note at once.

Like other brass instruments, the build and sound production mechanism of the trumpet makes it monophonic, meaning it can only play one note at a time.

The trumpet is constructed from brass tubing, bent twice to form a rounded oblong shape. It is equipped with three slide-valves which alter the length of the tube by pressing the slides individually or in combination.

SEE ALSO:   Should I Play Trumpet Or Trombone? Help Me Choose

The sound is produced as a result of air oscillating in the tube. This vibrating air originates in the mouthpiece when the trumpeter blows air through closed lips, making a buzzing sound. As long as the trumpeter keeps his mouth and lips in the same position when blowing, the oscillating air produces a single note of a specific pitch.

Only when the trumpeter changes his mouth or lip position (embouchure) is another note produced. But once again, it is only one note, so a trumpet cannot play chords.

Can a trumpet play two SOUNDS at once?

Brass players use certain techniques to produce two sounds simultaneously. These techniques are frequently used by tuba and trombone players, but nowadays, trumpeters also use it from time to time.

Even though two sounds are produced at once, it never sounds like two trumpets playing and is better described as an added harmonic sound rather than an extra trumpet note

One technique is known as split-tone playing. It is a technique where the trumpeter’s lips are vibrating at different speeds. The second sound heard is generally a 5th or octave away from the note played. It is an audible sound, but again, it doesn’t sound like a second trumpet.

Ironically, split tones often occur unintentionally because of sore and bruised lips! Lip fatigue causes the player to tilt the mouthpiece unconsciously. The pressure on the sore lip is relieved and the lips start to vibrate at different speeds.

Technique #2: humming into the instrument

Another technique is to play a note while singing or humming into the instrument on a different frequency. To get an acceptable sound, the trumpeter has to sing or hum a note higher than the one being played – singing a lower note results in distortion.

Many trumpeters struggle to play and hum simultaneously.  Experienced trumpeters recommend that players who want to master this follow a few steps to perfect this technique:

For both these techniques, although experienced trumpeters are able to produce two sounds at once, the “extra” sound doesn’t resemble an actual trumpet note. Therefore, these techniques cannot be considered playing chords on a trumpet.

So, how are chords used in trumpet playing?

We’ve determined that a trumpet cannot play chords, however, a trumpeter can utilize the rich chord sound by playing chords as arpeggios. An arpeggio is a chord where the notes are not heard at once but one after the other.

Arpeggios are often used by composers of classical music as an integral part of the melody and composition. Composers in the Baroque period e.g. J.S. Bach used broken chords quite a lot in their counterpoint style of composing. When a trumpeter plays this composed music, the arpeggios are experienced as part of the melody line.

Another common situation where chords are played as arpeggios is in an ensemble when the trumpeter improvises an accompaniment while another instrument is providing the melody. Jazz is a good example: the trumpeter outlines chords as arpeggios to give texture to the music or add to the rhythm patterns.

Can a trumpet produce the chromatic scale needed to play arpeggios?

A brass instrument’s tube can only produce notes resulting from the harmonics of the basic note. The harmonics are, simply put, the whole number multiplications of the fundamental frequency in the tube when the brass player plays a note. Thus, the number of possible notes with a specific tube-length is limited.

With the B-flat trumpet, the possible notes to play with an open tube are the fundamental note (middle C), the 5th (G), the octave (C), the 10th (E) the 12th (G) and the C two octaves higher than middle C. To play other notes, the length of the tube has to be altered.

The trumpet has six extra built-in lengths which are activated by using the slide-valves, individually or in combination. This total of seven different tube lengths enables the trumpeter to utilize seven sets of harmonics to play the full chromatic scale – which in turns enables playing any chord as arpeggios.

Producing chords with other instruments

This technique is used by composers of orchestral and more classical types of music.

It can be said that although the trumpet is a monophonic instrument, trumpet music is not excluded from utilizing chords.  In the broader sense of “chord”, the trumpeter can play chords, either as arpeggios or in ensembles with other instruments.