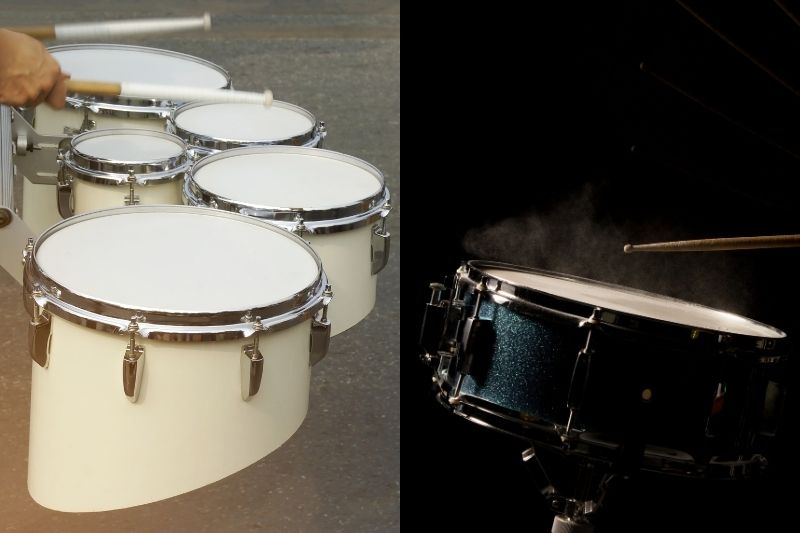 In a marching band, two of the main instruments of the moving drumline (or battery) are the snare drum and the tenor drum. Newcomers to marching band often wonder which of the two is easier to play and march.

Overall, the snare drum is easier to march and play because it is lighter and only requires playing on one surface. The tenor drums are significantly heavier and require more arm movement to play the multiple drums of the instrument.

While tenor drums are overall more difficult due to their weight and the arm movement required to play, snare drum parts are more technically challenging. Snare players also hold a major responsibility within the drumline and the band.

Each instrument involves a variety of challenges and responsibilities worth examining when comparing the two.

Drums for marching bands are specially designed to be worn on a carrier and played while moving. These drums are heavy, and both snare drum and tenor drums require physical conditioning to prepare to march and play.

Anyone carrying the drum will feel strain on their back, shoulders, and abdominal muscles, and smaller people may have to work extra-hard to prepare and carry them. Even the carriers/harnesses of each add some weight at around 10 lbs.

Because the number of drums a tenor set can contain can be between 3 and 6, the total weight carried by the player varies as well.

This can make it more difficult to play these drums when you initially try to focus on holding them and yourself up.

It is important to note that having the carrier/harness adjusted to your height and body shape will make it significantly easier to manage the weight and size of these instruments.

The sound of the snare drum is naturally sharp and crisp, with a very short decay. This leaves little room for error and requires that the player be extremely precise to maintain a clean sound.

Tenor drum, on the other hand, has more than one playing surface, and must be able to keep track of and maneuver between these drums quickly and accurately.

Because of the additional drums, tenor drummers read a different musical notation special to their instrument. The more drums there are, the more “notes” to identify in relation to the corresponding drum.

Snare drum music is simpler to read as far as pitch goes, because there is only one line, or one “note” for the single drum surface.

Composers take advantage of this fact however, and often write more complicated parts for snare drums that are more rudimental and technically demanding.

The lateral movement involved in playing the tenor drums often makes it difficult to maintain a nice tone. When moving between drums, the player must not change their vertical approach to each drum.

Difficulty of marching snare vs tenor

The sizes and weights of both the snare drum and tenor drum cause some limitation of movement. Neither instrument can make extremely quick maneuvers, and they both use a special marching technique called the “crab step”.

A crab step is marching side to side while keeping the entire body facing forward and the feet moving across each other.

While widely considered to be the best way to march sideways for the battery percussion, there are challenges in doing the crab step correctly.

The player must be able to consistently support their drum and carry while maintaining excellent posture and pace without wobbling. This can be incredibly difficult on the tenor drums especially, because they are bigger and heavier.

The heavier weight of the tenor drums can make the instrument extremely difficult to march. It is absolutely essential that players of this instrument be prepared to build the strength and endurance to carry this instrument.

The techniques involved in playing each instrument are pretty distinct. One feature of playing the snare drum is learning traditional versus matched grips.

A matched grip is holding the drumsticks the same way in each hand, which is both hands over the sticks, facing downward.

While traditional grip allows for more exciting visuals, which is vital in the competitive world, technically speaking, matched grip is the easier to play of the two.

Playing the tenor drums involves techniques called sweeps and crossovers. Sweeps are moving a single hand between two drums and require training to do so cleanly.

Crossovers simply involve crossing one hand over the other. They are a great musical and visual effect.

Tenor drums also feel different to play due to the change in the stick’s rebound. The material of the drum heads and their tensions is quite different from a snare drum, which causes a different type of bounce.

Aside from grip and tricks, a snare drum head offers a better rebound than tenor drum heads, making them generally easier to play on. The smaller tenor drums are particularly difficult to perform diddles on.

A fun aspect of playing drums is stick tricks. While players of both instruments can enjoy showing off some stick tricks, it is easier to do them while maintaining a good sound on the snare drum because of the single drum head.

Every instrument of the drumline holds a role within the battery and the band. The snare drum typically carries the main rhythm of the ensemble.

Considered the lead voice of the battery, snare drummers have a significant responsibility to uphold. Usually, the most experienced drummer plays center snare.

The center, or head, snare player is charged with the duty of tapping off or performing a roll-off for the group. When marching in a parade or on the field, the snare player must often be in charge of providing drum commands for transitions.

The tenor drums bring a melodic element to drumming because they have multiple tonal drums. A drum cadence is significantly enhanced by the melody of the tenor drums. However, the tenor drum part is not as essential as the snare drum part.

Snare drum players must be prepared for the challenges of working under a higher amount of pressure due to the increased responsibility. It can be scary to have to carry the entire ensemble.

Snare drums tend to draw more attention than tenor drums and receive more recognition for their playing. Snare lines are typically larger, so it is rather impressive to see up to nine snare players coordinating and playing cleanly together.

Tenor drum music is usually not as complicated as snare music, so tenor drums are not usually as highly recognized. People are usually more familiar with the snare drum as well, because it is loud and distinguishable.

Being at the center of the drumline and displaying great showmanship brings snare more attention.

The sound of the snare drum is the main part of any drum cadence, which in turn contributes to the instrument’s increased popularity.

The movie “Drumline” likely also made a significant impact on the popularity of the snare drum as the main character was a snare drum player.

Each instrument is unique and provides its own sound to the texture of the band.

Players who enjoy more rudimental playing and serving in leadership positions may be drawn to play snare, while the melodic grooves of the tenor drum may attract others.

Although they are considered to be more challenging, with the right conditioning and preparation, tenor drums can also be fun and rewarding to play.