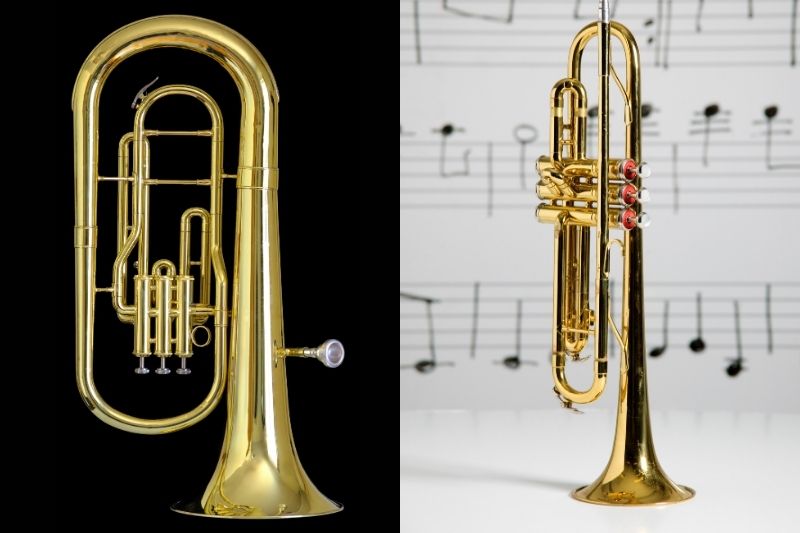 Trumpet and baritone are brass instruments each with a very distinct sound and different role in an ensemble. Is the baritone really easier than the trumpet?

The baritone is easier than the trumpet because it has a more relaxed embouchure, lower resistance, and easier parts to play. The trumpet demands a high level of lip muscles and stamina due to the higher pressure and higher range.

While many consider these facets to make the baritone or euphonium easier overall, they have their own challenges to overcome.

Ergonomics and posture: is baritone harder?

The baritone and the euphonium are both larger and heavier than the trumpet. The increase in size and weight is enough to make it more difficult to handle and maneuver.

When sitting, the baritone/euphonium is held on the lap of the player, tilted at a slight angle, with the player’s left arm wrapped loosely around the instrument.

Holding the baritone or euphonium can be cumbersome at first, especially for younger or smaller students.

The trumpet is smaller and lighter and therefore easier to manage. The weight of the instrument does rely on the left hand, so holding it up for extended periods of time can also be taxing.

The weight of the baritone – around 6 lb, 7-8 lb for a euphonium – can make maintaining a proper posture more challenging when holding the instrument.

Learners often need time to adjust to holding the instrument properly before being able to focus on playing.

Does baritone have an easier embouchure than trumpet?

Because it’s a larger instrument, the mouthpiece of the baritone is also larger than the trumpet mouthpiece. The size of the mouthpiece has a significant impact on the embouchure demands for the player.

The lips have to buzz at a higher frequency to achieve notes on the trumpet. Trumpet players must build stamina to be able to play consistently for any length of time.

Baritone players will also need to build some muscle and endurance, but not to the same degree as a trumpet player. The baritone produces lower pitches that do not require the same intensity of the embouchure.

The larger mouthpiece of the baritone also allows for a more relaxed embouchure that blows more freely. Many find it easier to produce sound on the baritone for this reason.

To determine which has easier breath support, we will first consider how much air each instrument requires. In general, smaller instruments do not require as much air to play as larger instruments.

The baritone requires a larger volume of air compared to the trumpet, and the euphonium even more so.

Because it is a conical instrument with a bigger bore size, euphonium requires more air to create a nice tone than the baritone, which has a cylindrical bore.

The trumpet also has a cylindrical bore that is significantly smaller than the bore of the baritone, which is why it requires even less air to play. In terms of air volume, the trumpet is easier to play.

However, the smaller size of the trumpet’s mouthpiece, lead pipe, and tubing creates a high resistance to air. This resistance, or back pressure, prevents air from flowing immediately into the instrument.

These aspects of the playing the trumpet do create a need for more support to play the trumpet. Air volume and breath support are not exactly the same thing.

While trumpet requires less air to play, the player must fully support the breath with their diaphragm muscles to create and maintain a nice, steady, in tune sound.

The high resistance demands a very fast air stream despite requiring a smaller quantity of air.

Are fingerings easier on baritone or trumpet?

SEE ALSO:   Trumpet or Saxophone: Which Is Easier?

While baritones and euphoniums are found as three-valved instruments, euphoniums can also have four valves.

This added valve, called the compensating valve, requires the use of a finger from the left hand while the original three valves are operated with the right hand.

The extra valve on a four-valve euphonium can enhance intonation on the instrument and also allows access to lower notes.

While it is a little more complicated than playing with three valves, it is the preferred choice for advanced players because of its tuning and range benefits.

Rather than employing a third valve, the trumpet adjusts intonation using a valve slide that operates as a trigger. This trigger extends the tubing of the third valve to compensate for pitch discrepancies.

The trigger on trumpet is somewhat ambiguous in application because the player must use their ear to determine how far to extend it.

The trigger is operated by the left hand while the valves are pressed by the right hand, so trumpet players must learn to coordinate both hands for this.

Baritone vs trumpet: which is easier for playing higher notes?

Baritones and euphoniums sound one octave lower than the trumpet, so their whole range is lower.

These instruments are not designed to play as high as the trumpet does, so we will compare if it’s easier to play high on the baritone within its own range.

Because the baritone is cylindrical, while it can be challenging to play the higher notes, it’s not nearly as challenging as it is to play high notes on the trumpet.

Playing in the high range of the trumpet is more challenging because there is little room for error.

Pitches that use the same fingerings get closer together up high on the trumpet, requiring the player to be extremely precise with their embouchure, air speed, and hearing of the pitch.

SEE ALSO:   Can You Play Chords On A Trumpet? This May Surprise You

Trumpet parts in ensemble music often feature melodic lines and solos. Being a high instrument, composers also use trumpet for big, high sounds within the texture of a band or orchestra.

Baritone parts most often contain the bass line of the music. These parts are typically less technical and simpler to learn.

There are occasions where the euphonium or baritone have a solo, but rarely are baritone solos more difficult than the solos that trumpet players see often.

Which is easier to get into a band, baritone or trumpet?

In a typical brass section of a band or orchestra, there are up to six trumpets and only two baritones/euphoniums. Although there are usually more trumpet spots, it is harder to get into an ensemble on trumpet than on baritone.

There are way more trumpet players than there are baritone players, so the competition is much higher for trumpet spots. Less people choose to play the baritone or euphonium, so it is often easier to land a seat in a group.

Baritone and euphonium are not traditionally a part of jazz ensembles. If you wish to play jazz music, trumpet would be the more appropriate choice.

Is switching between baritone and trumpet hard?

Being brass instruments, both instruments require the buzzing of the lips to produce sound. This skill transfers well between baritone and trumpet with some minor adjustments.

The specifics of the adjustments depend on the player’s mouth size, shape, and embouchure.

A student that struggles to play the trumpet may actually find more success with the baritone. The larger mouthpiece and ease in blowing is preferable for some.

However, a student struggling with the size of the baritone could prefer the smaller size of the trumpet.

A final consideration to weigh is in the music each instrument uses. Euphonium or baritone can read music in both the treble clef and the bass clef.

One isn’t necessarily more difficult than the other, but it does mean that the instruments read different notes on the staff.

For a beginner who is new at reading music, the clef won’t matter in regards to learning to read. It would be challenging, however, to change from reading treble clef trumpet parts to bass clef baritone/euphonium parts though, or vice versa.