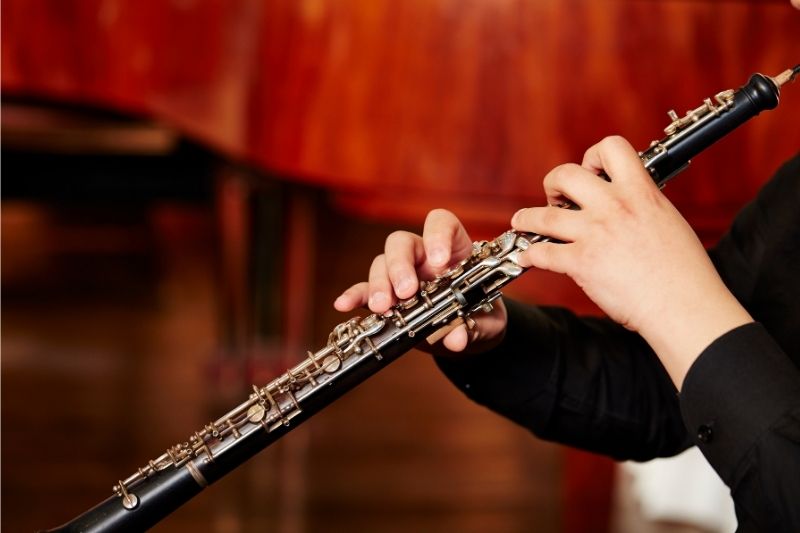 The oboe is a prestigious instrument that players practice diligently during the concert band season. With summer comes marching band season, and you may wish to continue playing your oboe all year-round.

It is generally not advised to march oboe or any double-reed instrument because it is dangerous and difficult. Marching while playing the oboe poses the risk of damage to the instrument, the reeds, and yourself. It is best to switch to a different instrument for marching band, or join color guard.

There are arguments in support of playing the oboe in marching band, and there are people who claim to do so without issue. Before making any commitments, it is crucial to consider the potential risks and hardships so as to make an informed decision.

Double reeds are fragile and dangerous to march

The double reeds used to play an instrument like the oboe are both fragile and expensive. Being outdoors and exposed to the elements, the reed is more likely to crack or split easily.

Oboe reeds can be slightly sharp, especially if damaged. Adding the speed and movement on the field can make it as dangerous as a small weapon.

Because it is delicate, an oboe reed could easily shatter from the impact of running into someone, falling, or pressing too hard while marching and playing. Having the end of the reed jammed up into the roof of your mouth can even be life threatening.

Even if you are extremely careful, oboe reeds will likely need to be replaced constantly when played outdoors. A tiny, small chip is all it takes to make a reed unplayable.

Another thing is, many oboe players craft their own reeds, which takes tools, materials, and a lot of time to master. Even if you don’t handcraft your reeds, purchasing pre-made oboe reeds can quickly get pricey.

Whether you craft or purchase your oboe reeds, they are valuable, which is why most oboe player choose to save them for indoor playing.

Oboes themselves are fragile instruments

Not only are the reeds incredibly easy to break, but the oboe itself is also fragile. Instruments tend to easily get damaged during marching season. Even sitting in the bleachers poses a threat to your oboe of being knocked around.

Also, quality oboes are made from wood highly sensitive to changes in temperature and humidity. Playing the oboe outdoors can easily result in cracks that are detrimental to its playability.

The mechanisms of oboes are extremely finicky, even in cheaper oboes. Marching and playing requires high levels of multi-tasking, and the oboe’s tricky fingerings will not be helpful.

It is also quite expensive to repair an oboe due to its complex key system. The risk of oboes being damaged is much higher when movement is involved.

Oboe embouchure demands a firm yet gentle formation of the lips around the reed. This precision is particularly difficult to maintain while marching and playing.

A good oboe embouchure consists of keeping the teeth open and apart while the lips are wrapped around the reed. This is difficult to maintain while moving around the field, making it difficult to perform.

The oboe reed is sensitive to the slightest change in pressure or placement. The sound will easily get distorted when marching oboe because of the precision required of the embouchure.

Even playing the oboe in a normal way (sitting) can be strenuous due to the pressure and support required to play the instrument.

Because the opening of the double-reed of the oboe is tiny, it is a high-resistance instrument that can be physically demanding.

Add marching in a hot uniform to that, and it can be impossible to maintain the appropriate air support.

This increased pressure makes it very hard to control your air when you’re trying to catch your breath and remain on the move. Playing the oboe while marching will be exhausting.

Oboe can hardly be heard in a marching band

Indoors, oboe is one of the easiest instruments to hear. Its timbre carries over large ensembles, so projection isn’t an issue when inside.

The sound projection of the oboe is greatly diminished when played out on the field. Without a room to reverberate in, the sound of the oboe doesn’t cut through marching music well and is hard to hear.

Players attempting to compensate for volume will tend to overplay. Over time, this leads to bad habits and poor technique from trying to play too loudly.

This means that after a season of marching oboe, you might return to concert band and have to essentially relearn to play properly. Getting rid of bad habits is incredibly difficult, so it’s best not to form them in the first place.

Tuning is an additional challenge of playing in a marching band. It is well-known that intonation is one of the major challenges of playing the oboe in general.

Because outdoor tuning is more challenging, the oboe will generally sound terrible when faced with outdoor conditions.

No marching parts are written for the oboe

Because of the issues already mentioned, very few musicians march the oboe. As a result, marching band music arrangements do not include music written for the oboe.

In rare instances where oboe is marched, players are likely given a flute part to play. Although flute music is compatible with oboe, not having your own characteristic part to play can be frustrating.

OK but… can you still march the oboe?

Despite the aforementioned problems with marching oboe, some players still decide to take their oboe out onto the field. If doing so, there are precautions to make such as using a plastic oboe and reed.

To mitigate the risks associated with taking a wooden oboe outdoors, resin oboes are sometimes used. Resin is commonly used in student model oboes because it is more durable and less costly.

Synthetic oboe reeds are more durable than the traditional cane reeds. They are tougher and last longer, though many players feel they do not play as well as cane reeds.

Using a plastic or resin oboe can aid with the temperature and humidity issues. However, that will not diminish the difficulty of physically playing the oboe while marching.

The challenges of embouchure, air pressure, and finger technique will remain the same.

You might also need to create your own lyre for music. Oboe lyres are not sold in music shops because of the recommendations against marching the instrument.

In short, it is possible to march the oboe, and some people do it, but many find that it is not worth the risk. Marching and playing the oboe is not good for you or the instrument.

Rather than attempting to work around all of the risks and challenges of marching the oboe, many players prefer to choose alternative options.

Learning a new instrument such as flute, clarinet, or saxophone for the season can be fun and rewarding.

Woodwind instruments such as the saxophone or flute are popular choices for oboe players due to the similarities in keywork and fingerings. Oboists pick up on saxophone embouchure rather easily, although the instrument is a bit heavier.

The pit and drumline are also viable options for a switch into marching season. If you feel reluctant to spend an abundance of time learning a new instrument, the cymbals are quite simple to pick up.

Some oboe players are reluctant to learn another wind instrument because of the effects it might have on their oboe playing for concert season. If this is a concern, percussion or colorguard are safe options.

If you really love playing your oboe and hate the idea of putting it away for a whole season, there is one more alternative option. With the approval of the director, you could play a resin oboe on the side-lines and remain stationary during halftime shows.

Having a special oboe set-up in the pit percussion would be a way to continue playing your instrument in a safe manner during the marching band season.