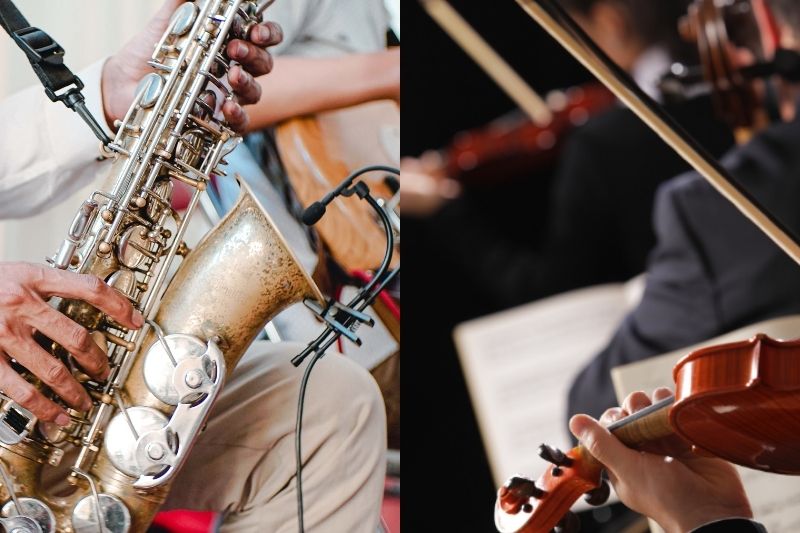 Skilled amateurs and advanced learners of woodwind, brass, or percussion instruments who are considering careers as professional musicians often wonder which of band or orchestra is more challenging.

Playing in an orchestra is typically harder than a band. Orchestral music is more complex and the fewer wind and percussion players are more exposed than in a band. Although marching bands may seem physically harder, playing demanding orchestra music is also physically and mentally taxing.

Let’s first take a look at how band and orchestra differ.

Difference between band and orchestra

The main difference between orchestras and marching or concert bands is that orchestras include strings.

Concert and marching bands only use woodwind, brass and percussion instruments, – although a band may occasionally include a double bass or bass guitar.

The other instruments are from the woodwind, brass and percussion families. Unlike a concert or marching band, however, an orchestra only accommodates one or two players of the same wind instrument, often playing different parts.

Does band or orchestra play a higher level of music?

Generally speaking, a higher level of playing technique is expected from an orchestral player. This is due to the many difficult passages to be played. This makes it harder to get into an orchestra than a band.

The players have to be able to play very difficult passages and deliver all the instrument-specific sounds a composer has prescribed.

SEE ALSO:   Which is harder, clarinet or violin? Not What You May Think

With this said, it is also true that many concert band players are technically and musically on the same level as orchestra players.

Concert bands often play arranged versions of orchestral music, and some bands are also capable of producing a beautiful and soft sound that compares very well with an orchestra’s sound, especially when playing indoors.

Orchestral music is generally perceived as of a higher standard. Through the ages, classical composers have expressed themselves more via orchestral music than band compositions.

Composers have explored the sound possibilities of orchestras and written many works with difficult and intriguing parts. This contributes to the idea that orchestral music is not only difficult to play, but on a higher level than any other music.

The band genius John Sousa once said that when an orchestra performs, it performs in the belief that it is educating the audience. When a band is playing, it entertains the audience.

Nowadays, however, the difference in level between orchestra and band music largely depends on the type of band being considered.

Is band or orchestra harder for woodwind players?

In a band, there are normally more than two players playing the same instrument. The different instruments are grouped and play the same notes.

All the oboes, for example, play the same line of music and all the clarinets play their specific line of music.

If a woodwind player misses a note or even a small passage, it may go unnoticed as similar notes are still played by the others in the group.

Since many bands (including concert bands) perform outdoors, they tend to play very loud. As a result, mistakes made by woodwind players may not even get heard by the audience.

In an orchestra, on the other hand, there are fewer woodwind players and generally speaking, only one instrument of a kind plays the line. Any incorrect note is audible immediately and a note cannot be missed.

It is also more often expected from a woodwind player in an orchestra to play a solo passage compared to a band.

One situation where a woodwind player might find playing in a band harder than an orchestra is in an marching band – see further below.

Is band or orchestra harder for percussionists?

In a marching band, the percussionist plays one instrument, whether it is a snare drum, bass drum, tenor drum or the cymbals.  In a concert band, it can be expected to sometimes play another instrument like a triangle or tambourine as well.

The rhythms played in a concert band are more challenging than in a marching band.

In an orchestra, there are generally only one or two percussionists and they have to be able to play any of the percussion instruments specified by the composer.

These instruments include ethnic instruments and instruments with a pitch like the timpani, glockenspiel, xylophone, vibraphone, marimba and tubular bells.

Is band or orchestra harder for brass players?

Like woodwind players, it is harder for brass players to perform in an orchestra than in a band.

Apart from being more exposed because the music line to be played is only played by one player, there are more brass solo passages in orchestral compositions.  These solos often require very advanced techniques.

Composers, especially in modern times, also utilize the extremes of brass instruments.  It is expected from the player to produce very high or very low notes, or to play very fast passages.

Nevertheless, some brass players find marching bands harder.  As brass instruments are generally large and heavy, it is difficult to produce a good sound and simultaneously perform steps and formations while bearing its weight.

From a physical viewpoint, being part of a marching band is typically more challenging than in an orchestra, due to the marching and instrument carrying aspects.

It is well-known orchestral players are often physically and mentally drained after a performance. Marching band members, however, can experience physical exhaustion equivalent to a sports discipline.

On the other hand, compared to an orchestra, the music played by a marching band is greatly simplified, easy to remember, and often repetitive.

As mentioned, in a marching band, several players play the same music line, and the overall sound is very loud, so mistakes are not nearly as obvious as in an orchestra.

As mentioned, in an orchestra, the string section forms the main part of instruments and provides the fundamental sound.

More difficult parts including fast passages are required from the string section throughout a whole composition.

The wind instruments don’t play the whole time while the strings do. Much more is expected from the string section than from the wind section.

On the other hand, brass instruments are of similar difficulty to strings because of the different embouchure techniques and the use of harmonics.

Is it harder to get into a band or an orchestra?

It is a lot harder to get into an orchestra than in a band. In a marching or concert band, there are more places available for woodwind and brass instruments.

The requirements to become a member of an orchestra are also higher than for most bands.  An orchestral player must be a master of his instrument before applying. New players are more easily allowed as members of bands.

When all factors are taken into consideration, it is clear that an orchestra is harder than a band to get into and to be a player in. This doesn’t mean that band music is not as important as orchestral music.

Both orchestral and band music have important roles to play, for players as well as for audiences.