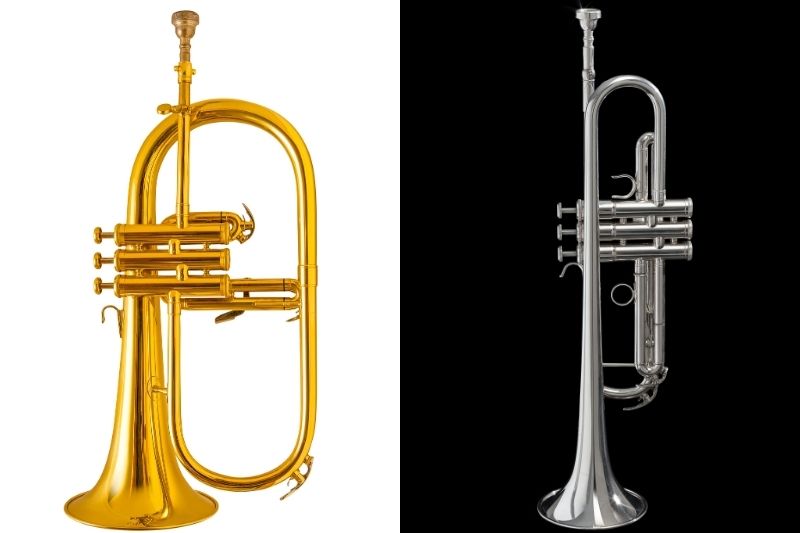 The trumpet is one of the five main brass instruments, but additional instruments are related to the trumpet, including the piccolo trumpet, cornet, and flugelhorn.

The flugelhorn is slightly harder to play than the trumpet. Playing flugelhorn involves more intonation challenges due to its conical bore and the V-shape mouthpiece, and its mellower sound does not project as easily.

On a basic level, the instruments share similar techniques and fingerings, and they are in the same key. It is crucial that you approach playing each instrument properly to get the most out of them, so I’ll examine the specifics of each instrument.

Both the flugelhorn and the trumpet produce sound by buzzing the lips into the mouthpiece. The buzz is approached in the same way, but a significant difference lies in the shape of each mouthpiece.

C-shaped mouthpieces swirl the air before it enters the instrument. This provides an overall balance to the tone due to the resistance and slower air.

V-shaped mouthpieces, on the other hand, streamline the air into the bore with a direct route into the instrument. This causes less air pressure but also makes the instrument very responsive to any embouchure inconsistencies.

How deep the cup of either type of mouthpiece varies, and players have their preferences based on their embouchure and the sound they’d like to achieve.

Mouthpieces can also be a combination of the C and V shape – that’s the case with the flugelhorn’s standard mouthpiece.

It is important to note that you cannot use trumpet and flugelhorn mouthpieces interchangeably. The shanks of the mouthpieces, which is the portion that inserts into the lead pipe of the instruments, are not the same size.

Although both instruments require proper breath support in order to produce a consistently good sound, the way the air is used varies greatly. The differences in the construction of each instrument influence the air pressure and airflow.

The larger width of the tubing means that the trumpet requires more air to play. The flugelhorn has a smaller, conical bore that requires less air.

To properly play the flugelhorn, the airflow must be reduced. If you approach playing flugelhorn with the same air pressure as a trumpet, you will be overblowing, and the quality of the sound will suffer.

Brass instruments change notes using a combination of fingerings or slide positions along with the speed of the player’s lip buzz. An instrument’s ease in changing notes with the buzz is referred to as “slotting” the pitch.

This causes difficulty in intonation, and intonation on the flugelhorn is one of the instrument’s biggest challenges.

In general, flugelhorns tend to be sharp in the low register and flat in the high register.

The “slotting” issues are caused by the conical bore of the flugelhorn, but that is not the only contributor to the instrument’s intonation issues. The mouthpiece also causes challenges in intonation on the flugelhorn.

On flugelhorn, the resistance is low which gives the lip of the player a lot of control over the intonation. In a V-shaped mouthpiece, the lip is much freer to move, which allows more room for error.

The slightest lip or buzz inconsistency will cause the pitch to go sharp or flat, so flugelhorn requires more control to remain consistent compared to the trumpet. Beginners will not have this control until they’ve practiced for a few years.

Trumpet demands a more compressed buzz that is not as free to adjust easily. This makes it easier to maintain a consistent buzz on the trumpet and therefore good intonation.

Both the trumpet and flugelhorn share the tuning issues that are a part of any three-valved instrument. The tubing of the instruments causes notes that use valve combinations 1-3 or 1-2-3 to be incredibly sharp in pitch.

Because of the inconsistency of those valve combinations along with its other intonation issues, there are flugelhorns designed with four valves. This fourth valve allows for more alternate fingerings that assist with playing in tune.

The trumpet compensates for 1-3 and 1-2-3 valve tuning issues using a third valve slide that acts as a trigger. When extended, this slide lengthens the tubing used by the third valve to adjust the pitch down on notes that use those valves.

Learning the fingerings of a four-valve flugelhorn if you’ve been playing a three-valve instrument like the trumpet is a bit challenging. But the hardest part is always to use the trumpet valve slide cleanly and consistently.

Valves are a more concrete mechanism, while a slide can be more ambiguous and difficult to utilize. How far to extend the valve slide is determined using a trained and discernible ear to hear how much the pitch needs adjusted.

Which is harder to play in the high register?

Because the flugelhorn mouthpiece allows for freer blowing, many find it easy to get high notes to sound on the instrument. You will, however, encounter more intonation issues up high on the flugelhorn.

There is little musical use for high flugelhorn playing anyways. The flugelhorn is employed for its mellow, darker timbre, which is compromised in the high register.

SEE ALSO:   Is Oboe Harder Than Bassoon? The Full Picture

The increased resistance on the trumpet will make it more difficult to get high notes to sound, but they will be more stable and in tune when they are achieved.

Which is harder to play in a band?

Because the flugelhorn has a more mellow sound, it does not project as well as the trumpet. This can be difficult to overcome when playing in a large ensemble such as a band.

This lack of projection also limits the flugelhorn’s dynamic range. It can be forced to play loud, but the sound will suffer and lose the dark characteristic of the instrument.

The flugelhorn sounds best used in solo lines. Experienced composers will write flugelhorn parts in the middle of the staff, where the instrument has the most full, warm sound.

Due to its projection and range, the trumpet is more versatile. Because of this, though, trumpet parts are often more technically demanding and feature more high register playing.

Is it hard to switch between trumpet and flugelhorn

There will always be some degree of challenge when switching between instruments. The trumpet and the flugelhorn have more in common than they have differences, so most players adjust very quickly.

The changes in the mouthpieces and air pressure will require an adjustment period for inexperienced players. Switching instruments does get easier with practice.

Players generally find that doing exercises on both flugelhorn and trumpet builds their chops in different ways, which in turn extends endurance.

It is recommended to not solely practice the flugelhorn, as trumpet players may lose their projection, dynamic range, and stamina due to the higher resistance and pressure required for playing the trumpet.

Successfully doubling on the flugelhorn and trumpet boils down to the player’s approach to match each instrument’s purpose and tendencies.

Flugelhorn is best-suited for solo moments for its dark, mellow tone and has intonation issues to overcome. Trumpet is more versatile and ideal for playing high and requires more stamina.

Keeping even their subtle differences in mind will allow the player to get the most out of playing each instrument.