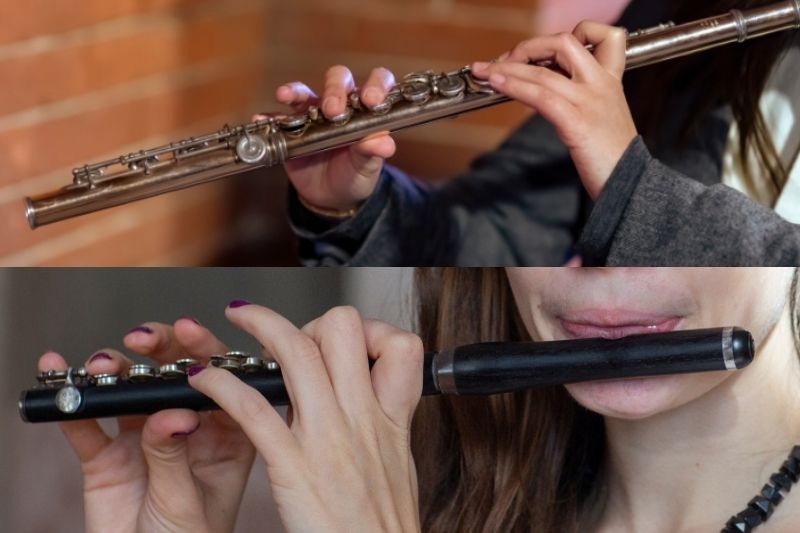 If you play the flute, at some point you might inquire about the piccolo or be offered the opportunity to play it. Because the flute and piccolo are so closely related, they have a lot in common, but which is easier to play?

The flute is easier to play and more beginner friendly because it is more forgiving and requires less endurance. Piccolo requires a high level of precision and endurance, and is challenging to play in tune.

Many assume the piccolo is just a miniature flute, but while they do have similarities, they are also quite different. Knowing the distinguishing challenges of each is helpful to any potential flute or piccolo student.

See also: Which is easier, flute or clarinet?

Differences between playing flute and piccolo

The immediately apparent difference between flute and piccolo is their sizes. The difference in size makes these instruments sound drastically different from each other.

Because piccolo is half the size, it sounds higher than the flute. The flute sounds in the octave it is written on the staff, whereas piccolo is written in the same place but sounds an octave higher.

When played soft, the sound of the piccolo is delicate and sweet, but when played loud it can be resounding and shrill. In contrast, soft playing on the flute is warm and mellow, while high playing is brilliant and full.

Overall, piccolo is perceived as louder due to its extremely high range. While both instruments are difficult to play soft in the higher register, piccolo is even more so.

One challenge of the piccolo vs the flute is that, due to its high pitch frequencies, the piccolo can damage your hearing with prolonged high register practicing, particularly in enclosed spaces. Ear plugs are a good solution – one can be worn in the right ear when practicing while keeping the left ear open for listening.

The headjoints and the opening of the mouth holes are significant in making a sound on each instrument. Depending on the shape of your lips, you might need to place the piccolo slightly higher on the lip than you would a flute.

It also feels drastically different to hold the piccolo versus the flute. The hands are further apart on the flute, so a flute player may initially feel their arms and fingers are cramped on the piccolo.

The keys of the piccolo are very closely spaced and much smaller. This isn’t usually an obstacle, but it will take a moment to adjust.

The size of the flute can be slightly cumbersome at times, especially if you started on piccolo. You will notice the difference in their weights when switching between the two. That said, both instruments are quite lightweight.

Which is easier to learn and make progress on?

While it may seem like the smaller instrument would be easier to learn, the opposite is true in this case.

The flute is more forgiving with more margin for error that the piccolo, and is found to be easier to learn. You will likely make progress faster on flute.

Being the larger instrument, flute requires more air to play, which would make it seem less beginner friendly. This is one drawback, however the piccolo presents other obstacles.

Although piccolo requires less air, it demands more strength and precision from the embouchure. The mouth hole is significantly smaller on the piccolo headjoint, so the lips must be consistently focused.

It can be easy to accidentally cover the mouth hole of the piccolo, so proper placement of the instrument and mouth is essential. This can be tedious at times, as having the instrument rolled in even slightly can inhibit the ability to make sound.

This consistent focus of the embouchure requires endurance, which is built over time.

So at first, the flute is easier to make a steady, consistent sound than the piccolo.

SEE ALSO:   Do Clarinets Wear Out? Breaking The Myth

The most difficult aspect of playing piccolo is the intonation. Your lips and ear must train to be exact and proficient at adjusting intonation as you play the piccolo.

On the piccolo, alternate fingerings are often employed to assist with pitch issues. They are used on flute sometimes too but it is far less common due to the compromise of tone, which is not experienced on piccolo.

There isn’t much beginner music written for piccolo specifically, however, method music can be played interchangeably between the instruments.

Which is easier for symphony, band, ensemble, jazz, pop?

Due to the timbre and highness of pitch, the sound of the piccolo cuts through and above any ensemble. This can be fun if you enjoy the spotlight, but a bit scary for inexperienced players.

Piccolo is uncommon in jazz or pop music, and would overpower most smaller ensembles. Flute is more suited to these genres and is often heard in jazz music.

It is very rare for there to be more than one piccolo in any ensemble. So while there will likely be a section of flutes in a band or orchestra, piccolo is more of a solo instrument, even when not playing a solo.

Playing in an ensemble makes it even more essential that you learn to adjust for intonation when playing piccolo. Being out of tune will be evident in a group situation.

Music for piccolo frequently features character qualities, such as imitating bird calls or humorous moments. Flute is often used for lyrical passages, and can blend nicely into other instrument sounds.

The difficulty of the music for each instrument varies depending on the situation. “The Stars and Stripes Forever” is a famous march that features one of the most standard piccolo features, and it is pretty difficult to play.

There are plenty of difficult flute excerpts out there too, and each contain their own unique challenges depending on the musical selection. The flute is often better suited to exposed sections of music in an ensemble than the piccolo.

SEE ALSO:   Which is harder, clarinet or violin? Not What You May Think

Music for ensembles shouldn’t be exchanged between flute and piccolo since the specific instrument is chosen and written for based on the tone color the composer desired.

Nearly every piccolo player in the music world started with playing flute. Musicians often double on both and can also specialize one or the other.

Since the fingerings are nearly identical (with a few exceptions), that part of the transition from flute to piccolo is relatively simple.

The scales and finger technique developed on the flute will transfer well, and the fingers get to be even closer to the keys on piccolo.

Usually flute players will adjust to the finger spacing of the piccolo quickly, but beware of keeping your arms and posture open and not crunched.

Maintain an open diaphragm and keep the elbows from tucking into the body, which is tempting with the piccolo being smaller.

Flute players are accustomed to a larger stream of air and opening of the lips to play and will need to decrease the size of the embouchure for piccolo. You don’t want to tighten your lips necessarily, but rather form a smaller, but still relaxed air flow.

When switching to piccolo, do not refrain from playing with strong air support like you do on the flute. Oftentimes, beginning piccolo players shy away from the prominent sound, which can lead to fundamental issues with tone.

Is it hard to play piccolo without playing flute?

It is possible to start playing piccolo without playing flute, but it isn’t recommended.

Many educators feel it is best to pick up the piccolo after playing flute for a few years. Some recommend waiting up to six years, although most flute players try it sooner than that.

Most players will find the most success and gratification from playing the flute for a few years first before giving the piccolo a try. They develop their foundational musicianship on the more accessible instrument, the flute, before venturing into the challenges of the piccolo.

Although it is more challenging to learn piccolo first, if it’s the only instrument of the two you wish to learn, it can be done. Developing a nice tone and consistency in sound will be challenging, so you’ll need determination and patience to succeed as a beginner.