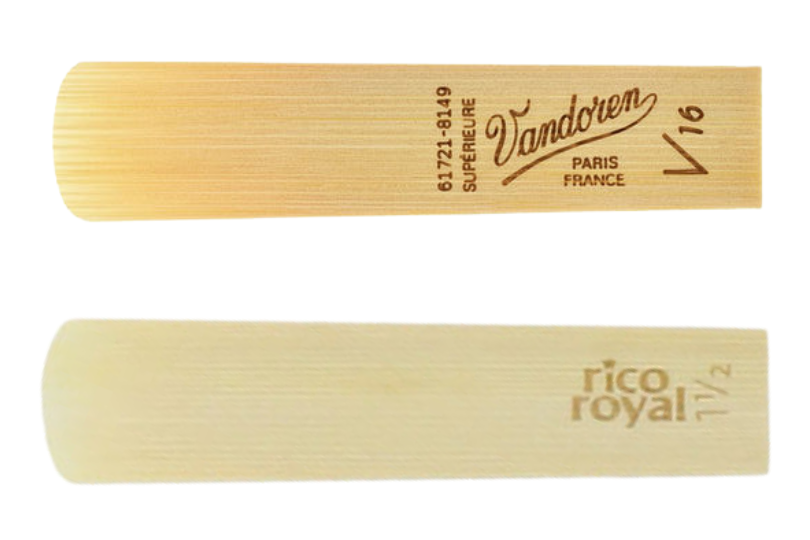 One of the big challenges for single reed players is finding the best reeds for the different styles of music they’ll be playing. Whether it’s classical, jazz or marching band, an important question is whether you should play Vandoren or Rico reeds.

Rico reeds are consistent and play well right out of the box. They are cheaper than Vandoren, come in a variety of styles for classical or jazz, and work well for marching band. More advanced classical players prefer Vandoren, but D’Addario (Rico) reeds are gaining popularity for their quality.

For classical playing, Vandoren has for many years been considered the best reed to use. It takes some time breaking the reeds in, but then you have reeds that produce a beautiful sound, with clean articulation and good projection.

There is much to consider when comparing reeds. Price is of course important, but so is consistency, durability and suitability for different types of use.

For a long time, Rico has had the reputation of being a reed for beginners. Many see the entire brand as something the student grows out of in a few months.

However, especially since D’Addario bought out Rico in 2004, Rico has been gaining new respect.

As mentioned above, the orange box Rico reeds are generally intended for beginners. But these reeds do come in strengths for an intermediate or advanced player. Rico makes a wide variety of reeds to meet players’ needs.

SEE ALSO:   How To Make Your Own Reeds For Saxophone or Clarinet

Vandoren is considered by many to be the reed anyone above a beginner should use. This is beginning to change, though, as many new brands like Gonzalez and even Légère (synthetic reeds) are coming to the market.

That said, Vandoren gained its positive reputation for a reason. They have produced a variety of high quality products for many years.

Here’s a rundown of Vandoren and Rico prices for their main clarinet and alto saxophone models:

In terms of consistency, many feel Vandoren doesn’t fare as well as Rico. Out of a box of 10 reeds, fewer than half are usually reeds a player would want to perform on. The others are good for practice or not good at all.

In general, Vandoren reeds are more durable. While Rico reeds usually play well out of the box, they don’t last as long.

Of course, all reeds will last longer if you break them in slowly and rotate the reed you’re playing on daily.

Vandoren vs Rico reeds for beginners

In general, beginners probably don’t need to use Vandoren reeds. They don’t respond as easily as Rico reeds and they usually take some breaking in to play well.

Rico reeds are really all a beginner needs. They consistently play easily and are meant for players who are just starting out. Rico Royal reeds also work well for these players.

Vandoren vs Rico reeds for classical and jazz

For the intermediate to advanced player, many feel Vandoren reeds work best for classical music. They provide a full, warm sound that the music calls for.

Try for yourself to find out the differences between the blue box, V12, 56 Rue Lepic and V21 styles.

That said, some players prefer the Rico models for classical music. They like the brilliance to the sound, namely with the Grand Concert Select or Hemke reeds.

D’Addario also makes more advanced reeds for classical musicians. The Reserve, Reserve Classic and Reserve Evolution are beginning to compete with Vandoren reeds for clarinet. The same is true of the Reserve reeds for saxophone.

Both Vandoren and Rico have good reeds available for the jazz player. The Vandoren V16 and Java are made for this, as are the Rico La Voz and Select Jazz reeds by Rico.

Players who use Vandoren reeds for their classical and jazz playing sometimes prefer to continue using them for marching band.

This isn’t necessary for everyone, though. For marching band, you need a reed that responds easily and has good projection. Rico reeds work great for marching band.

Both Vandoren and Rico make a variety of styles of reeds. Key differences between the two include reed thickness and cut.

This is the standard Vandoren reed, which is the thinnest of the Vandoren line.

It has a filed cut, which produces a darker, rounder sound. The blue box reeds have a thin tip but thicker heart, providing a vibrant but warm sound.

The V12 reeds are also filed, but they are thicker than the traditional Vandoren reeds. The thickness adds warmth and longevity to the reed.

This reed is often used by jazz players. It is unfiled and has a thicker tip to the reed, giving brilliance to the sound. The unfiled French style to cutting a reed provides a brighter, edgier sound.

With an even thicker cut, the Rue Lepic style is unfiled and has a thinner heart and thicker tip. This produces an easy-to-respond, yet warm, full sound.

The V21 is unfiled. It’s a versatile reed, liked by classical musicians and jazz players. It has good projection and warmth.

Java is a filed cut reed which is designed for jazz musicians. It provides a warm, focused sound with clean articulation.

This reed is unfiled. It has a thin blank and thin heart so it reacts quickly for beginners. Jazz players also like the orange box.

As beginners progress, they usually need to move to a reed with a thicker heart and profile so that they learn to project with support and can develop control in the high register.

Similar to Rico orange box but with a filed cut. The Rico Royal is made with advancing players in mind.

There is more thickness in the heart, which provides a fuller response throughout the register. The filing gives more clarity to the sound and better articulation response.

A more advanced version of the unfiled orange box Rico reeds. These reeds are not a good fit for French faced mouthpieces like the Vandoren 5RV, B40 and B45. Jazz musicians often choose La Voz.

These reeds combine different elements to make a high quality reed. It’s unfiled with a thin tip for easy response, but it has a thicker heart to provide a warmer sound.

Many like Mitchell Lurie reeds because they don’t really need to be broken in. However, they don’t last as long as some other professional reeds.

Part of Rico’s professional line, Grand Concert Select reeds are filed, with a traditional tip and thicker heart. This gives a quicker response and more brilliance to the tone.

This is a filed reed with a thinner tip. Beginners and professionals alike use these reeds.

These reeds are unfiled with a thick blank and heart for clarity of sound and vibrant projection.

This is a great time to play clarinet or saxophone, because there are many brands and styles of reeds to choose from. Whether you are playing classical, jazz or marching band, there are plenty of different reeds available.

Many prefer the Rico line of reeds. They are known for their consistency. The orange box and Rico Royal work very well for beginners and intermediate players. Their other styles, such as Mitchell Lurie and La Voz are preferred by many advanced and professional musicians.

The best thing to do is to try different brands and styles. Everyone is different and your playing style and equipment are unique to your playing, so it’s important to take the time to compare them for yourself.