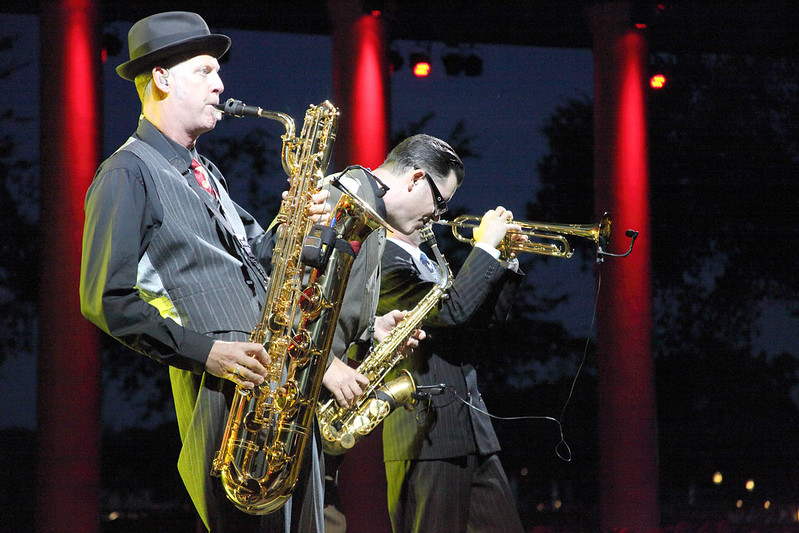 When listening to professional musicians effortlessly performing your favorite brass and woodwind music, the question might have come to mind which of the trumpet or the saxophone is easier to play.

The saxophone is widely considered easier to play. Although it requires special skills to expertly master its woodwind mouthpiece and has more keys, it usually needs less effort to produce on-pitch sounds. The trumpet requires more difficult mouth and lip positions to produce different notes.

There are, however, more aspects to consider when determining these two instruments’ degree of difficulty. These include how difficult it is to learn the basics, the different mouthpieces and the way notes are produced, the range that can easily be obtained from each instrument, and the type of music they are best suited for.

The saxophone is easier than trumpet to start with

The debate on which is easier to play, the sax or the trumpet will never end. But it’s widely accepted that it is easier to start with the saxophone than with the trumpet.  Let’s look at some of the reasons why.

When you’ve learned a specific playing technique on the sax you can skip practicing for a day or two and it will not influence what you’ve learned much.

With the trumpet, on the other hand, you’ll need to practice every day to keep your mouth and lips familiarized with the mouthpiece. As a beginner, it might be hard for you to have practicing time every day.

As the trumpet’s mouthpiece doesn’t have a reed to assist you to get the air in the instrument’s tube vibrating, you have to learn different mouth and lip positions to produce even your first three notes.

With the saxophone, you use a mouthpiece with a reed. The reed assists you to produce vibrations and your mouth movement is of lesser importance than with the trumpet.

Breathing technique is also easier with the sax, whereas correct breathing is crucial and challenging when playing the trumpet. There are fewer techniques to master with the sax enabling you to produce a decent sound.

As a learner, you may get discouraged if you can only play two or three notes on your trumpet after weeks of practicing.

With the trumpet, you might also often have to unlearn bad habits like pinching or incorrect buzzing to try to get a sound out.  On the saxophone you can get away with a lot but you can’t on a trumpet, which is a lot less forgiving.

The saxophone is a woodwind instrument while the trumpet is a brass instrument. As a result, the mouthpieces of the two instruments differ and require different techniques.

From a player’s point of view, these differences greatly affect the level of difficulty in producing a decent sound for each instrument.

As with all wind instruments, the saxophone’s sound you hear is produced by vibrating air in a column.

As a sax player you have to provide the correct airflow pressure through the space between the reed and the mouthpiece’s base to create the required vibrating air.

Sound generation starts when you have put the mouthpiece with its attached reed into your mouth and start blowing.

The airflow and the pressure applied by you on and around the reed, known as the embouchure, determine to a great extent the sound you produce.

The basic embouchure is relatively easy to master as the reed assists in providing the oscillating air. The embouchure also doesn’t have to change much when playing your first notes.

When looking at the trumpet, on the other hand, the most difficult aspect to learn is the embouchure. Like for the sax, the trumpet’s sound is produced by oscillating air in the tube.

SEE ALSO:   Can You Play Chords On A Trumpet? This May Surprise You

However, the trumpet’s mouthpiece has no reed to assist you to produce the air-vibration. Everything has to be done with your mouth and lips. You have to buzz your lips using air and vibration to make an embouchure.

With the trumpet, you have to work with harmonics to get different notes. The three valves only lengthen or shorten the tube to give another range of harmonics.

These differences in the sound-producing process make it clearly easier to learn to produce decent sounds with the saxophone compared to the trumpet.

However, it is not so easy to label one instrument as easier to play when you have to do with skilled and experienced players.

Experienced people often say that as you develop into a more skilled player, the trumpeter has it easier than the sax-player.

The layman’s perception is that trumpeters mostly play short passages in orchestras and don’t need to practice so hard, while sax-players are mostly seen as virtuous soloists in jazz ensembles and thus have to practice a lot. This is a misconception in more than one way.

On the one hand, composers like Mussorgsky have written saxophone parts into the orchestral repertoire during the late 1800s already, and on the other hand, trumpets are classified as jazz instruments as well.

Many trumpeters lead jazz ensembles as soloists. Even trumpeters who are not jazz players have challenging parts to play as soloists in trumpet concertos.

The other misconception is that as trumpeters have seemingly “smaller” parts to play in orchestras they don’t need constant practicing.  However, trumpeters like to say that if you skip one day’s practice you will know it, but when you skip two days your audience will know it!

SEE ALSO:   Can A Trumpet Play In Any Key? The Simple Facts

As mentioned earlier, sax players can skip a day or two when necessary and that will not influence their level of play much.

What is considered hard to play even for an advanced sax player is comfortably and consistently playing the altissimo register. It takes a lot of practice to perfect.

A trumpeter’s range reach increases more steadily over time and once the limits of the range are reached, the advanced trumpeter more easily reaches the notes consistently.

Thus, at an advanced level, which of the trumpet or the saxophone is easier or more difficult to play is not as obvious as when you start learning to play.

How easy is switching between trumpet & saxophone

Although playing the trumpet and saxophone require different skills, many experienced players are switching between the two instruments. It’s especially true in the Jazz genre.

Most musicians who switch generally end up mastering both instruments well. They start with either the trumpet or saxophone, and once they become comfortable with it they started learning the other.

These musicians will tell you that once you’ve mastered the technique to play each instrument at an advanced level, the question of which one is easier is no longer a factor.

That said, most agree that whether you start with the saxophone or the trumpet, it’s generally easier to learn to play the sax.

Musicians who play both instruments often agree that when you’ve mastered the skills to play each instrument professionally, the most important thing when you switch is your mindset.

As the two instruments require different embouchure, fingerings for the six keys of the sax and the three valves of the trumpet, and breath control, you have to “forget” everything about one instrument to master the other.

If you decide to take on the challenge of learning a second instrument, make sure you have enough time to practice both. Taking a few lessons is also desirable recommended to avoid using techniques from one instrument on the other.

In summary, it is easier to learn to play the saxophone than the trumpet, but if you’ve decided to learn both, you’ll experience that once you’ve mastered them both reasonably well, none is easier than the other, only different.