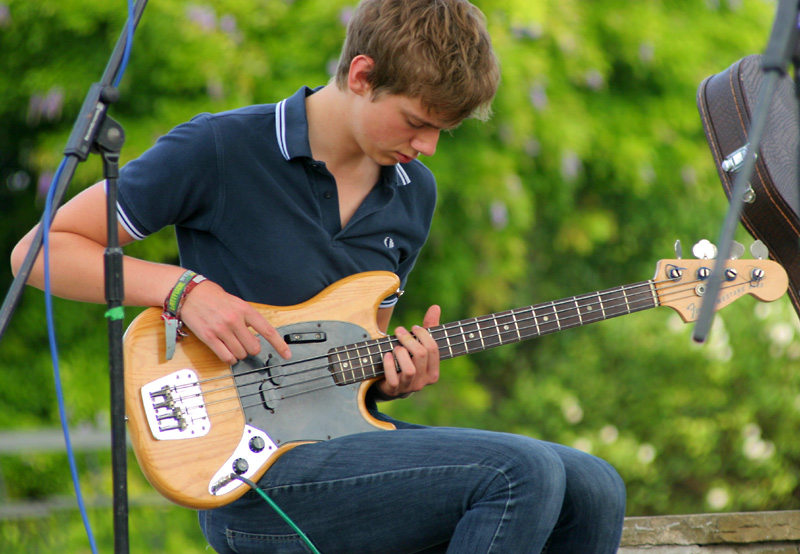 It’s a well-know fact that the bass plays an essential key role in a band and is widely considered the backbone of the music, being a bridge between rhythm and harmony. Most people who take up the bass do so for the purpose of playing with other musicians, at the minimum a drummer and a guitarist.

Newbie bass guitar players, however, often wonder if playing the bass without joining a music band is possible or even worthwhile. It certainly is. Many bass players enjoy playing the bass without a band. Some spend most of their time playing along with a drum machine, backing tracks, or song recordings. Others play the bass for creating their own home studio recordings and arrangements. Others still play the bass as a solo instrument.

Let’s take a closer look at these aspects of solo bass playing. But first, what are the main reasons for a bass guitar player not to play in a band?

Why play the bass without a band?

There are many possible reasons you might choose to play bass without joining a band:

SEE ALSO:   Bass Pick vs Fingers: Which Technique Is Better?

Advantages of playing with others

Even if you enjoy playing the bass on your own, playing with other musicians has many pros. For one thing, most learning bassists agree that playing with other people can make you a better player, e.g. by working with the drummer on timing and groove.

Also, playing music you like with people you connect with can be really pleasant. Many bass players like driving and inspiring the other musicians without having to take on a spotlight role. As a bassist, you can add character and resonance to the other instruments including drums, and lay down the harmonic and rhythmic foundation for the group.

Joining a band is also a good way to nake new friends. Same with jam sessions where anyone can typically go up and play – generally with lower expectations from the other musicians.

How to play bass without a band

Many bass players, including metal bassists, choose to primarily play outside of a band. Most find learning their favorite songs and playing along with the music enjoyable.

Neverthless, standalone bass players often admit the bass really shines when played with other instruments. Playing a regular bassline to hold a groove can be quite dull on your own. Bass players typicaly like the feeling of backing up other instruments. For this reason, many like to play with recordings.

Many bass players simple search Google and Youtube for “XYZ bass tutorial” or “XYZ bass cover” for famous songs, or “XYZ isolated bass track” for backing tracks (not as common).

A lot of “standalone” bass players (not in a band) suggest using wikiloops.com, a free website with hundreds of thousands of backing up tracks you can join with your bass – and thousands of registered musicians. For many bass players, it has long been a life-changing alternative to joining a band.

Some music games like Rocksmith also let you emulate a band by selecting the instruments and style you want(guitar, drums, keys etc). As you play, the software has the ability to listen to your bassline and will generate music to match it. Check out this simple example:

Playing bass by yourself with DAWs and/or live instruments

While some “solo” bass players focus on learning songs by ear from recordings, others use Ableton, Logic, Cubase and other digital audio workstation with virtual instruments to create arrangements and play along on the bass. These software packages have lots of built-in chord and melody loops for easily creating backing tracks.

You can easily sequence guitars, drums, synths etc. Outputting the sound from your DAW onto good speakers can make you feel just like playing in a band (though without the hassle). This is great for working on new bass tones, riffs, and other techniques.

Some bass players not playing in a band adopt a more radical approach and decide to learn all the instruments, e.g. teaching themselves the guitar and investing in a MIDI keyboard, just so they can play the bass with other instruments without the need for a band. A select few bassists have access to a real drummer, which can leas to nice bass and drum duos (Royal Blood-style).

Playing the bass as a solo instrument

Some bassists treat the bass as a pure solo instrument. Bass guitars, especially 5 or 6 string ones, have a broad frequency range from very low to high, which allows for good solo music. 6-string bass guitars are best-suited for solo bass because of the higher 6th string and the added voicings compared to a 4 or 5-string.

Playing bass as a solo instrument, that is without the presence of any other instrument, be they live, recorded, or virtual, is not for everyone however. Making a bass sound good solo is challenging, and what will work in a band may not give a good solo instrument result (the reverse is also true).

Some bassists string and/or tune (or detune) their bass in a special way to play solo, e.g. in ADGC vs EADG.

Some bass guitar players also play solo bass using a looper, which requires very advanced skills and a lot of practice to achieve.

Keep in mind, however, that “true solo” bass players (no other instruments) are relatively rare. Few people ever see a bass player on stage doing a performance on his/her own.

On the other hand, some virtuose bass players known for their bands have raised the bass to equal status with the guitar in terms of forefront presence, e.g. Bela Fleck, Primus, Red Hot Chili Peppers, Rush, Cream, Yes, etc. These bassists may also be considered as solo musicians, and do a lot of their playing outside the band.