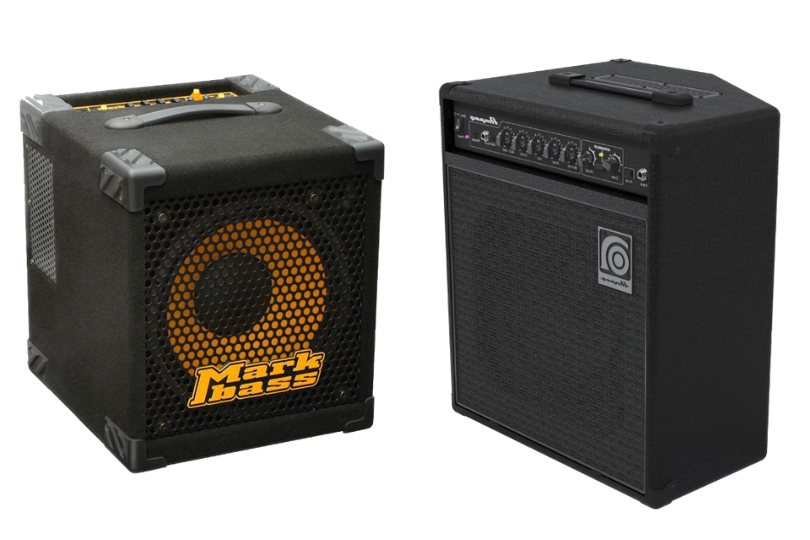 Markbass amps have a tone that is precise and modern with a signature mid-bump. They offer tons of power and volume in a compact size. They are light but can move all the air you need.

On the other hand, the weighty and expensive Ampegs have a very gritty sound and an iconic break up and growl. For many bass players, the SVT with its tonal oomph is unrivaled and always will be.

Based on large amounts of bass player feedback, comparing an SVT with a Markbass bass amp typically boils down to the tone of the SVT vs the much lighter weight of the Markbass.

Ampeg and Markbass amps both offer a delicious but vastly different flavor. Nowadays, the scale may lean in favor of Markbass because of power and portability, but that choice can be reversed by personal tone preference. If you love the Ampeg sound, you may find it hard to settle for Markbass.

Ampeg is the undisputed gold standard of amplification – a tone that many of us grew up with. It has an archetypal character ingrained in our musical memory, and subconsciously influences our tonal palette.

Markbass amps have a sensitive EQ panel and are very responsive to tone adjustments. The VLE and VPF knobs are good for dialing-in tones on the fly, but they are designed with a flat response curve and don’t color the tone like an Ampeg – bassists sometimes describe it as sterile.

The tone vs weight tradeoff

Is tone enough? An Ampeg SVT CL with an 8×10 requires herculean strength to lug around. It will outweigh most, if not all, amp head + cab combos on the market.

Some feel it is nothing short of carrying your personal fridge to every venue or studio. And, it is a really expensive fridge to boot.

Every player has practical considerations to account for when it comes to choosing amplification. Power, affordability, and portability are key factors in this decision.

At the risk of generalizing, Markbass is good for jazz, blues, and funk because it has tight highs, lots of lows, and a characteristic low-mid bump that helps the bass cut through the mix.

A Markbass comes closer than most other hybrid or SS options to the SVT tone but not close enough to qualify as the real deal. However, it has a tenth of the weight, significantly lower price, and does a good job at clean tones.

Do you have a way to lug around an 8×10? Do you have a team or technicians who will help you set up and transport the massive Ampegs?

Do we only fawn over the unwieldy Ampeg cabs because our favorite bassists use them? Isn’t there a better way to find a loud, clean cabinet, or an agreeable middle ground?

Between an SVT-4 PRO and LMIII, it is a lot easier to play all venues with the Markbass without the burden of transport hassles and weight issues.

You can pair the LM with a smaller cab (4 Ohms) or you can drop it to 4 ohms. In comparison, the 80 pounds of SVT begin to feel like a burden.

The LMIII with a 121 traveler cab (33lbs only!) can be a great bargain for anyone who wants a fat, warm tone in a light and ultra-portable amp.

Furthermore, an LM800 paired with a Tech21 VT bass pedal can get you incredibly close to the SVT vibe. With the LM series, Markbass has a real dog in the fight.

So the value is significantly in favor of MB and ‘tone’ is the only reason to hang on to an SVT.

The Markbass LMT (tube-based head) is the only gray area in this product line because the tube isn’t field serviceable, i.e. you have to send it to MB for replacement/repair. Many players may not be comfortable touring with this handicap.

SEE ALSO:   Can You Use An Amp Head Without A Cabinet?

The F1 vs SVT CL end-to-end battle is a recurring theme, representative of how the two brands compare when it comes to tone and practicality in order to decide which one to choose.

In a head-to-head comparison, the F1 does a great job with clean tones and transparency. It has more power but the SVT-CL sounds natural and clear – lush in the lows but a litter boomier and just generally fuller sounding compared to the F1.

The F1 weighs a meager 4.63 lbs compared to the hefty 80 lbs Ampeg SVT CL – that is a huge difference. You can stuff the F1 in your laptop bag or carry it with one hand.

The same significant difference is visible in the power output and price tags of the two heads as well. The F1 has 500W RMS power and the SVT CL has only 300W to offer.

The Ampeg 1×15 is fat with a rounded bottom end but it also has a good high end. It can get boomy but that is the nature of the 15” Eminence speaker (or that size driver in general).

It is only 200W RMS so it begins to break if you push too much low-end.

The Markbass 15” cabinets are deeper than the MB 210s but they don’t have as much punch.

Again, the MB cabs are quite light and roughly half the weight of any Ampeg equivalent. They also have more power and to most people’s ears, they have better clarity in the low-end.

If you are okay with less power then the CMD 121P might be a good choice. Also worth checking out is the MB 121H for its tweeters, although those can be hit or miss.

The Markbass cabs have mid-focus that makes them sound tighter and punchy – you can hear this in the MB New York 151 and 102HF.

However, Markbass lacks the massive lows that Ampeg PF-115HE, PF-115LF 410-HLF, and PF-410HLF can offer. That said, the low-end of Markbass is a lot less boomy.

Nevertheless, the Ampeg PR-410HLF is more comparable as it sounds flat without any boom in the lows even when you crank the bass knob.

The clarity and control on the lows are stellar and it goes down to 33Hz smooth. Up to 18kHz, the cab can handle the lows without getting overwhelmed.

The 410HLF is a good cab to pair with an SVT-CL if weight is not an issue.

Similarly, the MB104HF and 800 watt MB head will pair well and produce a hefty tone with a tight bottom end.

They won’t sound like an Ampeg no matter what but the value and the power-to-weight ratio is incredible if you can settle for the tone.

You can get a Markbass and add some SVT grit with a pedal or preamp like Sansamp VT bass, it does a great job of emulating Ampeg amps.

Any good overdrive pedal or always-on compressor with a tone color that you like can also counter the “sterile tone” of MB that some bassists find unpalatable.

Alternatively, if you are freshly stepping into the amp+cab world and trying to choose between the two, you can start with a Markbass head with a 1×12 for rehearsals, home recordings, and small-to-medium gigs.

You can diversify once you can afford it. Move on to an Ampeg as you progress to big concerts and pro-studio recordings.

Or, if at that point you find you love the Markbass tone, you can just add more 2×12 and get more power/volume and/or upgrade the head.

Many bass players have had success with playing an Ampeg head through an MB cab or vice versa. For instance, the LMII or LMII sounds nice and fat through an SVT-410HLF, especially if you play a 5-string bass.

Similarly, an SVT in a lighter cab can mitigate some of the weight issues without giving up too much of the tone.

Finally, Markbass makes some really good class AB amp heads. One could argue about the class D amps being sterile but those opinions don’t hold any weight among 500w MBs, which are certainly worthy of serious consideration.

They aren’t sterile by any means and can go up against an SVT and hold fort admirably.