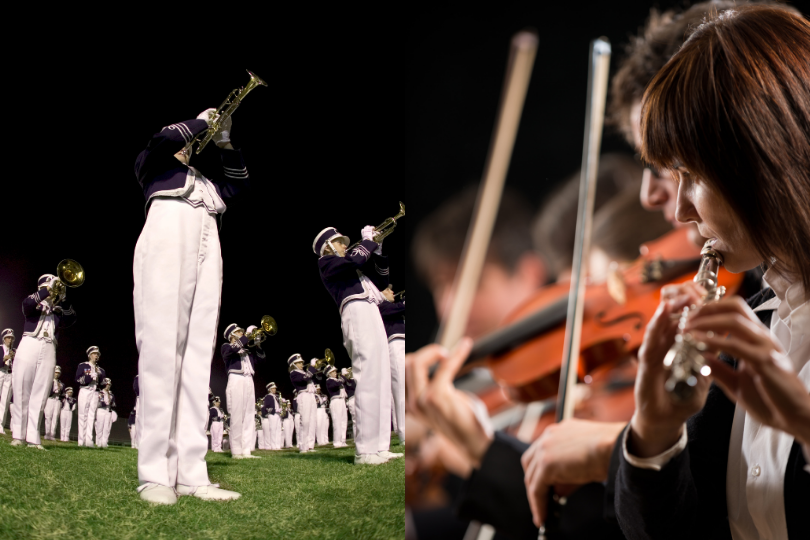 One of the most rewarding experiences as a musician is playing in an ensemble with others. In the band world, the two primary ensemble choices are marching band and concert, and each has its own experience to offer.

Musical passion vs sports and visual appeal will generally determine your choice between marching or concert band. A serious musician pursuing music as a career should typically choose concert band, while a musician who enjoys being active and a part of a show may choose marching band.

Although they have commonalities, there are pros and cons to joining either. Let’s examine which might be the best choice for you.

Marching vs concert band: which goals?

In a concert band, the quality of the musical performance is the focus. Showmanship and stage etiquette play a part in the performance as well.

Good intonation and sound quality are key goals for the concert band, with some concert bands even seeking to achieve a perfect A440.

This is best for instrumentalists who want to refine their playing while playing in a group setting, or those who seek to play in a group professionally.

While some may find the classical approach beneficial to their playing and pleasing to the ear, others may find it not so exciting – sitting and playing for the simple enjoyment and achievement of the music will not enthrall all players.

Marching band is centered around visuals and telling a story through movement along with the music played. Those who enjoy being active appreciate the athleticism required to move while play.

There is also militaristic showmanship in marching band, with commands, snappy pivots, spacing, and marching as a unit in time.

Fanfares, parades, and outdoor competition keep things exciting to participants, and the group is always striving toward creating the best show.

Every part of the production is its own art, including the color guard, body movement, and the show concept itself. Some consider marching band a larger and more gratifying canvas compared to concert band.

Often in marching band, however, less focus is placed on musical excellence. This might be viewed as stunting the growth of a player and prohibit them from achieving their highest musical potential.

Because it is indoors and does not involve marching movement, concert band has a lot less action and minimal physical requirements. Musicians sit while performing, so the visual appeal is also minimal.

The only real physical requirements include setting up chairs and stands, percussion instruments, and equipment. Also, those that play wind instruments will need to develop larger lung capacities.

Also, in the summertime, there’s little concern of heat exhaustion since you will likely rehearse and perform in an air-conditioned space indoors.

Being outdoors and centered around movement, marching band is much more physically demanding. For rehearsals and performance, players condition their bodies for the season through stretches, exercises, and drills.

The level of physical requirement vary depending on instrument. Wind players and battery percussionists (drums) namely need the physical health and stamina to endure eight to thirteen minutes of drill moves when marching.

Larger, heavier instruments such as the sousaphone, tuba, bass drum, and tenor drums require the most strength and endurance.

Sideline percussion is generally the least physically demanding – marimba, xylophone, and other accessory percussion are not mobile.

Marching is typically done outdoors, so you are exposed to the elements of weather and temperature. Marching season typically starts in the summer, with hot and humid conditions, and goes into the fall.

Marching band might not be for you If you can’t handle exercising in the heat.

Marching bands perform for sporting events, parades, and competitions, so travel is often involved. It is an excellent opportunity to visit cities and meet people.

Classical music dating back to the Medieval Age is a part of the concert band repertoire. Players get the chance to play various styles through every period and potentially learn some music history along the way.

Since it is dedicated to the music for music’s sake, concert band music provides more challenge for the players. The music is often more difficult, and you get to work with a piece of music in its entirety, rather than an arrangement.

For some, the technical demands of concert band are a deterrent, while others enjoy the challenge. Players who seek to learn the most about music and their instrument will appreciate what concert band has to offer in that regard.

A notable positive for concert band is that the music is often performed in a hall or room with decent acoustics, making the musical experience even better.

More often than not, the music is not as complex as concert band, which may draw players who are wishing to have fun rather than taking a serious approach.

For competition marching bands, you may spend up to six months on the same three to four pieces of music.

Learning the drill to march and play takes a significant amount of time. Once a show is prepped, competition marching bands continue to perform the same set of music show to show.

This provides an opportunity for better mastery, but for some players this can get redundant. Others find the music fun, and they’re able to focus on cleaning the visual component while playing the same music.

In concert band, many find the biggest challenge to be learning complex music.

In some programs, there are also solo and ensemble events, which are competitions dedicated to solo and small group performances.

These are performed before a judge who evaluates the performance, which is great for feedback but also requires much preparation.

Sight reading is a prominent element of concert band, and is required in some concert band evaluations. This is reading a piece of music, as a soloist or as a group, for the first time in completion without any preparation or practice prior.

All of the rehearsal time in a concert band is spent on rehearsing music. It is not broken up with any physical activity, which some may crave to break the monotony.

Those who enjoy learning challenging music in a relaxed environment will enjoy concert band, while those who desire physical challenge may get restless.

One of the biggest challenges with marching band is the rigorous schedule demands. Marching band participants often feel the activity dominates their life during the whole season.

Countless hours are spent perfecting every step, and the level of activity is always high, with practices in some cases lasting until 10pm.

Most marching bands memorize their music in order to move freely and watch their surroundings while marching in formations. This offers some challenge even with the less complex music.

In short, marching band is for those who crave the challenge of the outdoors and physical demands.

Marching band promotes positive attitude and excitement from its participants. Many experience an adrenaline rush as the band performs on a field in front of the grandstands.

To many, marching season is more fun compared to concert band. The football game atmosphere provides nice interaction with the public with boisterous cheering and applause.

When it comes to spirit, marching band is great for those who seek coming together to work as a team, like in an athletic setting. There are often leaders elected or assigned to assist with music and marching.

Traveling also brings the opportunity for building friendships. If you enjoy the energy and bonding of a team spirit, marching band might be for you.

Since concert band is less time consuming, the bonding isn’t as prevalent. The vibe is often intellectual and quiet opposed to the excitement of a football game or outdoor competition.

Unlike marching bands, concert bands often get subdivided into smaller groups – instrument sections. Some participants miss being able to interact with the whole band during practices.

While marching band is considered the more spirited activity, concert band provides the player with an opportunity to slow down and focus on the music. Listening to each other and growing musically as a group are a great aspect of concert band.

When deciding which to choose between concert band and marching band, it boils down to what you wish to focus on as a musician and performer.

It is difficult to have a superior sound when moving outdoors in comparison with sitting indoors with better acoustics. You must decide if you’d prefer to concentrate on the musical or the marching aspects.