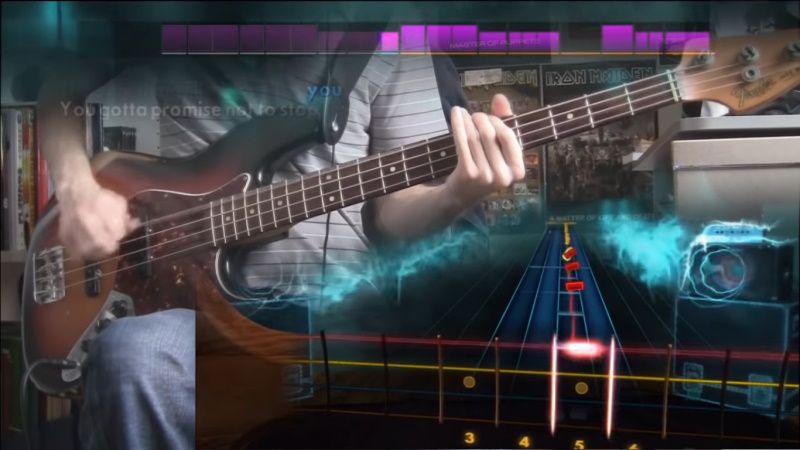 While some may feel the bass part of Rocksmith is a bit minimal and can feel like an afterthought, many learning bass players use it for fun and practice.

Is Rocksmith helpful for learning the bass? Most people agree that it can make you better by encouraging to spend more time on the bass. However, most don’t typically see it as a full-blown bass learning tool.

Beyond entertainment, however, Rocksmith helps you learn to play the bass in a few ways.

First, it gives you the motivation to spend hours practicing on your bass, making it fun and entertaining.

Third, it lets you learn songs in a playful way.

Some bass players feel Rocksmith offers the equivalent of one or two years of beginner lessons and practice.

Working your way through the short lessons, playing the arcade games, and learning the songs in a dedicated manner can make you a better bassist.

While Rocksmith is a great tool for bass learners, it doesn’t cover the full spectrum of skills and activities required to become a seasoned bassist.

For example, it doesn’t pretend to teach you theory, and playing the game can sometimes lead to some bad habits.

The features bass player generally prefer in Rocksmith are the bass lessons, the arcade-style games (“Guitarcade”) for practicing bass skills, the song-learning mode, and the session mode for jamming with other instruments.

The Rocksmith bass tutorials are often mentioned as one of the great features. Not only does the game offer very helpful short lessons on just about every technique for the bass, these lessons are interactive and highlight the places where you need to improve.

Some Rocksmith users warn the practice tracks in the lessons can feel a bit challenging in the beginning and may discourage some learners to start learning songs.

The separate song-learning feature, however, has much easier versions of songs than the lessons themselves.

Besides the tutorials and song learning features, players tend to spend most of their time in the “Guitarcade” section. This collection of cool little teaching games allows you to build and test your skills such as harmonics, timing, intervals, and string skipping.

Players recommend Guitarcade and find that after playing these games for a few days in a row, their dexterity greatly improves and learning songs becomes easier.

Another Rocksmith feature that really helps in building bass kills is Jam Mode. This feature lets you jam with a variety of AI-driven instruments that adapt and react to your playing – much more dynamic than mere backing tracks.

The Session Mode feature shows you the positions on the fretboard for scales, helping you improvise in a given key on a given track.

For some players, the interface and the dynamic jam instruments take a bit of getting used to.

Other features often mentioned as being helpful for learning the bass:

Inspiration & motivation to learn the bass

Rocksmith makes playing the bass fun and inspires you to keep playing and hence improving. It gives learners the confidence they need through instant feedback.

For a complete beginner, Rocksmith is a very good tool for trying out and testing whether they like playing the bass, for the cost of just a few bass lessons.

Most players quickly have a lot of fun with the game and get excited about playing the instrument. The game encourages newbies to start learning bass covers.

Some bass players start with Rocksmith and play every day for several months. After a while, some players move on to Youtube or mp3 songs, e.g. after running out of songs they want to learn on Rocksmith, while others join a band.

Many players, however, continue to have fun on Rocksmith.

Rocksmith also attracts players who have stopped playing the bass for a while, helping them get back into the instrument and relearn playing skills much faster.

One of the best things about the game is that it helps you learn the physical mechanics of playing a bass guitar in an entertaining way.

The game also teaches you to play without looking at the fretboard, a common problem among newer bass players.

One caveat sometimes mentioned is that Rocksmith has very sensitive note detection and sometimes incorrectly flags notes as being wrong due to the player applying too much pressure onto the string.

This can be somewhat relaxed via the settings, however.

Rocksmith’s main benefit is that it encourages bass learners to practice continuously and spend tons of time on the instrument, being so much fun.

Whatever your bass level, the song learning feature of the game really helps you to learn new songs.

While Rocksmith’s built-in song list is limited and may quickly feel boring, there are tens of thousands of user-made downloadable song tracks (DLCs), many of which of good quality.

For example, Rockmith users often recommend the song “Blitzkrieg Bop” for beginners as it has simple to learn bass line and is also great for finger warm up.

“For a fool” (The Shins) is not as repetitive and is more exciting to play yet without being overly challenging for new players.

Having an interactive jam track is highly beneficial and motivating for a bass learner. It makes daily practice a lot of fun and is a great learning tool, particularly for complete beginners.

These players use Rocksmith to learn songs before moving on to play them through an amp. Many bass learners really get involved in Rockmith and play 2-3 hours per night for months. Most see noticeable improvements in their playing as a result.

The Master Mode feature allows the visual cues in Rocksmith to fade away once you reach a certain level, forcing you to play by ear and from memory.

This helps you transition away from Rocksmith: after a while using the game, learners are able to play songs using only normal backing tracks, without visual support .

Cons of Rocksmith for bass learning

While Rocksmith has some great advantages as a bass learning tool, it also has a few drawbacks.

For one thing, players often complain the game tends to train their brain to respond to visual cues vs audio ones, which fails to stimulate ear training.

Another con of learning through Rocksmith is that players typically don’t anticipate the music, focusing instead on playing the immediate bass notes through sudden moves.

This may work great for finger strength and speed training, but isn’t so helpful for overall bass skills and musicianship.

This limitation, however, can be alleviated somewhat by consciously trying to look at the measure ahead and playing a little before hitting the notes on screen instead of just waiting for them.

SEE ALSO:   Bass Guitar vs Cello: How Different Are They?

Another caveat is that, since Rocksmith bass players primarily follow prompts on screen, at least initially, they typically fail to memorize the songs and are often unable to play them outside of the game.

Learning the bass with Rocksmith can also result in some bad habits, such as depending exclusively on the screen to find your notes or play a song, or having bad left or right hand placement.

Many players focus on hitting all the notes on the bass track without paying attention to their form.

Users also point out the lack of music theory instruction in the game – something Rocksmith doesn’t claim to offer. Neither does it teach you to read music, play chords, or mute strings when playing progressions.

For some players, Rocksmith also tends to make you tolerant of sloppy rhythm – as you’re only concerned about passing the stages of the game.

Rocksmith is also mostly useful for learning 4-string bass. A 5-string bass can be used with the game but there are no songs using the low B. Nor does the game’s graphics feature a 5-string fretboard.

So Rocksmith does has its limitations as a bass learning tool. The consensus is that Rocksmith by itself can’t really take a learner beyond an advanced beginner level.

Regardless, it can be a great complement to more traditional learning approaches e.g. bass lessons and books.

For people learning through lessons and music theory books, Rocksmith provides a welcome break from classic exercises, allowing the learner to play songs and have a good time.

The game helps take the boredom out of music theory lessons and scale practice.

Using a combination of a bass tutor for technique and Rocksmith for fun practice can be a winning combination. Young students using such mixed approach tend to stick to the instrument, and often keep playing daily for years without getting bored.

Some people suggest actually getting lessons to learn proper form before starting using Rocksmith to prevent bad habits and form settling in later on.

As mentioned earlier, some more advanced bass learners use Rocksmith to learn songs and then switch to all-audio backing tracks with no visual support and screen distraction, in order to improve their ear playing and music memorization skills.

Learning music theory is important for a bass player, and should typically be learned in parallel with using Rocksmith.

Practice consistency, however, is just as important, and Rocksmith can really help you stick to that 30-60 minute a day bass practice schedule you set for yourself.