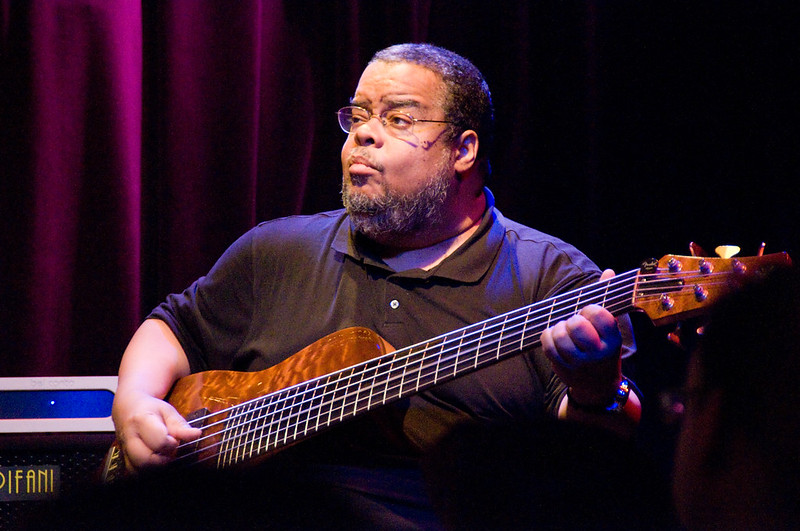 The standard right-hand technique for playing bass guitar nowadays is plucking the strings using the first and second fingers alternately.

Thumb plucking, however, has always been used as well. If you’re learning the bass, you may be wondering whether thumb-style technique is acceptable or if it’s a bad habit to avoid.

The warm and thick tone results from using the fat and wide plucking surface of the thumb, in a mostly downward motion.

Using the thumb is the best way to get the fattest tone from your bass for certain music styles. The thumb is also used as part of slapping and fingerstyle techniques, which add wealth to the range of sounds that can be achieved on a bass guitar.

See also: How to get a punchy bass tone

Thumb plucking was historically the original technique on the electric bass in the 50s and 60s. Early bass guitars actually had a finger rest (aka “tug bar” or “thumb tug”) below the strings on the pick guard for anchoring the fingers while plucking with the thumb.

Many bassists mix in thumb and other fingers for plucking – thumb for the low strings, fingers for the higher ones – to add different dynamics to a song. This is typically in combination with palm dampening as in root reggae music.

See also:
How to dial in a great dub bass tone
Best bass guitar for reggae

As mentioned, the standard technique is alternate first and middle finger plucking, why resting the thumb on the guitar or on a lower string.

The same finger is often used several times in a row when moving from a higher to a lower string. This 2-finger approach has its roots in upright bass pizzicato style.

SEE ALSO:   Can You Play Bass Without A Band?

Muting is an essential aspect of playing the electric bass in order to obtain a clean sound. Thus, “standard” right-hand bass technique uses the thumb (and/or third and fourth fingers) to mute lower strings when playing higher ones.

While most bassists use a 2-finger plucking approach 90% of the time, advanced bass players use a mix of thumb only, classic 2-finger, or thumb + index + middle + ring to reap different sounds for different songs.

For some songs you may also choose to play with a pick, or slapping – hitting the strings against the fingerboard with the bony side of the thumb / pulling the strings so they snap back against it.

Bass learners sometimes find plucking with the thumb easier and more natural when getting started on the bass. 2-finger techniques require more practice, although they’re facilitated somewhat on bass guitars that offer a good thumb rest e.g. the top of a pickup.

For regular bass players, switching between 2 fingers, thumb, and pick playing can reduce the stress on the right-hand and allow it to rest.

Thumb-style plucking is well-suited for slower songs as it encourages you to slow down and play fewer notes than you would with 2 fingers.

Thumb playing on the down stroke can produce an old school, Motown-type sound, e.g. on a Precision bass fitted with flatwounds and a sponge under the strings near the bridge for thuddier tones.

This helps produce the best tone, namely for latin and regage – a full, even, vintage-sounding tone resulting from the soft meat of the thumb.

Combining the thumb with the first finger is great for palm-muted songs and for double stops (multiple strings played together). Thumb-only bass picking, however, sounds less aggressive and rough than regular fingerstyle, producing a softer and rounder tone.

Bass players who primarily play with a pick, when dropping the pick feel more comfortable using a combination of thumb, index, and middle finger vs the standard 2-finger approach.

Although plucking with the thumb is generally not as fast as two-finger plucking, some bassist get close to matching the speed. When really high speed is required, they can easily switch to fingerstyle in specific parts of a song.

Cons of playing bass guitar with the thumb

Using your thumb only can also lead to your getting a crippling blister sooner than when using 2 fingers, hindering your practice. The thumb will need to develop calluses, until that point the tip of your thumb is likely to be raw.

Playing with the thumb + one finger is also a faster option, but the first + middle finger technique lets you pluck from the same angle leading to a more consistent bass tone and volume.

While the thumb produces a fatter and meatier tone, 2-finger plucking will usually give you more control and expression and make it easier to play fast staccato.

Thumb-only technique works fine for certain music styles but intense patterns like funk grooves with syncopated 16th and octave notes will be much harder to pull off.

In general, using only the thumb as your plucking technique on the bass can be limiting as it restricts the range of options you have for attacking the strings.

See also: How hard should I pluck bass strings?

Thumb playing technique on the bass

Experienced bass players who play with their thumb utilize different techniques. Some only thumb downstroke, which allows them to get a fatter sound (more meat on the string).

Others, including old school players, use the “double thumb” technique, sweeping up and down with their thumb like using a pick.

These bassists often use their thumb up and down “pizzicato” style. Getting good velocity for playing various music styles this way – beyond simple reggae grooves – takes a lot of practice.

Bass players who play with the thumb tend to position their arm differently than when plucking with the first and second fingers. Thumb-style generally involves more arm movement vs a more static arm position with the 2-finger approach.

Bassists who primarily pluck with their thumb also tend to combine it with their first finger in fingerstyle approach when playing faster lines and solos – the other fingers will typically join in naturally.

Thumb and middle finger are often used to play octaves – with the first finger muting the string in the middle.

Better endurance is usually achieved for longer bass sessions by mixing up plucking methods, even for players with fast thumbs.

See also: What is the best bass guitar for big hands?

Using the thumb for plucking lends itself well for a walking bass (fatter sound) or for quiet intros. Plucking near the neck with the thumb provides a softer attack and a deeper timbre for ballads.

Thumb playing works great with palm muting as the right hand is in an ideal position, with your palm closer to the bridge. Using the palm to mute the strings more or less while plucking with your thumb allows you to “fatten” or “soften” the notes as you choose.

Palm muting + thumb playing produces a result similar to placing foam under the bass bridge, but with added flexibility as you can easily vary the amount of dampening.

When using the “normal” 2-finger plucking approach, muting also can be achieved using the thumb. Your right hand thumb can mute the lower strings (E and A on a 4-string bass) while your left hand mutes the higher strings by resting the fingers on them.

Some bass players use a thumb pick for longer sessions and combine it with palm muting for a more percussive sound.

Good bassists who play with the thumb

I’ll wrap up with a few examples of great thumb-playing bassists: