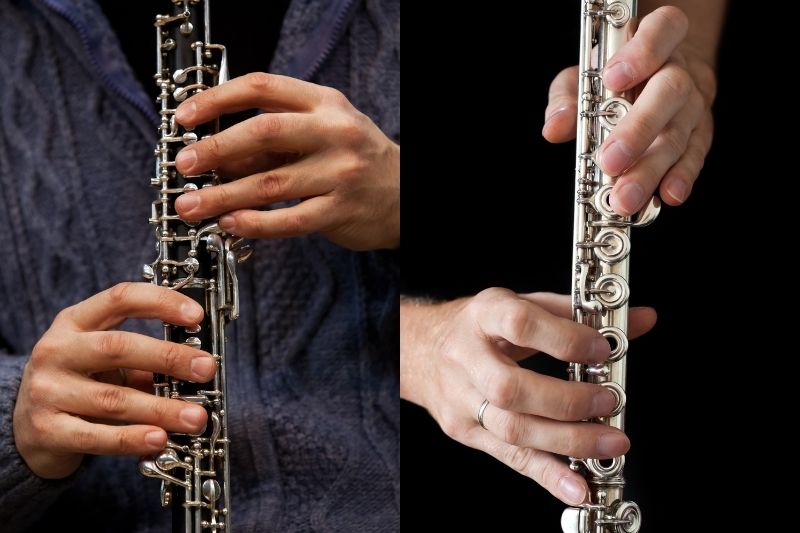 As the two woodwind instruments that play the highest notes and lovely solos, flute and oboe are often compared to each other. While each contains its own unique challenges, is oboe considered harder than flute?

Oboe is one of the most difficult instruments to learn to play and is harder than flute. It takes years to develop a nice tone on oboe and learn to craft reeds, and the instrument requires more endurance overall.

Of course, this doesn’t mean it the oboe is not worth the effort. Examining what specific challenges there are on each instrument should also be taken into account when comparing the two.

Difficulty of getting a decent sound initially

Initially, it can take time for a beginner to even produce a sound on the oboe. The opening of the reed is very small and requires extreme precision and correct air pressure to create a sound at all.

Creating a sound on the flute also takes some effort at first. Forming the embouchure and aiming the air properly may take some experimentation, but most students are able to quickly get something to come out.

A beginner flute sound often starts out slightly airy, but will still be palatable. Oboe sound is difficult to control, and it might sound similar to a honking goose for a while.

Because the oboe has two reeds to vibrate, beginners may find it challenging to get the instrument to respond right away. Flute is much simpler to get the air to connect and make sound.

No reeds vs making your own reeds

The quality of your sound on oboe is heavily influenced by the reed. Pre-made or manufactured oboe reeds can be purchased, but will never be to the same standard as handmade reeds.

As they progress, oboists learn to make their own reeds, by hand, which is a specialized skill in itself. It takes a lot of attention to detail and practice to cut and shape reeds, but will guarantee a quality reed made exactly the way you need.

Crafting reeds is a time consuming task, especially without experience, and requires specialty tools. Taking into account that an oboe reed will last for 10-15 hours of playing, you will be spending a lot of time creating reeds every 2-3 weeks or so.

The flute requires no reeds at all. Flutists do not have to spend any extra time creating anything for their instrument, and can solely focus on practicing their music rather than making reeds.

Both instruments require good breath support and control, but vary greatly in how this is approached. When it comes to the amount of air and how it’s used, flute and oboe are basically the opposite of each other.

On flute, the player takes large, deep breaths, and likely uses all of their air while playing. In fact, young flutists often run out of air and must expand their lung capacity to make it through phrases in music.

This is often described as back pressure, since the oboe cannot physically take the amount of air you’d inhale in a normal breath. In fact, oboists have to exhale at the end of phrases because of excess air.

So while flutists will take large, open breaths to begin phrases, oboists will exhale old air and then inhale a small amount of air to continue playing.

On the oboe, it is essential that stale air be exhaled, which flutists will never be concerned with due to using their air.

Each instrument contains its own unique embouchure challenges that players face throughout their time on the instrument.

On the flute, there is a lot of room for error in placement. With flute, placement of the headjoint and mouth hole can be tricky to find. You cannot roll the instrument out or in, and it must be centered correctly beneath the lip before the air stream can connect.

Placing the flute too high or low on the lips will also cause issues, and only a small amount of the embouchure hole should be covered. Aiming the air into the mouth/embouchure hole can be difficult to master as well.

SEE ALSO:   How Long Does A Clarinet Reed Last?

The exact shape of the lips and how you form them varies by player, but in general, the air should be aimed at a downward diagonal angle into the flute. It’s like finding a magic spot.

The shape of the lips for the double reed of an oboe is difficult to create. The reed is placed on the bottom lip, which is then rolled over the bottom teeth, and the top lip rolls in to be placed on top.

Because the reed is so tiny, the aperture must be tiny as well. Control of these muscles in the lips takes a lot of time and practice, and requires an abundance of strength and endurance.

Many beginning oboists “bite” down on the reed too hard and close off their sound. The opening of the mouth should be a precise but relaxed oval, without too much pressure.

While it can be challenging for beginning to intermediate players to learn to tune any instrument, oboe is one of the hardest to tune. This is because there is no way to adjust the instrument.

On the flute, the headjoint can be pulled out or pushed in to assist the player in correcting pitch. Some adjustment by the player will still need to be made for certain notes, but nothing drastic.

There isn’t a way to adjust the oboe, and the reed is made to be placed on the instrument all the way. All tuning is done by the player loosening or tightening their embouchure and adjusting their airflow accordingly, which requires muscle and ear training.

It doesn’t help that the slightest change in temperature and humidity affects the reed. Crafting quality reeds and carefully maintaining them will help with tuning on oboe.

On the oboe, because of its conical bore, no scale is perfectly tuned. This is compensated for with alternate fingerings or using cross fingerings, which can be tricky to remember and use.

There are pinky keys on both instruments, but several more on the oboe. The oboe also has an octave key for the thumb, which the flute does not have, and sometimes requires a half hole covering.

Difficulty of oboe vs flute parts

The flute is a technically proficient instrument and is designed to play fast passages of extreme difficulty. These fast passages will still require diligent practice to play well, and composers take advantage of the instrument’s proficiency by writing demanding music.

SEE ALSO:   Is Playing Clarinet Bad For Your Teeth?

On the other hand, oboe music is not as technically demanding because the instrument has more limitations. There are flute parts that would be impossible for the oboe to play.

Challenges in band or orchestra

In an orchestra, the principal oboist has a major responsibility within the group. It is tradition for the orchestra to tune to the oboe, which creates pressure on the player to maintain accurate pitch.

Also, the oboe is often used as a solo instrument in ensembles, so having a beautiful tone is important. The sound of the oboe carries, so it is easily heard.

Flute parts tend to be more technically demanding in both band and orchestra.

Flute to oboe and oboe to flute: how hard?

Because there are some shared fingerings and they are both woodwind instruments, musicians often consider switching between the flute and oboe.

The biggest challenge to transitioning between these instruments is adjusting to the different air requirements.

When switching from flute to oboe, you must learn to exhale before inhaling between phrases, which is counterintuitive to a flute player.

The back pressure will feel drastically different from the low resistance of a flute, and your lips will hurt after playing for a length of time.

From oboe to flute, the opposite challenges will occur. You will need to learn to take in way more air than on oboe, and you will feel constantly out of breath.

With the flute being a transverse instrument, your arm may become fatigued from holding up and out to the side while playing.

The embouchure on the flute is much freer, so oboe players will need to work on loosening up and aiming the airstream downward.

Not only is the oboe considerably more difficult to play than the flute, it is also more expensive. That doesn’t mean it’s not an instrument worth investing in for the right players, however.

If you love the sound of the oboe, passion can overcome the challenges and obstacles encountered along the way. Oboe can be very rewarding over time.

Because it is less expensive and easier to play, there are more flute players than there are seats in professional ensembles. Oboe players are more rare, so the demand for good oboists is much higher, and the seats are less competitive.