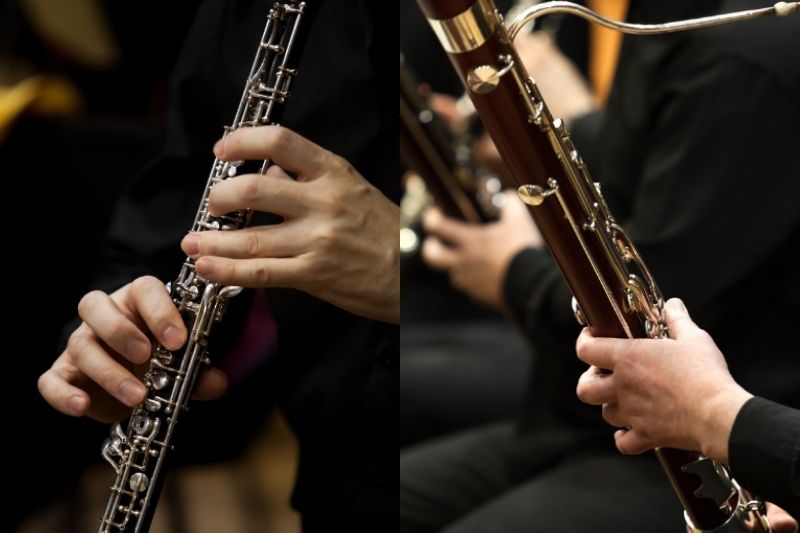 Within the woodwind family, oboe and bassoon are considered to be color instruments that use double reeds. With the oboe’s reputation for being a difficult instrument to learn, one might wonder if it is harder than the bassoon.

As two of the top most difficult instruments, the oboe and the bassoon each take a lot of diligent practice and resilience to master. In this post, we look at their comparative difficulty and at how challenging switching between the two is.

How hard is it to get a decent sound on oboe vs bassoon?

The reed opening on the oboe is smaller, so it can be challenging to use the proper air pressure to get a sound. Once a sound is produced, it is incredibly difficult to control and won’t sound pleasant initially.

Due to its larger reed size, the bassoon is much easier to achieve a sound. Most players find that it is much faster to create a nice tone on bassoon – although experiences vary.

Due to their double reed nature, the sound of beginners of both instruments is often described as a honking goose or duck. Because it is easier to learn to control, bassoon players usually develop a pleasant sound more quickly.

On either instrument, it is essential that the player not clamp down on the reed, if so, there will likely not be no sound.

Bassoon is a large and heavy instrument, and learning to balance and place the instrument often proves awkward to start. A strap called a seat strap is employed to assist.

The bassoon requires a seat strap on which the player sits in order to anchor the weight of the instrument against the bottom of the chair, which requires proper adjustments in relation to the height of the player’s torso.

An improper seat strap position can make things more difficult, so be certain not to overlook this important detail.

The physical size and weight of the bassoon might present a great challenge for those with smaller hands. It is also too heavy for easy transport and handling for smaller players.

In comparison, the oboe is much smaller and lighter, and the weight is held by balancing the instrument between the hands and face. Straps are not necessary for playing the oboe.

Is oboe or bassoon harder for fingerings?

When it comes to fingerings, both instruments have their own challenges. However, due to its size and mechanisms, the bassoon is generally considered to be more challenging for fingerings.

Alternate fingerings are used to produce specific timbres and dynamics. While fun to discover, these are difficult to remember.

The role of the thumb is particularly distinctive on the bassoon, and the left thumb alone operates around ten keys alone.

Due to its size, the distance between the finger holes on the bassoon is significant. On the top of the instrument, the tone holes do not use keys, so the fingers must stretch and cover the entirety of the hole to play accurately.

The Oboe does not have nearly as many keys as the bassoon, and the keys are much closer together.

The oboe and the bassoon being both double reed instruments, they have shared challenges in regards to embouchure and reeds.

SEE ALSO:   How To Practice Clarinet Quietly (Love Thy Neighbor!)

The embouchure of both the oboe and bassoon is similarly formed with the lips forming a rounded aperture around the end of the reed opening, with the lips acting like a drawstring and applying pressure from all sides.

On the oboe, the reed rests on the bottom lip, is brought in from below, and about ⅓ of the reed goes into the mouth. The smaller reed creates the challenge of keeping a steady airstream, making it difficult to maintain a good tone.

With the bassoon, the reed is attached to a bocal, a curved metal tube that connects the reed to the instrument. The reed goes straight into the mouth and not from above or below, and the reed is much larger and wider than the oboe reed.

Because it is smaller, the oboe reed requires a much higher level of pressure to play, while the bassoon is a more open and relaxed embouchure.

Crafting oboe reeds requires more precision due to their smaller size, and is therefore more time consuming to create.

Due to the high pressure, airstream, and high frequency vibration, oboe reeds last for around two weeks, while bassoon reeds often last a few months.

Intonation: is oboe or bassoon harder?

Tuning is extremely difficult with both instruments because neither is easily adjustable.

You can’t pull out or push in anything like on other instruments, because the reeds on oboe or bassoon are designed to be placed all the way onto the instrument or bocal.

In general, adjustments will be easier to make on larger instruments versus smaller ones. The size of the oboe reed demands higher precision and provides less room for error than the bassoon.

Tuning for both instruments relies heavily on crafting quality reeds and maintaining them in an appropriate container. Students of either instrument should prepare for extra ear training as a part of their practice.

Oboe vs bassoon: which has easier music parts?

Bassoon is often relegated to playing the bass line, so in many cases it will have more simplistic parts to play. The more complex bassoon parts emerge as you get into more advanced music.

Although bassoon doesn’t get the spotlight as often, there are iconic excerpts of music that showcase the unique and colorful timbre of the bassoon.

Is oboe or bassoon easier to play in a band/orchestra?

The bassoon has a mellow tone quality that blends well with every section of a band or orchestra. The bassoon is a versatile instrument that gets to play both low brass lines and upper woodwind sections.

The oboe is a very popular choice for solo sections because of its colorful, expressive tone. Its limited range of notes and dynamics, however, may limit its uses in an ensemble setting.

The bassoon has a wider range than the oboe, so it is more active in lower registers. It is often nicknamed “the clown of the orchestra” because of its ability to produce quirky sounds in its extreme registers.

The oboe’s distinct and prominent timbre makes the oboe ideal for playing the tuning pitch for the group.

How hard is it switching from oboe to bassoon?

Many oboe players find the switch to bassoon alleviates the issues they may have had with playing the oboe in regards to the pressure of the reed. The blowing used to play the bassoon is much freer and more relaxed.

Oboe players will also need to adjust to the new angle of the reed along with a more open, relaxed embouchure.

The fingerings of the bassoon can be overwhelming for an oboe transferee. As mentioned, the bassoon is distinctly different from any other woodwind as far as fingerings go, including the oboe.

Also, the difference in spacing between the fingerings is often tricky to acclimate to at first.

Learning to properly place the seat strap can also take some practice. Once adjusted to the size of the instrument and reed, however, an oboe player may find a lot of success in switching to the bassoon.