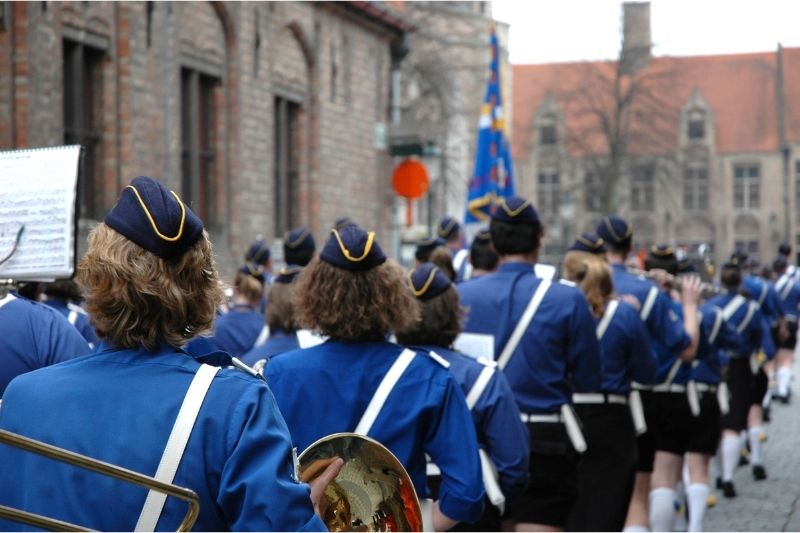 For decades, marching bands have been entertaining sports fans and parade attendees with their powerful sound and flashy moves. Participating in a marching band is incredibly fun and rewarding, but is it hard to do?

Marching band is a physically and mentally demanding activity that requires hours of rehearsal and training to achieve a high level of performance. Participants must develop coordination, endurance, strength, and athleticism and be able to muli-task well.

For many, the effort is worth the reward, and various band programs train their performers to succeed. Knowing what exactly to prepare for and expect is helpful. Let’s discuss what marching band entails.

To some, marching band appears to simply be walking around while playing an instrument or performing choreography, but there is much more to the activity than what meets the eye.

First, proper marching employs specific techniques for the way you move your body and feet. The performer must be able to maneuver quickly on the field while playing their instrument.

The movements of the wind players and drumline must be controlled and precise so that the upper body remains steady while playing.

If not, tone and breath support will be compromised, and those with larger instruments will struggle to move quickly.

Instruments such as drumline instruments and the tuba/sousaphone are heavy. Tenor drums can weigh over 30 pounds, which demands a large amount of strength and stability from the player. Large instruments are also cumbersome to manage.

Not only is marching band physically demanding, it is also mentally challenging. Memorizing music, drill, and choreography is an extensive process that must be rehearsed and perfected for hours.

A marching band show is usually between eight to fifteen minutes, which is three to four tunes to memorize.

The players and colorguard must also remember dozens of positions within the drill and reach them at specific points in the music.

Is marching band a real sport?

According to the Oxford Dictionary, a sport is defined as “an activity involving physical exertion and skill in which an individual or team competes against another or others for entertainment.”

Because it is also a performing art, there has been a lot of debate over whether or not marching band should be considered a sport.

Competitive marching bands physically condition members to prepare them for the demands of the activity, much like a sport.

Band members must be in shape to endure the entirety of the show, and they train all season to build speed, precision, and stamina.

In many schools, marching band counts as a PE credits because it is as active as participating in a sport or gym class.

How challenging the music is partially depends on the level of the group in which you participate.

Marching and playing requires an immense amount of concentration and coordination. First year marchers will initially struggle to play at all while marching.

Competitive marching bands and drum corps design their shows with challenging music meant to impress the audience and judges. Some passages of the music will be technically challenging to show off what the musicians can do.

There is also typically a ballad within the show to showcase the lyrical playing of the musicians. Although these may be slower songs, the players must focus on breath control and their attention to detail to effectively deliver the music to the audience while performing maneuvers.

How many hours does a marching band practice?

Band camp for most marching bands is all day every day for a week in the summer. A typical band camp day is eight to twelve hours long and full of training, rehearsing, and team building activities.

A majority of rehearsal time for marching band occurs in the spring and summer seasons. The performance season usually begins in late summer and lasts through the fall.

Some bands also include a week of pre-camp, and there are bands that have two-week long band camps.

DCI groups extend this into a summer camp, which is a month of all day rehearsals, Monday through Friday, to prepare the show for the season.

At high school level, marching bands practice anywhere from a few times a week to everyday after school. Practice sessions can range from a couple of hours to several hours long depending on the intensity of the program.

In college, it isn’t unusual to have daily evening rehearsals during the week and rehearsal on gameday. Some college marching bands such as the Texas A&M Marching Band rehearse up to 40 hours a week.

Which section of marching band is the most challenging?

Each section of marching band has its own unique challenges that range from the difficulty of the music, the weight or size of the instrument, or the air required to play.

The color guard is often considered to be the most physically challenging. Color guard involves spinning flags and other props, dancing, running, and jumping.

In some shows, the color guard has to make several equipment changes, and the choreography can be a lot to memorize.

In terms of physical exertion, playing in the drumline is a comparable challenge to the demands of color guard. In fact, it is common for the color guard and the drumline to have extra rehearsals due to their unique challenges.

Members of the drumline must physically prepare their bodies for the weight and size of the drums. They have to be able to carry it easily so that they can focus on playing and executing the drill.

Drummers must also learn a special marching technique called the crab step, which involves crossing the legs in front of each other while marching side to side.

This is because the size of the instrument and the harness do not allow for the torso to twist.

Is marching band harder than football?

In some ways, marching band can be considered harder than football, but whether one is harder than the other is ultimately situational.

On the other hand, a football team that trains hard and wins every season might be harder to participate in than a non-competitive show band.

For marching band, playing an instrument and marching at high speeds can be physically exhausting, but so is playing an entire football game.

You are more likely to get injured playing football vs performing in a marching band, since it is a contact sport unlike marching band.

All in all, though, the physical demands of each are unique and hard to compare.

The time commitment of marching band is often higher, considering the marching band has rehearsals, attends the sporting events, and has their own competitions and parades to perform.

How hard is it to get into college marching band?

To try out for the Ohio State University Marching Band, candidates must perform scales, sight read, memorize four specified songs, and perform from an assigned tryout sheet determined by instrument.

There is also a marching portion to the audition, and many people dedicate their entire summer practicing for their audition. The OSU Marching Band marches only brass and percussion instruments.

The Purdue “All-American” Marching Band requires students auditioning to attend their band camp all week and notifies them if they made it on that Friday. There are also assigned musical excerpts to perform.

To get into the Michigan Marching Band, wind players prepare chromatic scale and two-four minutes of prepared music. There isn’t a marching component to the audition.

Auditions for the UCLA Bruin Marching Band consist of performing a few major scales and a short prepared piece for the wind players.

Drummers perform rudiments in place of scales, and there is no marching portion to the audition.

Color guard auditions for college marching bands are often done independently of the band. Usually, potential members prepare a routine to either assigned music or music of their choice.

Is marching band easier than DCI?

Marching band, especially at the high school level, is nearly always easier than DCI. All DCI groups audition and recruit the best musicians they can find, while high school marching bands are rarely auditioned and invite anyone to join.

Along with the increased funding DCI receives, having experienced players creates more opportunity to craft and perform at an extremely high level.

That said, there are a handful of college bands that work as hard as DC and perform at a comparable level. The Ohio State Marching Band, Texas A&M, and the University of Tennessee Pride of the Southland Band are world-famous college marching bands.