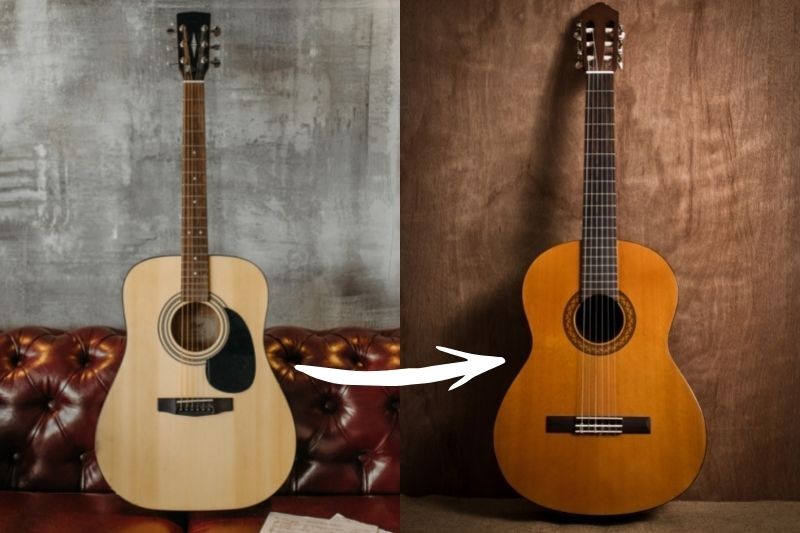 As an acoustic guitar player, you may be seduced by the distinctive and beautiful sound of classical guitar. Many acoustic players switch to or double on classical. How challenging is it to make the switch?

Switching from acoustic to classical guitar involves learning the classical fingerstyle technique, which is complex and requires the use of the thumb and three fingers of the picking hand. Acoustic guitarists also must adjust to the wider string spacing and learn to read standard music notation.

That said, there are certain aspects of the classical guitar that can be easier than the acoustic guitar, such as playability and comfort.

An acoustic guitarist switching to classical guitar would find that the smaller body and similar scale length is comfortable and easier to hold.

While the scale and overall length of the acoustic and classical guitar are similar, the size difference lies in the shape and body size of the guitars. The width and depth of the body has a major impact on the guitar’s playability.

The shape of the body influences the size of the guitar in terms of width and height, while the scale length describes the length. Scale length is the measurement of the nut to the bridge, which is basically the length of the vibrating portion of the open strings.

The most common shape of an acoustic guitar is the dreadnought shape, which has a large, boxy shape to it.  However, there are various body shapes for the acoustic guitar, including the smaller parlour or the very large jumbo

SEE ALSO:   Is Classical Guitar Harder Than Electric? What Do You Think?

Overall, the classical guitar posture offers more stability and playability. Many also find it facilitates better technique and creates less tension on the hands of the player.

To play the classical guitar, one leg is elevated (usually the left) on a footstool and the lower bout of the guitar rests on the opposite leg (usually the right).

As a result, the neck of the guitar is elevated, which allows for easier access to and view of the frets.

This position also encourages the thumb of the fret hand to be behind the neck, which is ideal for the quick movements and extension required in classical music.

Acoustic players, on the other hand, often play with their thumb over the neck, though some consider this a bad habit.

When sitting, the acoustic guitar is played “off the hip”, a posture in which the guitar is placed over the thigh (often the right) and rests parallel to the floor.

In this position, the wrist of the fret hand often gets strained, and hand mobility is more restricted.

Many acoustic guitarists enjoy the low action of the classical guitar and how easy it is to press the strings into the fretboard once they’ve adjusted to the wider string spacing.

While this appears to be a small difference, the increased neck width of the classical guitar results in wider spacing between the strings, which significantly influences how it feels to play.

On a classical guitar, the larger string spacing allows the finger more room to press the string and helps prevent other fingers from unintentionally muting adjacent strings.

This is especially useful because classical guitar music actively involves all four fingers of the fret hand and the music is often quite fast.

Initially, acoustic players may find it difficult to adjust to the larger neck width and string spacing of the classical guitar, making it necessary for the fingers to develop wider extensions.

The action of the strings (the distance between the strings and the fretboard) is also much higher on an acoustic guitar, making it harder to press the strings into the frets.

The lower action of the classical guitar requires much less pressure from the fingers, so it is easier to get a clear sound.

The nylon strings of the classical guitar are softer and gentler on the fingertips of the fret hand, and they are less abrasive of the nails of the picking hand.

Acoustic guitars are made with steel strings, which are strung at a high tension and cut into the fingertips of the fret hand.

Steel strings are also hard on the flesh and nails when fingerpicking, which is why acoustic guitarists tend to play with a flatpick or fingerpicks. Using a pick facilitates a more steady, consistent tone on the strings.

Although the nylon strings are easier on the player’s hands overall, it can be difficult to achieve a consistent tone on them.

Classical players must either maintain well-shaped nails to produce a nice tone, or use the flesh of their fingertips and lose some control over the tone quality.

Challenge of switching between modern and classical music styles

The strict playing methods, fingerings, and challenging classical works of the classical guitar will be a significant challenge to overcome when switching from acoustic guitar.

While the acoustic guitar is primarily used for blues, folk, and pop music, the classical guitar is focused on classical music from the 19th and earlier centuries.

Classical guitar playing is a more specialized study that only uses a fingerstyle approach to playing. This playing style is complex because it demands high levels of technique from both hands.

Also, classical guitar music is often polyphonic, which is music that includes multiple, intricate, musical lines weaved together by a single guitarist. Many classical solo guitar pieces sound like there are multiple guitarists playing.

In contrast, acoustic guitars tend to be used as an accompaniment to singing, strumming chords using a pick.

While learning all the chords and being able to change quickly requires some time and practice, it’s generally a lot less challenging than learning classical fingerstyle playing.

SEE ALSO:   Is drop tuning bad for your guitar?

A majority of classical guitar music is written using standard music notation. In contrast, many acoustic players use tablatures and chord notation.

As a result, reading music can take weeks of study and practice for an acoustic player to become proficient enough to play beginner classical repertoire.

The left hand is basically identical between acoustic and classical. For both, placing the thumb in the middle of the neck allows you to be accurate and mobile with left hand fingerings,

The main difference is in the right hand: with nylon strings, you push down into the string, while on steel strings you pluck the string up away from the body.

Also, classical guitar uses the fingerstyle technique based on the p-i-m-a system (thumb, index, middle, and ring finger), a very formal technique which assigns each finger to specific strings.

Fingerpicking on the acoustic guitar is less formal than classical fingerstyle. Some acoustic fingerpickers use only their thumb and index fingers, or thumb, index, and middle fingers.

The steel-string acoustic is also suitable for strumming styles. Classical guitars are not made for strumming and can be easily scratched when played with a pick.

Acoustic players often use flatpicking, i.e. using a single pick to play individual strings. While it’s possible to flatpick on the classical guitar, playing fingerstyle with all fingers allows for more intricate music that couldn’t be played with a pick.

Is it hard to switch back and forth between acoustic and classical?

Most guitar players are able to switch back and forth between acoustic and classical with relative ease once they learn to adjust to the different string spacing, playing position, and pressure.

When switching to the acoustic, it’s helpful to focus on keeping your fretting hand relaxed to avoid a death grip that will make the transition harder.

If size is a challenge when switching from one to the other, consider scaling down to a fractional guitar. Both acoustic and classical guitars are made in fractional sizes (1/4, 1/2, or 3/4 sizes) which are good options for children and smaller players.

If your goal is to play either acoustic or classical at an expert level, you will probably be better off sticking with one or the other.