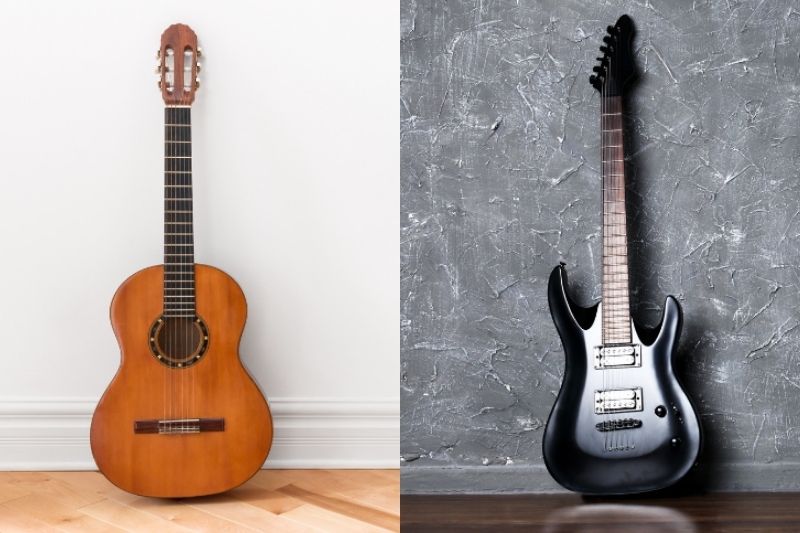 The classical guitar is known for being difficult to learn, but is it actually harder to play than the electric guitar?

The classical guitar is harder to play than the electric guitar because it requires solid skills to play even simple music. Electric guitarists can often get by with basic skills in the early stages. However, electric guitar gets significantly more difficult at the expert level.

Classical style vs electric: which repertoire is harder?

Designed in the mid-19th century, the classical guitar typically focuses on conventional music written by great composers from Spain and Italy.

To play fluently, classical guitarists must learn to read sheet music with proper music notation. Reading standard music notation is a skill in itself that takes years of practice and study to master.

To play fluently, the classical guitarist must at least reach a proficient level of music literacy.

A virtuoso piece such as the famous “Invocacion y danza” by Rodrigo sounds like there is more than one guitar playing, when in fact, it is a single guitarist

In contrast, rock, pop, blues, and heavy metal are common genres for electric guitar, and are often chord-based songs with repeating patterns.

Music for the electric guitar is typically notated using tablature, chord symbols, or a combination of the two. Chord symbols are a capital letter to indicate what chord the guitarist should play.

Tablature is a special notation that indicates exactly what strings and frets to play. Tabs and chords are much simpler to read than standard music notation on the music staff.

Many pop and rock musicians do not read standard music notation, while most classical musicians do.

Classical vs electric guitar: which is more challenging for technique?

Classical technique is steeped in tradition, using a particular hand position and picking the strings with a combination of the flesh of the fingertips and the fingernails.

Keeping fingernails at a specific length and shape is essential to producing nice tone.

Classical guitarists learn their plucking hand technique using the p-i-m-a system, where each letter is assigned to a finger in this order: thumb, index finger, middle finger, and ring finger.

It is a more formal and complex approach compared to the more simple strumming and picking used in most electric guitar playing.

Another thing to consider is that the neck of a classical guitar is wider than the electric guitar, which means the distance from the bottom to the top of the frets is larger, and the distance between the strings is greater.

As a result, more stretch is required of the fret hand when forming chord shapes on a classical guitar.

The electric guitar is easier to pick up quickly because you can start with simple, fun chords and riffs. A pick is often used, which is more straightforward than fingerstyle, and simple strumming patterns can be used to play a variety of pop/rock music.

Electric guitarists are often able to play decently after learning the basics. As you progress into the various styles, sounds, and soloing, the electric guitar does get more challenging.

Overall, though, classical guitar technique is harder to learn.

Classical vs electric guitar: which is harder on the hands?

Classical guitar use nylon strings which is a softer, gentler material for the fingertips to press and pluck. They are less likely to cut up your fingers until you build up callouses.

They are also easier on the fingers because the strings are not wound tightly making it easier to press into the frets.

On the classical guitar, plucking is done using the fingers and nails, while the electric guitar is typically played using a pick both for playing individual strings and for strumming, which is easier on the hand.

SEE ALSO:   Is drop tuning bad for your guitar?

For strumming on the classical guitar, the back of the fingernails is used, which can damage the nail and thin out the nail bed over time.

Electric guitar players often use palm muting which involves pressing the strumming hand into the strings for a damping effect. It is a common technique heard in rock and heavy metal music especially.

Palm muting on metal strings can tear up a player’s hands when used a lot, and many electric guitarists place tape on their right hand to prevent the metal strings from cutting into their hands while palm muting.

Although not as common, some electric guitar players use finger picking. This can also be hard on the player’s fingers over time – which is why many players use attachable fingerpicks.

Classic vs electric: which is harder at an expert level?

Playing the classical guitar engages all of the fingers of both hands. This demands a high amount of coordination between the hands and fingers to achieve the intricate patterns of fingerpicking classical music.

The fret hand must also develop a high level of dexterity and flexibility to play classical guitar, and mastering advanced music will take weeks of practice for even an expert player.

In comparison, an expert electric guitarist can often learn a difficult song within a few hours.

When electric guitarists get into more stylistic playing, the techniques do get more complex with the addition of string bends, hammer-ons, pull-offs, and slides.

These sounds require speed and accuracy and are found in more advanced music and solos.

Soloing on electric guitar is where the most challenge lies. Expert level electric guitar solos are incredibly fast for both hands. For example, “Through the Fire and Flames” by the Dragonforce features insanely fast solo passages that can take years to master.

In terms of style at the expert level, the classical guitar is more limited in comparison to the electric guitar. The electric guitar encompasses a vast range of styles and techniques, which makes it both more versatile and more challenging in this aspect.

If your intent is to master the entire universe of possibilities on electric guitar, it’s nearly impossible. In contrast, expert classical guitarists are sometimes capable of fully mastering their style.

Amplified vs non-amplified guitar: which is easier to play?

Electric guitars are played amplified, which involves another layer of knowledge and learning for the instrument. There is a vast amount of sound possibilities using amp settings, pedals, etc.

SEE ALSO:   Is It Hard To Switch From Acoustic To Classical Guitar?

Amplifiers have unique controls and knobs to set levels for things like the gain, volume, treble, middle, bass, and overdrive. A lot of experimentation is required to learn what amp and settings works best for your preferred style of playing.

In music such as jazz and blues, a clean tone is often desired, while music in the hard rock and metal genres would require higher distortion levels to achieve the style.

Often referred to as “shredding”, rapid guitar solos require similar speed and dexterity to that of some classical guitar music.

The wider fretboard of the classical guitar also prepares the player for moving far distances and widening the stretch of the fingers.

Also, the strength the fingers built while playing the classical guitar will aid in pressing the strings of the electric guitar.

Is it hard to switch from classical guitar to electric?

One major adjustment to make when switching from classical guitar to electric is playing position.

The electric guitar is played in a very different position, either standing or sitting. While sitting, the guitar rests over the top of the right thigh and is more parallel to the ground – a position is referred to as “off the hip”.

When standing, a strap is used with the guitar is still mostly parallel to the ground.

Another significant adaptation a classical guitar player needs to make when switching to electric guitar is to adapt their playing style to the different string spacing and picking style.

Adjusting to the difference in string spacing will take time and redevelopment of muscle memory.

Many great guitarists have made the transition successfully, and it is not hard as long as you spend enough time practicing slowly to allow for the proper adjustments.