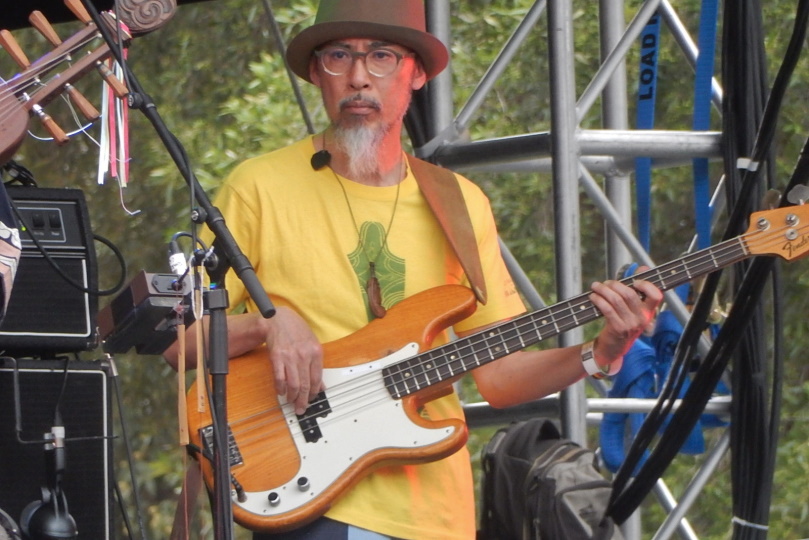 Dubbed-out bass tones are deep, defined, and simple. One reliable path to achieving such a tone is to use a Fender P-bass with flats, roll off the tone knob on the bass, and get rid of the mids and treble on your amp (or go through the DI).

You can also get more thump by using old thuddy flatwound strings, which also eliminates finger noise and clack.

While it can be hard to draw a clean line between dub and reggae, a good start is to listen to the bass of iconic dub bassists from The Skatalites, Yellowman, and Capleton.

Use a bass tone you like as a reference to sculpt your own. There are several ways to achieve deep tones with and without an expensive rig.

What is a dub sound?

The concept of ‘dubs’ started off as a means to create an instrumental track called a “Version”. This was featured as an alternate “B” side of the song. The mixing engineers play as a big role as are the ones who actually play the music’.

So a dub is an instrumental remix double of the original song, that singers use for live performances on sound systems.

These doubles are created by dropping instruments and vocals in and out with generous use of tape echo, spring reverb, and a variety of creatively used modulation effects.

As a rule of thumb, dub bassists focus on the fundamental note and eliminate as much of the high-end and unwarranted harmonics as possible.

The core idea of dub bass tones is to create a fat full-bodied sound that is warm and deep. Yet, it should not sound like a gooey mush that has no focus or detail in the low end. Tone definition is important.

In other words, don’t roll off the highs to a point where you lose the signal completely – unless you are trying to negate the brightness of new strings or hot pickups.

Conversely, you can add subtle compression to tighten up the tone if it is too dull. The bass lines are almost exclusively played using the E and A strings of the bass guitar to keep the bottom-end well-fed and consistent.

The right rig for dub

Many bass players and bands on classic records came from humble backgrounds. These musicians often rely on their creativity to make the best of what they have.

Therefore, dub bass tones are not so much tied to specific rigs as other genres. There is, however, certain gear that is commonly used for creating dub – keep on reading.

You’ll see a fair amount of variation in the brand and model used by well-known dub bass players. A passive bass with flats is a very common choice for a traditional tone. Fender Precision and Jazz bass, as always, rule the roost.

The P-bass has an inherent thump and sounds deep and warm with worn flats. Something so specific is most common among bassists who exclusively play dub reggae.

Besides Fender, EBMM is also a popular choice – though some bassists find it too bright and aggressive.

The Warwick Thumb Bass and Lakland Skyline are other popular choices that can produce a tight tone with a pronounced thump.

On occasion, you will also see the use of the Telecaster bass with an up-close neck pickup.

It isn’t necessary to play through an amp or stack to get a good dub bass tone. Many players prefer to use just the DI on stage or in the studio.

You can get a massive bottom-end with tone definition by blending mic and DI signals while tracking in the studio.

A classic Ampeg SVT 350 (Amazon) or SWR WorkingPro 400 (Amazon) is typically a good place to start. The idea is to go with a good all-tube amp head and pair it with a good cabinet like the Ampeg 410HF. Other options include Carvin BR115 or an Aguilar 215.

If size and weight aren’t an issue, an 18” cabinet is an excellent addition to a Fender or Ampeg half stack. Among 1×15 cabs, Eminence Kappalite EM3015LF speakers are a worthy choice.

You can also explore Reeves Amplification as their 1×15 cabs have a solid reputation for authoritatively handling the low-end. See also: bass cabs for low tuning

The SansAmp Character VT Bass pedal (Amazon) is famous for producing fat and warm tones that work well for dub music. It has an Ampeg-like tonal character that can be used as an ‘always-on’ setting to add depth and color.

Octave pedals can also be helpful if you want to sound more like a synth. The classic Boss OC2 is a good place to start for a thick, vintage tone. The Aguilar Octamizer (Amazon), although more modern sounding, is also worth exploring.

Filter pedals are popular in several avatars in reggae and dub music. Bass players like Bill Laswell have effectively used envelope filters like the DOD FX25 (Amazon) in dub recordings.

Their trick is to set the sensitivity level so low that it colors the tone but the filter never actually opens.

Other bassists swear by the envelope functions of a Low Pass Filter stompbox such as the Iron Ether Xerograph to create massive lows.

As I mentioned earlier, some dub bassists use subtle compression for punch and tightening the tone. Any dedicated bass compressor can get the trick done, but pedals like the Diamond BCP-1 or Tech 21 Bass Compactor (Amazon) are popular choices because of their tone color.

Start with the threshold set very low. Keep the attack time short and the release time long. You don’t want the compression to be very audible.  If you add too much, you will suffer the consistency in volume, which will detract from dynamic playing.

Start with any bass with the neck pickup soloed. Roll off the tone knob on the bass guitar EQ panel and/or dial out the bridge pickup.

As for the EQ setting on the amp, try to find the right balance in the low – this is the meat and potatoes of your playing.

It’s impossible to recommend a generic formula that works for every rig. As a broad recommendation – balance the lows (40 to 60Hz) with the 200-400Hz, cut around 1.5kHz to eliminate finger noise, and roll off everything above 6kHz.

Fine tune the template to find your sweet spot.

Flatwound strings, usually in a heavy gauge, have a gravitas that renders warm and deep dub sounds.

That said, you can attain very convincing sounds with roundwounds as well, especially if they are worn out a bit.

Playing old strings is the norm in dub. Old strings are preferred because they are dead sounding. They have a distinctly thumpy tone that lends well to the genre.

You can try Labella Deep Talkin’ strings, or the Jamerson (50-110). Nylon wound strings such as the Rotosound Trubass 88 are also worth a shot.

Playing style for a dub tone

Most dub bassists prefer to play with their fingers or thumb vs a pick to nail the dub tone and grooves. A pick can produce harmonics, which is not what we are gunning for.

See also: Is Playing Bass Guitar With Your Thumb OK?

If you insist on playing with a pick, tuck some foam under by the strings right by the bridge to get a quick decay and more thump.

Like reggae, dub bass sounds best when you pluck the notes close to the neck. The exact position will vary among bass guitars, but you can find a sweet spot between the neck pup and the neck heel.

You can partially or fully palm mute the strings with your right hand for a more dub reggae sound.

You can get some hard-hitting dub sounds with a punchy synth bass groove and big drum sounds. Synths like Roland Juno 106, Yamaha Dx100, and Jupiter are inherently capable of deep and gritty dub tones.

On the downside, synth tones can be too rich and laden with overtones. Dub basslines will sound better using a monophonic bass synth with a Low Pass Filter.

Pair a good MIDI controller with Waves MaxxBass, Waves RBass, or Waves CLA Bass for the added bonus of some tasty pitch-bending using the modulation wheel.

You can experiment with combinations until you find a tone with rich, subby lows. Some mild saturation can also help to make the above plugins sound more analog.  Don’t forget to keep the release time long.

Bass is a defining element in dub music. Yet, this reggae subgenre is fluid – it has multiple styles within it. The one thing they have in common is that dub bass is BIG.

Like all things big, dub needs space. Dub tracks try to avoid crowding the low end with other effects or instruments. The latter come with a HPF set in a way that removes most of the low end.

I’ll wrap up with a few listening recommendations for great dub bass tone: