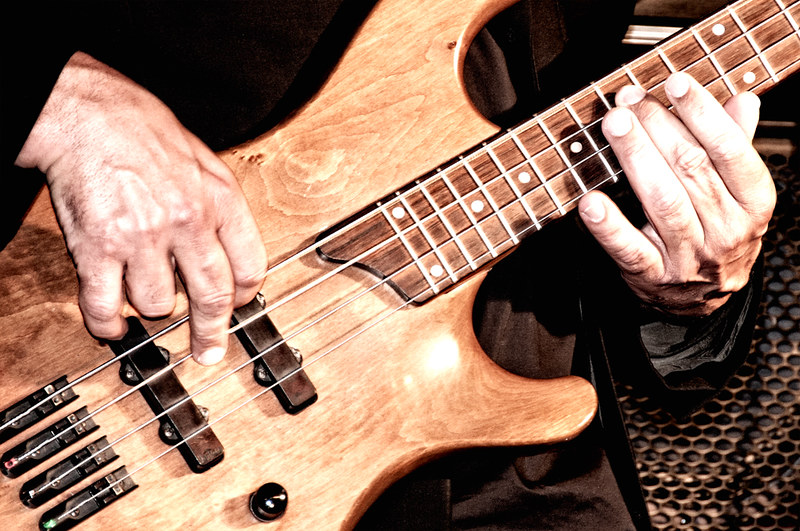 When plucking the bass guitar, some bassists use a really light touch, barely grazing the strings, while others pluck really hard with their fingers behaving like hooks. A common question bass players ask is, should I pluck light (and turn up the amp volume) or should I pluck harder?

There are pros and cons of both light and hard plucking, and each bass player has his/her own preference. Some feel bass is a percussive instrument meant to play with force. However, most bassists, however hard they tend to play, agree that playing with a soft touch is an important skills to acquire.

Playing with a soft touch can help you improve accuracy, speed, and timing, and is the best way to gain dynamic control. Playing fast quietly means playing at medium level on the bass and turning up the amp slightly to save energy. It’s a skill that can be difficult at first and takes time to master.

That being said, a good bass player should be comfortable plucking both soft and hard depending on the tone s/he’s trying to get. While it’s generally not necessary to pluck hard, being able to dig in is important. Tone, rather than volume, is what determines how hard you need to play.

Ideally, you should pluck the strings medium light most of the time, and be able to have a more subtle touch or conversely to pluck harder when the song calls for it, e.g. for a breakdown or crescendo. The ability to mix and match between light and heavy attacks is an important skill.

Pros and cons of plucking hard or soft

In general, playing light lets you save motion and strength. You thrive to achieve the smoothest tone with as little effort as possible, which results in improved speed, accuracy, and stamina. The lighter the pluck, the faster the finger becomes ready for the next note.

Softer plucking results in reduced string vibration, so the strings hit the frets less hard. As a result, less strength is needed in the left hand to hold down the strings against the fretboard, making for more comfortable playing.

Although it’s important for a bassist to develop the hand strength to pluck hard when needed, constantly playing hard can be very limiting and eventually may strain your finger joints and tendons.

A light touch typically results in better low-end clarity and depth of the tone. It also allows you to play harmonics at a similar level as fretted notes.

Bass players generally agree that one shouldn’t pluck hard just to get volume. You should generally learn to play with a controlled attack and use your amp for volume. A gentle attack is also best-suited for most types of music.

Tone, on the other hand, is largely defined by your pluck. Harder plucking gives you more attack (e.g. Geddy Lee) while lighter plucking results in a more mellow tone with more bass and sustain.

Playing harder changes the tone color, reducing the bottom-end and “meatiness” of the tone, particularly in the initial attack. Hard plucking makes the strings vibrate hard, resulting in a strong attack but weaker note sustain. Light plucking, in contrast, reduces the gap between attack and sustain, which results in a fatter sound.

Besides your touch, gear also plays a key role in your tone and volume. Turning the amp up will raise the volume. Using a compressor with slower attack will add attack to your tone.

A bigger sound can also be achieved by playing light, by plucking at the right angle and at the right place. Plucking perpendicular to the strings rather, than parallel to them, for example, produces a harder attack.

As mentioned, dynamic range is an important aspect to consider when deciding how hard to pluck your bass strings. A “pianissimo” feel can be achieved by merely brushing the stings with your fingertips while “fortissimo” is obtained through hard whole-finger pull and release.

Starting a song with a light touch allows you to build up dynamics over the course of the song by plucking harder when needed. A light touch will give you headroom and add subtlety to your style, making accents and volume variations a lot more noticeable.

Many songs have varying dynamics, requiring you to adjust from one part to another. Plucking with varying force gives dynamic range. For example, you can alternate between a forceful Marcus Miller-type fingerstyle feel, a lighter touch flying over the fretboard for a mellower tone, and a thumb-based fat sound.

How hard you need to pluck your bass strings also depends on the type of music and song you’re playing.

Playing hard is generally considered important for fingerstyle rock for a punchier tone that goes well with rock riffs. 8th-note rock songs, fat, classic rock, stoner rock with distorted sound typically call for the kind of grit you get from heavy playing on the bass.

On the other hand, for jazz or Motown-style R&B, alternating between light and heavier touch is essential to adapt to each song’s particular groove. For most hip-hop songs, very light bass plucking works best even though a solid bass sound is expected.​​​​​​​

For slap, a light touch results in quick and percussive notes. Technique, not force, is what creates punch and snap.

Even within a given genre, the type of touch needed on the bass also varies based on the song. Pink Floyd’s “Time” song, for example, is best played with a rather light touch as a strong attack is not really required. In contrast, Rush’s “Freewill” sounds best with a heavier attack where the strings loudly hit the bass fretboard.

So again, a good bass player needs to be able to alternate between light and hard touch – as well as between fingers, thumb, and pick.

There are several common techniques for improve your light touch on the bass. One of them is to play directly over the pickup, which prevents your fingers from digging too deep in to the strings.

Practicing playing wit the bass and amp volume higher than regular is also a great way to learn to lighten your touch and clean up your technique. You can also lower your action for more fretboard snap.

How hard you play is also influenced by the gear you play on. If you bass has high action, getting a good slap/pop sound requires more force for hitting the strings against the frets. A lower action means you can get that spanky pop much easier, barely touching the strings.

Some bass players get into the habit of playing really hard due to a badly setup bass that forces them to pluck and fret harder to get the desired sound (often breaking strings in the process).

Setting you bass’s neck relief and action a bit below normal not only makes your bass much more playable with a lighter touch, it also lets you get a hard play sound from a medium touch. You can then mix soft and hard plucking without too much difference in volume, even without a compressor.

A low action bass will also give you that nice special sound from plucking hard over the middle pickup.

Compressors, chorus, and other pedal effects also influence how soft or hard you need to play your bass. However, most of the time your touch remains the most important element of your tone.

Some famous bassists like Geddy Lee, Billy Sheahan, or Jack Bruce get their well-known bass tone by using a hard touch. Others like Victor Wooten, Gary Willis, or Jeff Berlin are known for their really light touch.