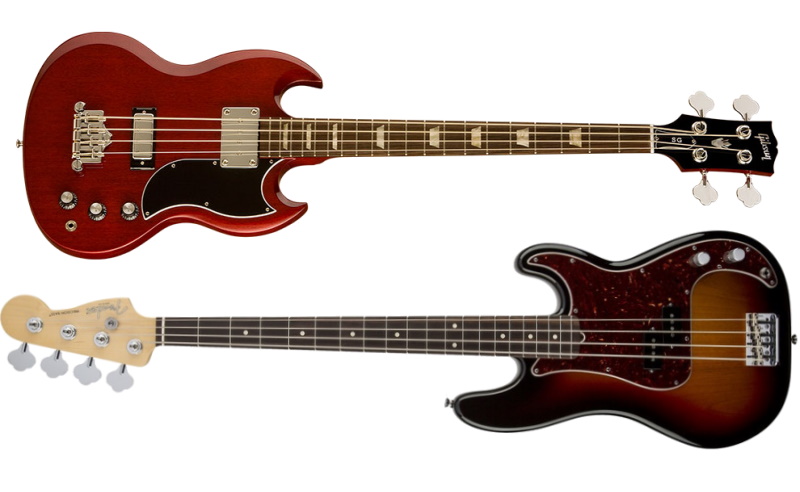 The Fender Precision bass is a timeless classic with a tone that caters to a universal taste and bass that is an out-and-out workhorse.

In contrast, the Gibson SG Standard is an atypical sounding short-scale bass that can be called an evolution of the Gibson EB bass guitars from the 60s.

The Fender P-bass is more musical, practical and familiar, but it is also more limited, predictable and a lot more common.

The SG Standard is unique, quirky and eye-catching but it’s muddy & peculiar sounding. It is worthy of being a part of a collection of bass guitars but it cannot be the mainstay of your rig if you are a session artist.

The SG tone is an acquired taste that shines in certain genres but can’t be forced upon every musical context. Between the two, the P-Bass is the clear winner if you are a one-bass bassist.

That being said, the SG Bass is one of Gibson’s best bass offerings in a long time. If you want to approach it on its own terms, the SG sound can really complement a power trio or a rock outfit. It looks unique, sounds distinct and it is more versatile than a P-bass.

The SG has the huge Gibson tone with the fat bottom end that sounds like a throwback to artists from the 60s and 70s like Felix Pappilardi (Mountain), Dennis Dunaway (Alice Cooper) and Jack Bruce (Cream).

In this post, we compare the Fender American Professional P-Bass (previously known as the American Standard) to the Gibson SG Standard Bass (2019) to see how the two models hold up in a head to head battle.

Here’s a side-by-side comparison of the key features of the P-Bass and the SG Standard:

As you can see in the table, Gibson is a lighter bass with a narrower nut-width and shorter scale length, but it has a larger fingerboard radius. The reach and playability of the SG are better if you have smaller hands.

Regardless of what you compare it to, the P-bass is just one step down from a tree-trunk – not a small-person friendly bass. It is made for big dudes.

Don’t confuse a short-scale bass with a piccolo bass. The 30” scale length doesn’t make the SG sound sharp or strident. The smaller the scale length, the deeper the bass will sound. That is why Kala-U Bass (Ukulele sized bass) almost sounds like an upright, remember?

So playing modern funk or slap bass is out of the question. The short scale length is good for fast runs or rock and metal riffs but they also contribute to the muddier sound and weak string tension.

Speaking of which, the other important factor that affects playability is the string tension. It is hard to fault the P-bass in this regard – anything that can handle the low tension of two-year-old Thomastik Jazz flats has passed the ultimate test in my book.

The SG is a totally different story. The flats feel too floppy and the roundwounds barely get the job done. The short scale length means you have lesser string options to begin with and you never quite get to dig in hard while playing.

As far as looks go, since P-bass set the ball rolling in the 50s, every bass shape is a play on this archetype. It looks classy but there is nothing unique about it. The SG is exclusive and quirky – it has a wow factor because it is an uncommon body shape.

They both have a very different aesthetic appeal and I believe that is an apple v/s oranges comparison. The only noteworthy point is that the P-bass is available in 5 finish options compared to the two options for the SG Standard.

The lack of tone definition was a big problem with the Gibson EB-styled bass guitars from the 60s. But back then the competition was negligible, and Gibson was a big name.

Still, the pickups were commonly called ‘mudbuckers’ in bass circles. They were clunky, fat and full of mud. Only sparkling new strings could save them – momentarily.

SEE ALSO:   Are Fender Basses Really Worth It? The Raw Truth

Gibson seems to have acknowledged this when they launched the SG Standard. Unlike the old honky EBs, the SG Standard has a more palatable tone with cleaner edges.

The 30” scale and two humbuckers retain that iconic thick low end but they have also been modified to a contemporary framework. The pickups on the SG are the same as the rock legend Gibson Thunderbird bass. They offer noteworthy sustain and can get quite gnarly with a pick.

There is still some hollowness in the neck pickup but much of it can be dialed out with EQ. Within the huge woody spectrum of tone, you can find some usable and unique tones that make the SG Standard a worthy choice.

In a nutshell, the SG has less mid-growl with a more rounded bottom or a subby bass sound. It is huge but hollow and it will take some work to get it to sit in the mix.

On the plus side, the SG has two distinct humbuckers, one in the neck position and the other in the bridge position. They can be combined to produce sounds that will suit the needs of modern bass players.

The ‘boomy sound’ is in part due to the position of the neck pickup. Typically, you will need to EQ it out by rolling off the lows and boosting some low-mids.

The pots on the Gibson SG have no noticeable sweep. Of course, you can easily swap them with 1MEG pots to get a much wider audio sweep from the tone knob.

The Fender Precision bass sound is the gold standard, an iconic tone that is heard on so many great records. Recording engineers and sound guys love it, and unless you are playing in an ultra-modern trio, your band mates are going to love it.

The P-Bass is simple – one split single-coil pickup with one volume knob + one tone knob. The magic is in the placement of that pickup which gives it an unrivaled low-mid presence and well-rounded character – right in the center at a sweet spot that gives that oomph.

The P-Bass punchy, gritty and sits well in any mix. It shines in the mids and has more focused lows with rounded-out highs compared to the clunk of the SG.

P-Bass has a long and rich history, which means the mixing engineers (studio & stage) know exactly what to do with it. There is a ‘Leo Fender Magic Moment’ that happened when the P-Bass was created.

The Precision bass is very good at what it does and sits great in the mix. In some ways, you could call it a one-trick pony. But that one trick is a classic that works in a lot of scenarios.

SEE ALSO:   Yamaha Bass Guitars: Are They Any Good? Yes, and Here's Why

Head to head the SG will sound more versatile than a P-bass when strung with roundwounds. Because Gibson SG has two pickups + tone knob + amp EQ, you have a larger tonal variety to dial in compared to the Precision bass’ single split-coil. The SG, however, won’t sound like a P-Bass.

When it comes to flatwound strings, the Fender Precision rules over the SG by far. The P-bass +  flats combination is a match made in heaven. It sounds iconic, creamy, warm and sets the benchmark for a highly sought after sound.

The SG, in contrast, sounds rather drab and thuddy with no harmonics, especially as the flatwounds age. The flats + short scale length just makes it too floppy and indistinct in the mix.

It takes you back to the EB-2D that would just cough mud through the speakers when the tone knob was at 12 o’ clock and the neck pup was dialed in – like playing a cigar box strung with noodles.

Gibson and Fender are big-name American brands with a high level of QA. But quality is one thing and consistency is another. Between the two, Fender has relatively better quality and consistency.

The quality control on Gibson products varies from item to item and some of the basses ship with questionable quality for the price. It isn’t anything that can’t be remedied by a good setup, but at this price-point a slip-up may not seem acceptable.

Fender bass guitars tend to be more consistent, especially the P-bass. This could be because the P-bass is quite simple and has been around for roughly 70 years. That said, some Fender models (product lines) and build years have had their share of erratic QA.

Gibson SG is shorter and smaller. It is considerably lighter and more compact compared to the chunky P-bass. Thanks to the lighter mahogany build, 30” scale length and diminutive guitar-sized body, you can cart the SG around with ease.

The SG feels easy on the shoulders while standing and a little stroppy while sitting until you get used to the eccentric shape. Like all Gibson bass guitars, the SG Standard is headstock heavy and has a strap button at the heel of the neck. This causes incessant neck dives until you get some reliable strap locks.

The P-bass, being more conventional, sits well on the lap but feels heavier on the shoulder. The P-bass neck is notoriously chunky but very sturdy and robust. It is not beginner friendly, nor is it a fast-playing neck.

Fender uses a glossy polyurethane body finish with satin finish on the back of the neck and gloss finish on the front. The Gibsons are famous for the trademark heavy nitrocellulose lacquer finish.

Both are fine but the nitro finish is more delicate and needs to be taken into account when you buy a guitar stand, which needs to be nitrocellulose-safe.