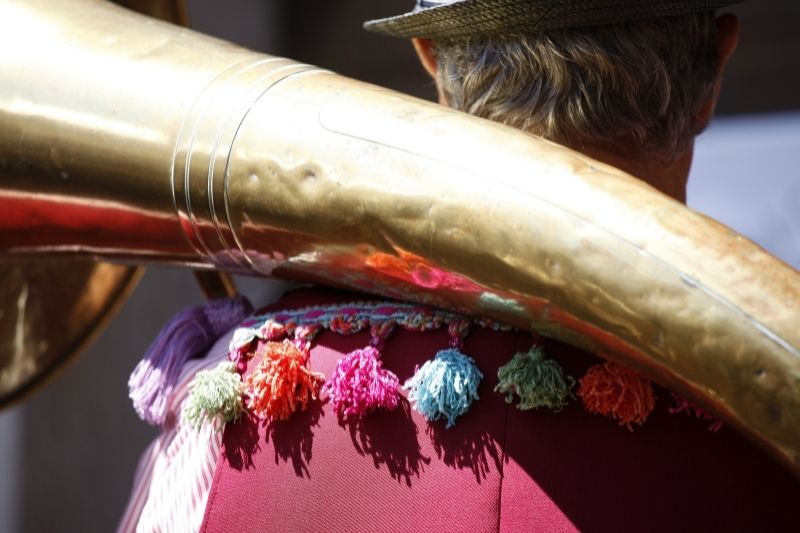 Brass instruments are susceptible to getting knocked around sometimes, especially the larger ones like the tuba. Even if you’re extra careful, it is possible for your instrument to get hit against a music stand, door frame, or another instrument while transporting or playing it.

A dent or two is bound to occur, but how can we tell if a dent will affect the sound, or if it’s just a minor, cosmetic ding?

Does a dent affect a horn’s sound?

Brass instruments are designed to bounce sound waves around in a specific shape and at a specific rate to create the desired sound.

Considering how sound travels through the tubing of an instrument, a dent can prohibit sound from bouncing properly by disrupting its pattern.

The degree to which the dent interrupts the sound wave is mostly dependent on its location on the instrument. You may experience issues with tone, intonation, and may have trouble producing the proper pitch if the dent is in a bad spot.

A general rule of thumb that has guided many players over the years is that the closer a dent is to the mouthpiece, the more detrimental it is to the sound of the instrument.

This is because the dent is closer to where the sound starts, which causes immediate disruption.

Dents close to the mouthpiece or lead pipe of the horn will likely make it difficult to play with nice tone and consistent intonation. They can also make a brass instrument more difficult to “slot”, which is the production of the correct note.

If the dent is located closer to the end of the instrument, such as the bell flare on the horn, it will not affect the sound of the horn much, if at all.

Aside from dents on the body of the instrument, there are specific dents that will render your horn unplayable all together.

Dents in a valve casing or a dented mouthpiece are the more obvious ones that will certainly cause issues with the sound and playability of your horn.

Although it is technically a woodwind instrument, the saxophone is made from brass, so it experiences dents in a similar way to the brass family of instruments.

The same general wisdom that dents closer to the mouthpiece are more troublesome applies to saxophone too.

Dents located on the neck or upper body of the saxophone will likely affect the sound. The neck has a very small diameter that is easily influenced by even small dings to the surface.

Lower body and bell dents are usually harmless blemishes, but they can also be an issue depending on their size and location. Any dent that causes any air leakage will affect the sound of a saxophone.

Small dents aren’t usually an issue, but if they warp the tone holes at all, the key will not seal. The tone holes are the openings where the keys lift on the saxophone.

When a key doesn’t seal when pressed down, air will leak and cause playability and sound issues for the saxophone.

A dent in the bottom of the saxophone, called the lower bow, can make lower notes either way out of tune or unplayable entirely. Unfortunately, these types of dents are common on the saxophone and occur often when the instrument is dropped.

The size and location of the dent also impact how much the dent will affect the sound of a trumpet. Like the other instruments, the closer to the mouthpiece the dent is, the more it affects the sound.

A very small ping on the body of the trumpet will usually not affect the sound. Larger dents will more likely cause issues, but the location of the dent is the biggest factor.

On a trumpet like on any brass instrument, a dent to the valve casing must be repaired. These dents will prohibit the valve from moving up and down and can damage the valve or keep it from moving all together.

Aside from the valve casing, the lead pipe of the trumpet is the worst place to get a dent, and a decent sized one will make it difficult to play the trumpet.

A large dent or several small dents will cause the tubing of the trumpet to become smaller.

This may increase the resistance and back-pressure when playing, which is already high on an instrument like the trumpet.

This change in air flow will likely affect how well the instrument plays. It is not ideal to be fighting against the instrument to achieve the correct notes and good sound.

Basically, the parts of the tuba with smaller tubing, such as the tuning slides, will be more affected by dents of any size. Any dent that significantly decreases the size of the tubing will be an issue to the sound, intonation, or air flow of the instrument.

A special component of the trombone is the main slide, which consists of the inner and outer slides. Trombone dents can be a significant problem if located anywhere on either slide.

A dent on the inner or outer slide will prohibit the slide from being able to move freely.

Untreated dents on either slide will warp the slide and eventually make the trombone unplayable.

Dents in the main slide unfortunately happen commonly with trombones because the slide is long and on the move.

SEE ALSO:   Should I Play Trumpet Or Trombone? Help Me Choose

It is common for the bottom of the outer slide to get hit against the floor or a music stand when extended during playing.

Dents on an instrument as large as the tuba are nearly inevitable. It is a risk associated with hauling a large hunk or brass around, even within one room.

An overly large dent will most likely cause issues in playability and sound, but the smaller ones can go either way.

Dents on the main bow of the instrument will usually have to be rather large or in a particular spot to affect the sound of the tuba.

Can you fix a dented trumpet? What’s the cost?

A typical dent removal is not very expensive and commonly costs around $50. In some severe cases, it may be more cost effective to replace parts of the instrument, or even the entire instrument, rather than paying for repair.

The severity to which the trumpet is dented will influence how well it can be fixed. The skills and knowledge of the repair technician also play a part.

Sharp, creased dents in which the brass is folded over onto itself are incredibly difficult to remove, even by skilled technicians.

In general, a good repair technician will be able to remove any average dent a trumpet encounters. An average dent would be those encountered by stepping on the instrument, dropping it, or dinging it against another surface such as a music stand.

Cost plays a role when deciding if you should have a dent removed from your trumpet. A tiny dent that isn’t causing any playability or sound issues may not need to be repaired, while those affecting sound will need fixing.

Oftentimes, student instruments with cosmetic blemishes are left alone. The investment in dent removal may not be worth it if the instrument will continue to accumulate dings in the future from a young or inexperienced player.

If the trumpet has a lacquer finish, de-denting will affect the finish of the horn in that spot. It will be more expensive if you wish to re-lacquer the instrument – although some like the character it adds when the lacquer is partially removed.