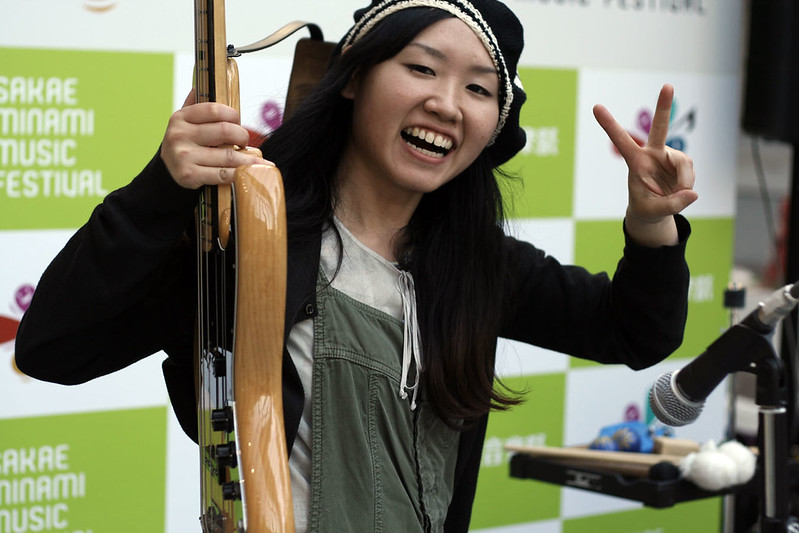 In many bands, the singer and the lead guitarist tend to get the most attention from the public. Bass players, typically don’t get nearly as much spotlight, except for stars like Flea or Les Claypool.

What’s more, bassists often complain they are taken for granted, even looked down upon by their band mates. Bassists often get offended by statements from other musicians that bass is a lot easier than guitar, that bassists are failed guitarists, or that a normal person would never choose to play bass.

Some guitarists show great disrespect towards the bass player and will do things such as turning down the bass amp without asking so they can hear the guitar louder. Such repeated remarks and acts bring down bass players and lower their self-esteem.

Bass players are often quiet and humble persons who don’t seeking praise and glamour. They’re often happy to stay in the background to anchor down the music and lay down the groove along with the drummer, playing a key role is pulling the music together.

That said, every musician needs to see some level of respect and approval from the public and/or fellow musicians in order to have an enjoyable experience when playing.

But while some bassists do feel they get less attention and recognition compared to other musicians in the band, others don’t feel that way and are happy with the way the public and their band mates treat them.

SEE ALSO:   How to Get a Punchy Bass Tone: The Complete Guide

Why bass players often get less attention or respect

In many bands, the bass player tends to go unnoticed with the audience. Most bands have a strong mix of mid-to-high instruments and vocals which get all the attention from the listener’s ear at the expense of the bass. The bass gets a lot less time in the spotlight.

The bass is also a support instrument vs a lead one – it rarely has a melody that listeners can remember or solos that can amaze non-musicians. The bass plays a discrete, essential and atmospheric role, setting the groove and tone of the song through fundamental and seemingly unexciting patterns for the public.

While many bands have a player with an attitude and show-like behavior who get the spotlight, it’s rarely the bass player. In contrast to singers, guitar players, and even drummers, bass players seldom have groupies – something they can view as a lack of appreciation.

While bass players may not be looked down upon as some say, they generally don’t stand out as much and don’t get as much admiration from non-musicians as do the guitarist or singer. Most people don’t really notice the bassist.

Some bassists feel they don’t get enough respect from other band musicians either. Sometimes, the issue stems from the bass player him/herself lacking confidence – some are even ashamed of telling people they play bass!

Also, compared to other instruments, the bass is relatively easy to get started with for playing simple bass lines in a band. As a result, bassists don’t get as much respect as players of other instruments with higher barrier to entry.

SEE ALSO:   Band Without A Bass Player: Is That Feasible?

Some bassists primarily play root notes and fifths in their bass lines, which can also leads others to make fun of them. In some cases, however, the music vibe calls for such minimal approach – think Judas Priest or AC/DC – vs more technical bass lines.

Bassists often have to cope with bad jokes such as “you studied for so long just to play roots and fifths” – ignoring the point that all the challenge is in delivering these notes at the right time. Many people don’t understand these subtleties and don’t see the “feel” some bassists have.

As mentioned earlier, bass players are often viewed as guitarists who were not good enough. Most of the time, however, this comes from inexperienced musicians. Good musicians know that a solid bassist is essential to getting a good sound.

Bass players often say that, while mediocre bassists are routinely looked down upon and disrespected, good ones are simply ignored!

Why some bassists DO get respect

In good bands with experienced musicians, a good bassist is generally greatly appreciated. Real musicians understand being a good bass player requires a good feel for the music, even for playing non-technical bass lines.

The bass is a foundational instrument and is always unique in a band, while there may be several guitars, keyboards, or singers.

Good bass players are particularly cherished and respected in jazz since another instrument players can’t easily replace them. In Jazz, bass solos get even more spotlight than other instruments. Charles Mingus, Dave Holland, and Victor Wooten are great examples of influential jazz bassists and band leaders.

In many bands, the bass player also handles the arrangements and musical leadership (key, tempo, conducting, choice of songs, choice of gigs, etc), which also gives them a lot of clout among fellow musicians.

Newer bassists are often encouraged by other musicians to participate in jam sessions since bass players are often a scarce resource.

SEE ALSO:   Bass Guitar & Drums Relationship: Why It's So Crucial

When it comes to the public, it’s quite common to see people who have a natural connection to the bass and appreciate a good bass player. These people will readily walk up to the bassist and chat with him/her during breaks.

So… why do bassists often feel they get no respect ?

Many people agree that jokes about the bassist are merely a meme, a running gag. While bassists don’t get as much attention as lead guitarists and vocalists, it’s really no different than drummers and keyboard players.

The meme may have started due to some bass players being primarily guitarists and playing basic lines to fill in for a real bassist.

Bass players often like to have a support role and are self-aware people who attract more jokes than the more self-asserted guitarists. But the level of respect a bassist actually gets depends more on their own personality than the instrument they play.

If anything, bassists are quite valuable and in short supply. Good bassists get as much respect as other instruments, including from some non-musician listeners who do listen to the bass.

That said, there is some truth to the fact than the bassist is often ignored unless he plays badly – which typically will make the whole band sound bad to everyone.

Buying huge wattage amps/cabs and other expensive gear, or over-playing your part to justify your presence won’t earn you more respect as a bassist.

The bass players who get the most respect are those who practice a lot, are knowledgeable in music theory and how to apply it, always have a well-tuned rig, are punctual and professional, work well with the other instruments in the band, focus on playing just the right amount of notes at the right time, filling space or leaving room when needed.