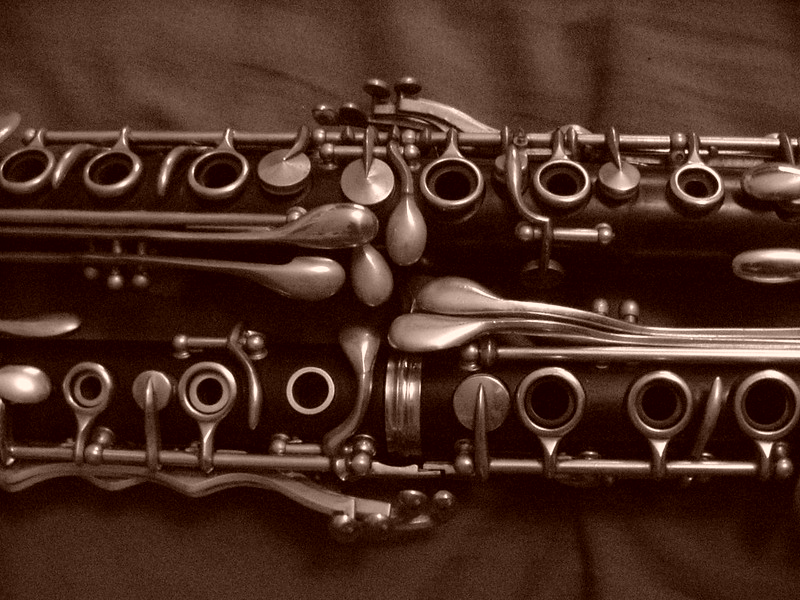 The Eb and Bb clarinets are part of the same woodwind family, with many similarities.  They look virtually the same and use the same fingerings. But when you look more closely, you can see that there are many important differences, too.

The Eb clarinet is smaller, playing at a higher pitch than the Bb. They have a different timbre from one another, with the Eb tending to sound more shrill. They’re also used differently in ensembles. The Eb is more difficult to play in tune, and usually costs more than a comparable Bb.

The Bb clarinet is the standard instrument to play, and is recommended as the instrument to begin learning on. When comparing the Bb and Eb further, additional differences become apparent.

Main differences between the Eb and Bb clarinet

The Bb soprano or harmony clarinet is the bigger of the two, measuring 26 inches long.  As the smaller member of the clarinet family, the Eb sopranino or piccolo clarinet is 19 inches long. The bore and tone holes of the Eb instrument are also smaller.

Due to this difference in size, the two instruments play at different pitches. When the clarinet pitched in Eb plays a written C, the sound produced is an Eb, a minor third above the written note.

When a Bb clarinet plays a written C, the sound is a Bb, a major second below the written note. In order to play with instruments pitched in C (concert pitch), the music for both clarinets is transposed.

The higher-pitched sound of the Eb is meant to penetrate through an ensemble, so it can be more difficult to blend with other instruments when needed.

Both instruments require a relatively firm embouchure (how the mouth is formed around the mouthpiece) in order to control the single reed vibrating against the mouthpiece.

Because the mouthpiece and reed for the Eb clarinet are smaller, the embouchure is smaller and firmer.

The timbre or tone of the two instruments is somewhat different. They both sound like a clarinet, but the length of the instrument, size of the bore, tone holes and the mouthpiece help to define the characteristic timbre of each instrument.

SEE ALSO:   Can You Use a Clarinet Reed on a Sax (and vice versa)?

The tone of the Bb clarinet is considered fuller and warmer, while the Eb clarinet can tend to sound strident. It’s more difficult on an Eb to blend with an ensemble.

The Bb is considered to have a more pleasing tone, but a musician can learn to play the Eb beautifully. Eb clarinet is also able to be heard even within a very loud ensemble. The instruments often play different roles in the music, so both are irreplaceable.

Cost is an important consideration when comparing the two instruments. Prices vary depending on the quality of the clarinet.

For example, on the Eb, if a certain note sounds sharp, the player relaxes the embouchure slightly, or closes another tone hole to bring the pitch a bit lower. However, there is a variety of fingerings to choose from for notes in the altissimo register, allowing the player to have less difficulty playing high notes in tune.

Main uses of the Bb and Eb clarinets

How is the Bb clarinet used?

More common is the Bb clarinet, used by numerous players in orchestras, bands, clarinet choirs and often in jazz. A traditional orchestra features at least two Bb clarinets, each playing their own part.

Classical period orchestras generally had two clarinets.  Orchestras in the Romantic period might include four clarinet parts, including Eb and bass clarinets. Symphonic orchestras of today can have any number of separate parts.

A typical concert band usually has three different Bb clarinet parts, with two to three players per part. Sometimes there is a solo Bb part as well. The Bb clarinets are often asked to play the role of the string section in an orchestra, providing a foundational part of the overall sound of the group.

The Bb clarinet is also a standard instrument in many jazz ensembles, playing an especially important role in Dixieland style and music of the Big Band era. Jazz saxophone players often double on Bb clarinet, providing tone color variety to the group.

How is the Eb clarinet used?

The Eb clarinet is considered an auxiliary instrument which musicians begin to play after they’ve had some experience playing the Bb clarinet.

Orchestras, marching bands, concert bands and clarinet choirs generally have only one Eb clarinet in their ensembles, if any, since one instrument is enough is able to be heard within the musical group.

The role of the Eb clarinet is often to play high melodies that would be much more difficult to play using a Bb clarinet.

19th and 20th century composers such as Hector Berlioz, Maurice Ravel, Richard Strauss, Igor Stravinsky, Dmitri Shostakovich and Gustav Mahler included the Eb clarinet in many of their orchestral works, often featuring it as a solo instrument.

Band compositions include those by Gustav Holst, Paul Hindemith and Gordon Jacob. There are some solo works for Eb and accompaniment by composers such as Antonio Vivaldi, Johann Molter and Henri Rabaud.

As mentioned above, the Eb clarinet is smaller than the Bb, about ⅔ the size. It was designed to provide a high soprano voice to the clarinet family.

Other woodwind instruments are conical, but the clarinet is polycylindrical, giving it distinctive tone and pitch range.

The bore of the instrument is a very important facet to the clarinet’s sound and intonation.  It refers to the measurements of the hole which goes from the opening of the mouthpiece to the end of the bell.

The bore size of the Eb is generally around .532 inches, while the Bb is about .574 inches. Because of this, the Eb clarinet provides more air resistance than the Bb clarinet.

The keys and tone holes of the Eb clarinet are also smaller, and placed somewhat closer together.  A player who is accustomed to a Bb clarinet needs to adjust their hand position slightly to accommodate the size of the Eb, but this makes it easier to close the holes completely on the Eb clarinet.

How to know if a clarinet is Bb or Eb?

As mentioned, the Eb clarinet is noticeably smaller, 19″ long vs 26″ for the Bb. Another way to identify a clarinet is to play it and identify the pitch that is sounding. Compare notes with a concert pitch instrument, such as piano, flute or trumpet.

SEE ALSO:   Clarinet or saxophone: which is easier?

Which one is better for Jazz?

As discussed above, many jazz saxophonists double on Bb clarinet, bringing the different timbre into the mix. There are enough similarities in tone production and fingerings that make this a natural choice.

Can you use one in place of the other?

You might ask whether it’s possible to substitute one for the other. A Bb clarinet player, for example, might want to play an Eb part when the smaller clarinet isn’t available.

It’s possible to do this simply by transposing the music up a perfect fourth. So a piece of music for Eb clarinet that’s written in C major would need to be transposed up to F major.

Although it’s less commonly done, Bb clarinet music can be transposed for Eb by moving the music down a perfect fourth.

While it’s possible to play an Eb clarinet part on a Bb clarinet, it isn’t exactly the same. As previously mentioned, the two instruments have different timbres. The tone color of the Eb is brighter and more piercing, while that of the Bb is considered to be fuller and warmer.

Also, if the music is written in the altissimo register, the notes will be even higher on the Bb clarinet, making the music much more challenging to play.

As members of the same woodwind family, the Eb and Bb clarinets have many aspects in common. While they look alike but the Eb clarinet is smaller, and the pitch is different.

Musicians generally start learning on the Bb clarinet, then begin playing the Eb clarinet after they have progressed. Both clarinet types serve different purposes and are both vital in the music world.