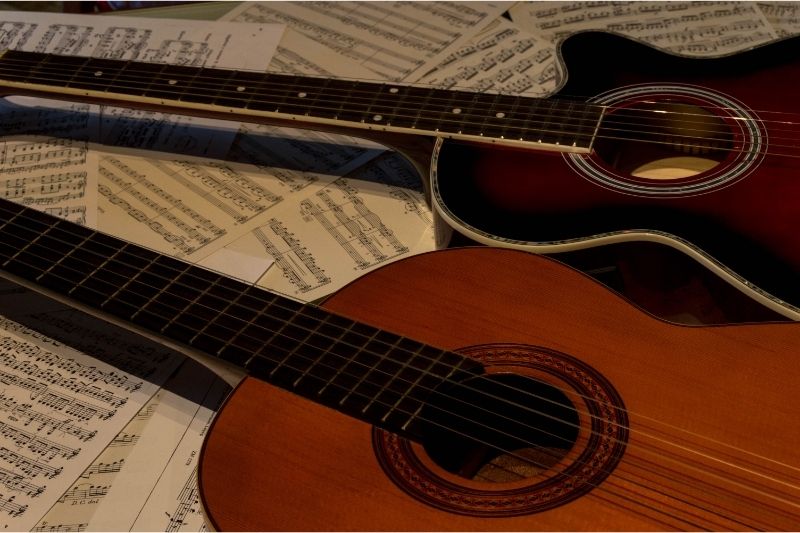 The classical guitar is designed for playing fingerstyle. Nylon strings are friendlier to the fingers and produce a well-balanced sound. Fingerstyle is used on acoustic guitar for certain sounds and styles but is generally harder on the hands.

Some musicians claim a guitar is a guitar, while others prefer one or the other for fingerstyle. Let’s look at some of the reasons:

Difference between classical and fingerstyle

The terms “classical” and “fingerstyle” are sometimes used to refer to different things.

The classical guitar has a wider fretboard, a generally smaller body, and nylon strings vs steel strings for the acoustic.

Classical music should be played on nylon strings exclusively and traditionally uses the fingers to produce sound, without a pick.

That said, the technique of fingerstyle can also be used on acoustic guitars for genres outside of classical music.

The term “fingerstyle” is defined as playing the strings with the fingers instead of a pick. Thus, classical guitar and music are technically played using a fingerstyle technique.

“Fingerstyle” has also come to refer to a musical style, however – in the same way as “flatpicking” now refers to a style. As a musical style, fingerstyle is generally played on a steel string acoustic guitar and rooted in folk, pop, and modern music.

Chord-based songs that use the fingerstyle technique can be played on both classical and acoustic guitars, but stylistically speaking, fingerstyle is most often played on steel strings.

Ultimately, fingerstyle can be played on either guitar.

Acoustic or classical for fingerstyle: which is harder on the fingers?

Steel string acoustic guitars are much harder on the fingers than the nylon strings of a classical guitar when playing fingerstyle.

Not only is the nylon softer and smoother, the nylon strings are also strung with way less tension.

The higher tension and hardness of steel strings requires a firmer pressure from the fingers to produce sound. The fingers will need to develop extra calluses to endure playing acoustic steel string guitars for long sessions.

These calluses develop on both hands when playing fingerstyle. The fret hand will need to toughen up for fretting, and the hand plucking the strings will need strong fingers too.

Steel strings are very hard on fingernails because of the increased tension and harder material.

That said, classical playing technique uses a combination of the flesh of the fingertips and the fingernails, so classical guitarists need strong nails to get a nice sound.

Fingerstyle players on steel strings guitars can play with fingerpicks on their steel string guitars to avoid hurting their fingers. This, however, is considered “fingerpicking” rather than fingerstyle to some musicians.

If playing a steel string guitar gets painful, and the player has access to one, playing the nylon string guitar is a great option for continuing to practice and allowing your fingers time to recover.

Which sounds better for fingerstyle?

That said, classical guitar also incorporates percussive elements such as pizzicato, a palm-dampening technique that involves using the thumb to produce various tonal effects on the strings.

Classical guitars also have advantages such as their superior balance between treble and bass tones. A classical guitarist has superior control of the guitar sound with each note being heard distinctly, ideal for fingerstyle classical music.

SEE ALSO:   Is Classical Guitar Harder Than Electric? What Do You Think?

The steel strings of an acoustic produce metallic tones, particularly on the higher strings, which isn’t the best for music outside of country and folk. The sound also compresses notes together without as much clarity in fingerstyle tone.

Although acoustic guitars produce bigger sound, classical guitars have a larger range of dynamics and tone, especially when played near the neck or the bridge.

So it really boils down to what style of music you wish to play fingerstyle. Acoustic guitar is usually the preferred choice for folk, pop, and country music while classical guitar is suitable for classical, flamenco, and bossa nova.

Acoustic vs classical: neck and ergonomics for fingerstyle?

Fingerstyle guitarists generally prefer guitars with wider nuts and string spacing. The extra space leads to a clearer sound from the strings, because fretting fingers have more room and ease of movement during quick passages.

Classical guitars have a wider nut (2″ nut width) and fretboard than acoustic guitars – which are typically between 1 11/16 inches to 1 ¾ inches. The wider neck is what creates the increased space between the strings.

The strings on an acoustic steel string are closer together, and so are the frets, which can help with fast playing.

On the other hand, the narrower neck of the acoustic guitar means the strings are closer together, and so are the frets.

This enables the player to move chord shapes more quickly, which is great for chord-based fingerstyle , but not for polyphonic music (individual lines occurring simultaneously).

While the larger size encourages more bass sound and projection, it also makes the instrument more cumbersome. The smaller body of the classical guitar is easier to position for fast finger playing.

SEE ALSO:   Is It Hard To Switch From Acoustic To Classical Guitar?

Overall, the string spacing is one of the most important playability factors for fingerstyle playing. For this reason, nylon string guitars have more room and are better suited to fingerstyle playing – aside from folk and Americana styles.

Is it possible to play an acoustic guitar like a classical one?

A significant difference in playing acoustic guitar versus classical guitar lies in the playing positions. As a result, playing one instrument like the other can take some adjustment.

The angle is achieved by elevating one leg on a footstool and resting the bottom of the guitar on the opposite leg.

The angle classical guitar is played allows more freedom in arm movement, but it might feel very odd to an acoustic player to hold their guitar this way when they’ve always positioned it over their leg without the angle.

Because classical guitars are traditionally played with the fingertips and nails, their lower tension nylon strings are definitely preferred for classical music.

It is possible to play the acoustic guitar in the same manner, however the high tension steel strings feel much harder on the fingers.

Can you play modern fingerstyle guitar on a classical guitar?

The brightness of the steel strings on an acoustic guitar allows for percussive string hits, tapping, and slap harmonics that are hard to do on a classical guitar.

The higher tension steel strings are also ideal for stylistic techniques like hammer-ons, pull-offs, and slides found in modern music. These sounds are not heard well on nylon strings because of their lower tension and softer volume.

In addition, the wider fretboard of a classical guitar is not suitable for certain modern fingerstyle techniques, such as using the thumb of the frethand on the lower strings.

Modern fingerstyle guitarists also experiment with alternative tunings. While steel strings can be tuned at slightly higher or lower tensions than usual, nylon strings would be unstable with too little or too much string tension.