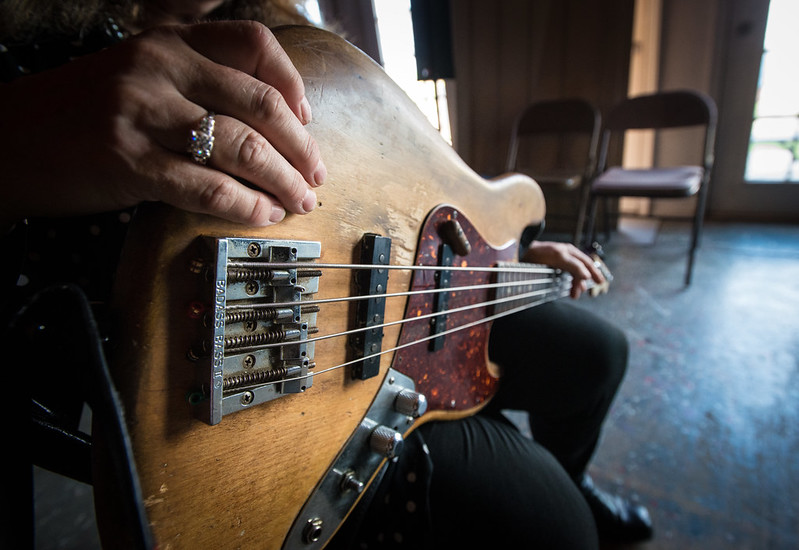 If you’re a newer bass player and have a bass with no amp, or if playing through an amp is not an option for you because of the noise, you may be wondering whether you can still study and practice the bass in an effective way.

Many people regular play the bass unplugged to practice scales and build finger strength. However, tone is an essential part of playing the bass, and playing without an amp can lead to bad habits. A bass can be amplified without an amp using a small headphones amp, a PC audio interface, or a DI box with a preamp pedal.

There are a few things you can do on a bass without any amplification at all. There are also many alternatives to a regular bass amp for hearing your bass.

Some aspects of the bass can be learned or practiced with amplification, including tuning the bass, practicing scales and finger exercises, and learning the fretboard and note positions.

Rhythm can also be practiced unplugged. Some bass players actually prefer to work on their timing by playing unplugged against a music track so as to better hear the recording and feel the timing through the tips of their fingers.

Some bassists argue that, while an amp is meant for other people to listen to you, a bass guitar in itself makes enough sound unplugged for practicing basic skills. Some feel that playing without an amp for a period of time actually forces them to listen more to their own playing and helps them improve their dynamics.

Playing without an amp can help build calluses on your fingers since it forces you to play harder.

On the other hand, others feel that having to play very hard just to hear yourself when practicing unplugged hurts your technique and slows your learning, namely when it comes to controlling your dynamics and tone.

SEE ALSO:   Bass Pick vs Fingers: Which Technique Is Better?

A major aspect of learning the bass is getting a good sound out of it, building your own tone, and achieving a cleaner sound – skills that cannot be learned without some sort of amplification.

While opinions diverge, my personal experience as someone who started the bass without an amp is that playing unplugged makes learning much harder. You also lose the encouragement and motivation hearing a nice bass tone from your playing gives you.

Playing the bass without an amp using headphones

A great way to practice the bass without the need for an amp is through headphones – with the added advantage of not bothering house mates and neighbors.

As you may have experienced it, however, plugging in headphones directly into the bass typically gives you a very weak, one-sided sound, and will generally drain your preamp batteries (for active basses).

Headphones can be powered using a small headphone amp or mini mixer. One popular such mini amp for bassists is the Vox Amplug Bass (Amazon). It’s a very portable, convenient, and affordable device with a decent tone (though not the best), great for practicing with headphones. It also has buit-in drum patterns and can also be plugged into a laptop (using a 3.5mm cable and 1/4″ male/female adapter). It has an Aux In for plugging in a smartphone or a metronome.

Some bassists use a line 6 pod (Amazon), also a well-rated headphone amp though pricier.

Some bass players who play without a bass amp choose to play into headphones through a bass effects pedal – cheaper than buying an amp and offers great tone shaping options. A 3.5mm-to-1/4″ jack is generally required.

In general, headphone amps are a good option for bass players without an amp, however, the combined cost of the small amp and headphones can sometimes add up to the price of a practice bass amp, which you also use with headphones. The Kona Fatboy FBGB 15 (around $40), for instance, has an mp3 plugin for mixing songs along with your bass sound through headphones.

Playing bass without an amp through a computer

Another good option for practicing the bass without an amp is using an audio interface with a guitar jack that lets you mix music from your laptop with the sound from your bass and hear it through headphones.

You may be wondering why you need an audio interface vs simply plugging the bass into your computer’s line in using a jack adapter. Using a basic onboard sound card like most PCs have, there will be a lot of latency (e.g. up to 5 seconds) as the card uses the computer’s resources, so the audio lags when the processor is busy.

A decent audio interface typically costs between $40 and $200 depending on features. It can be a good investment as it can last a long time. Beyond playing your bass, it will also allow you to record music and work with digital effects through DAW software (e.g. Garage Band on Mac).

A simple device like this cheap Behringer Guitar Link lets you plug in a music source and your bass so you can play along and even record the output. More advanced popular audio interfaces include the Focusrite Scarlette Solo (Amazon), the Behringer, and the Steinberg UR22 (pricier).

Combined with decent headphones (such as these) and a cable, such interfaces provide an affordable, portable, and versatile way to use your computer as an amp simulator.

One caveat to this approach is that audio interfaces are sometimes tricky to set up, particularly on Windows. Also, if you don’t like wearing headphones, you’ll need to invest in some decent monitoring speakers.

With an active bass, you can typically plug into the Line-in or Aux input of your home stereo using a 1/4″-1/8″ adaptor. Unlike a computer, plugging a bass into a stereo won’t result in any latency.

Be aware, though, that the typical small size speakers of a stereo can easily get damaged if the volume from your bass is too high or if the signal fed into the speakers has excessive bass frequencies – these should be EQ’d out a bit to avoid buzz or distortion.

Another option is to use your iPhone 4+ or an iPad as a bass amp simulator. You can use iRig, a small and affordable device that plugs into your bass guitar and allows you to use your phone as a portable practice amp with headphones – you use the Tonebridge or Amplitude app on your phone or tablet.

Playing bass live or recording without an amp

Some experienced bass players are proponents of not using an amp for live situations as they get good results using a DI box to plug their bass directly into the mixing board of live venues. DIs generally come with some sound shaping options including EQ and compressor.

Generally speaking, bassists who primarily play in larger venues equipped with FOH speakers may not need an amp. On the other hand, an amp rig is important for playing in smaller bars or places with small stages.

Some bassists actually own their own PA for their gigs and plug their bass directly into the mixer – again a good substitute for a bass amp.

One caveat of plugging directly into the PA via a DI is that your bass tone is at least partly controlled by the sound engineer. Also, good stage monitors are very important when playing through the PA – something a good bass amp can provide.

Using a preamp instead of a bass amp

Bass preamp pedals can also be an important part of an amp-less bass setup. Preamps can be used for recording, for running directly into a PA, or for plugging into a power amp.

The main advantage of a preamp is that they allow you to control your tone just like an amp would. Preamps also typically include a headphone jack.

Many experienced bassists choose to run their bass through a preamp (and additional effect pedals) and then into the mixing board via DI, as opposed to miking a bass amp for live playing or studio recording. Using a preamp allows you to send a shaped signal into the board instead of just the plain output of your bass.

Examples of good tone-shaping preamps that can be used as a substitute to an amp rig include the SWR Grand Pre, the Hartke VXL, or Sansamp and Darkglass programmable pedals. These are great for plugging directly into the PA while shaping the tone you want.

See this post for more about using a bass preamp.

While there are many ways to play the bass without an amp, unless you are recording, a practice amp may still be a better choice. A decent practice amp like a Fender Rumble 15 or an Ampeg BA 108 (Amazon) can be had new for a little over $100.