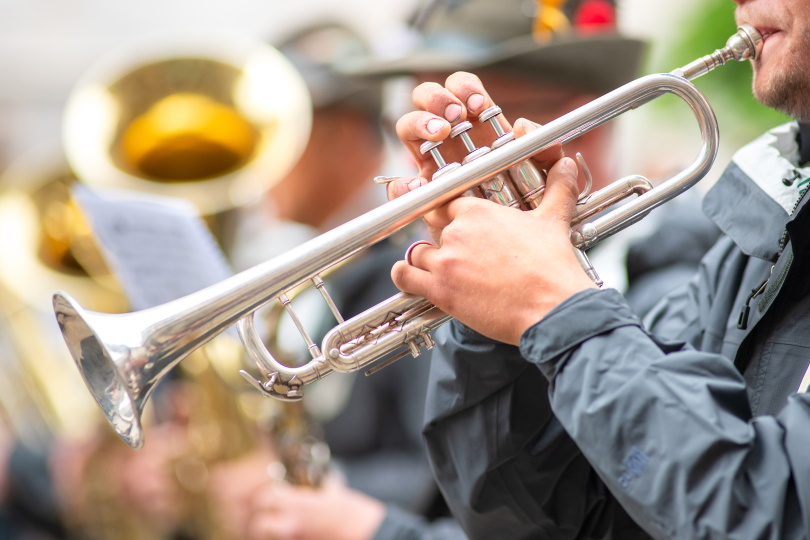 Marching band is a great way for students to meet people, and better adapt to high school/college life. Among the instruments that compose a marching band, the trumpet is a key element.

A very common question among parents and students is how to choose a good trumpet for marching band.

Most marching bands don’t require a very refined sound, and instruments are often roughed around during practice. Therefore, investing in an expensive horn may not seem be a wise choice.

On the other hand, some students will continue to play their trumpet for years (e.g. through college), and will also use it for indoor and concert.

So should you get a entry-level, intermediate, or pro horn? How much should you pay for it? Is it better to get a new or used trumpet? What are some of the best options out there for marching band?

A used Bach Stradivarius or Yamaha Xeno is generally a good and affordable long-term investment. These two trumpets are likely the most vetted trumpets out there due to their quality build, good sound, and affordable price.

The following are some of the most popular trumpets for marching band:

It’s often advised to choose an inexpensive trumpet for marching band as the probability of damage is relatively high, e.g. when leaving the instrument in the bleachers, or through other players bashing into it while marching.

SEE ALSO:   What Instrument Should I Play In Marching Band?

High school marching band or sports pep band are particular risky for trumpets, so a student model priced in the $200-400 range is often a good choice. These are generally well-suited for middle to high school bands.

For these situations, parents and band directors recommend choosing a basic trumpet that’s easily serviceable and can be repaired at an affordable cost if it gets bashed.

It’s also important that the trumpet look decent from a distance. Some marching bands require that all trumpets have a matching lacquer or silver look on the field.

That said, some argue that cheaper Chinese-made horns have thinner metal and lower quality control, so dropping the trumpet during marching band (a common feat) may result in a lot more damage than on a pricier horn.

Some high school marching band students take very good care of their trumpet, protecting it during practice and cleaning it afterward. For these students, a higher-end instrument may also be worth it.

Playing the trumpet in a marching band generally requires less finesse and nuanced sound compared to ensemble playing. In many marching bands, sound quality is not that important.

Few listeners in the stands will generally hear the difference between a low-end and a pricier trumpet.

Therefore, parents and band directors generally advise not spending more than $1000 for a trumpet if it’s only for marching band. King trumpets, for example, are a popular option.

That said, some competitive marching band programs and drum corps have very stringent criteria for trumpet sound, and require higher-end trumpets like the Xeno, Yamaha 8335, or 8345.

While a good entry-level trumpet is often good enough for high school marching band, you should take into account the player’s long-term needs.

College marching band, for example, may justify a higher-end trumpet. A serious college player may in parallel join a concert band, jazz band, or orchestra, for which a pro grade horn such as a Bach Stradivarius 37 may be justified.

Some students (or parents) choose to get a pre-owned professional trumpet instead of a new student horn. Assuming the used horn is in good condition, a pro trumpet will offer a fuller richer sound.

Marching band, though, often involves slogging through dirt, mud, or snow, so a pro horn will need extra care if used for that.

For this reason, many students choose to invest in both an entry-level trumpet (e.g. Old Ambassador) for outdoor, and a nice used pro horn for indoor and concerts.

You can usually find a good trumpet that can play you through college for around $1000. Alternatively, there are very decent intermediate/professional Yamaha trumpets in the $800-1500 range.

Another factor in deciding on a good trumpet for marching band is student motivation.

Parent are often willing to invest in an instrument their child will be excited to play and that s/he can use for a few years for concert band, jazz band, and ensemble/solo as well.

For young marching band players, the weight of the trumpet is an important factor. Lighter trumpets will be more comfortable and pleasant for them to play.

Parents often recommend an M or ML trumpet with decent resistance and a 7C mouthpiece.

Now, let’s go over some of the best trumpets for marching band.

If you choose to get a beater trumpet for marching band, the vintage Olds Ambassador is generally considered a top choice. They are sturdy and not easily dented, and play quite well.

Compared to a higher-end horn like a Bach, the Olds Ambassador is student horn that is more difficult to blow and with a volatile C to D shift in the upper register that makes scale playing less smooth.

The Ambassador has a larger bore (tubing diameter) than the Bach. It has an extremely rich tone, but intonation is not nearly as good as the Bach.

The Ambassadors are very affordable and considered the best value. Many marching band players feel that but nothing matches for “straight-up wailing to the bleachers”.

King student trumpet models are very popular choice for marching band rehearsal and outdoor situations. When in good condition, it can also make a decent trumpet for concert.

Everyone generally agrees Kings trumpets offer great value and are very well-built and sturdy. Their larger .462-.463 bore makes them great for marching, particularly when used with an open mouthpiece.

More demanding players may feel the metal is too thin and the trumpet doesn’t sound as great in the higher register.

SEE ALSO:   Can You Play Oboe In Marching Band?

You’ll commonly hear people say you can’t go wrong with the Xeno – a higher-end trumpet that can be found used at affordable prices.

Like the Bach Stadivarius 37, the Xeno is well-established and considered one of the best all-around trumpets for a student.

As mentioned earlier, a Xeno can last for many years and is fantastic for concert and orchestra. It can also be used for marching band provided it’s well cared for.

The only caveat is that the Xeno is a bit heavy for a first or second year high school marching band player.

A more budget alternative to the Xeno series is the Yamaha 6335. This trumpet is well-priced on the used market and has a reasonable weight for marching band.

The 6335 is a very serviceable instrument. It can make a great “outdoor trenches” option while saving your more expensive trumpet for indoor and concerts.

Most serious college students play a Bach Stradivarius, either the 37 or 43 model. It’s the world’s best-selling professional-grade trumpet and is always a safe choice.

The Bach 37 is without any doubt a great choice if the student plays concert as well and is likely to continue to do so for a long time.

Whether this trumpet is a good choice for marching band depends on how harsh the outdoor conditions are and how well the student takes care of it during and after practice.

Bach Stradivarius trumpets are readily available in the used market. A silver-plated horn in very good condition can often be found under $1500. This model also holds its value very well and resells easily.

Some students find the intermediate Bach TR200 a good budget alternative to the Stradivarius series. It’s sometimes argued though that the TR200 doesn’t belong to the same league as the Strad and Xeno.

The Getzen 700 Eterna is widely viewed as an excellent intermediate trumpet with reasonable prices in the used market.

It produces a very bright sound. It’s not mouthpiece-specific and comes with Amado water keys. Some players don’t like the third slide adjustable ring – though that’s generally not a deal breaker.

The 700 Eterna II (and any Getzen pro model) is a great trumpet choice for all-around student use.

Marching band is a great way for students to fit in, make friends, and get started on the trumpet. They should definitely be encouraged to join a band.

That said, kids should also practice more complex music outside of marching band in order to become well-balanced musicians. Therefore, investing in a decent trumpet is almost always a good bet.