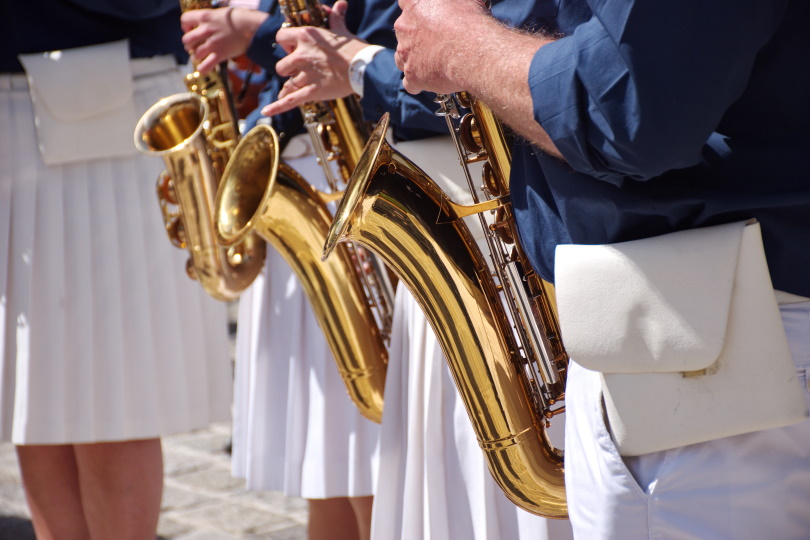 In the band world, concert band and marching band are contrasting settings that are best approached with different saxophones. Because marching band is primarily outdoors, you want to carefully choose the instrument that you are exposing to the elements.

The best saxophone for marching band is an inexpensive alto or tenor saxophone with decent playability. High quality or pro-level alto and tenor saxophones should be reserved for indoor playing because they are expensive, and the baritone saxophone is both expensive and quite unwieldy.

Luckily, there are several brands and models of saxophones that are affordable and suitable for outdoor playing. Let’s first look at some of the most popular saxophones for marching band.

In general, Yamaha student saxophones are a great choice for marching band due to the ease in maintenance along with their good tone, durability, and value.

A widely available, inexpensive student tenor saxophone that is great for marching band is the Yamaha YTS-23 model. It offers a nice sound and is very durable – many say bulletproof.

This model is the discontinued predecessor to Yamaha’s current student model, the YTS-26, so it can be found at a very reasonable price, usually for less than $1000.

Although it is no longer manufactured, the parts are easy to come by, and the adjustment screws have been thoughtfully placed.

Find a used YLS-23 on Reverb or on Amazon

The Leblanc Vito tenor saxophone is comparable to the Yamaha YTS-23 and is equally qualified for marching band. In fact, Vito alto and tenor saxophones stamped in Japan are made by Yamaha.

Because these instruments are basically identical, the parts are interchangeable and easy to obtain. This saxophone has great value, costing hundreds of dollars vs thousands, similar to the Yamaha.

Selmer Bundy is one of the most popular choices of saxophone for marching band because they are extremely resistant and budget friendly. They are also reputable for being loud and easy to play.

SEE ALSO:   Can You Leave a Clarinet Assembled? Things You Should Know

Selmer is a reputable saxophone maker, and Bundy is their student horn. Described as the old “workhorse” of saxophones, thousands of these saxophones have been manufactured over the years and survived the abuses of outdoor marching band.

The Selmer Bundy line has alto and tenor saxophone models. They are great beginner and marching band horns due to their value and ability to withstand the rigors of marching season.

On the higher end, there are the Martin Committee III alto and tenor saxophones.

This line offers volume, projection, and steady intonation, which are all great for marching outside as well as indoor playing.

The Martin Committee III saxes are at a higher price point. You might be able to find one in playable condition for around $1200-$1800.

What to look for in a good sax for marching band

In general, get the most inexpensive sax that works. The sound and intonation need to be at least passable, but it is not necessary to be the best since the nuance of tone will not be heard outdoors.

Good quality, pro-level saxophones like the YTC-62 or Yanagisawa are not for marching out in the street or on the field. Consider a student level or intermediate horn instead, or a higher-end used saxophone.

Some serious marching bands require certain appearances, such as all silver or all gold horns. Check with your director and the program before making a purchase.

Alto vs. tenor vs. baritone for marching

The alto saxophone is best for marching band. It is lighter than the tenor or baritone sax, and its music is typically more fun to play.

Tenor saxophones are lighter than baritones, heavier than altos, but also manageable on the field or street. Many marching bands use them to fill out the mid-low voice of the band.

SEE ALSO:   How Long Does A Clarinet Reed Last?

Due to its size, shape, and weight, the baritone saxophone is not recommended for marching band. At nearly twelve pounds, the bari sax hangs down in front of your thigh and is not ideal for proper marching.

While the baritone can be marched, the player will need to build physical endurance and equip a quality neck-strap or harness to assist in managing the weight and size.

The soprano saxophone is even lighter than the alto but there are few soprano saxophone parts written for marching band. Those that are are often specialty and presented as solo moments at the front of the field of a halftime performance.

You should generally no more than $500-$800 range on a new marching band saxophone, or even less for used instrument. In comparison, expect to fork out around $2000 to $2500 for a dedicated concert band saxophone.

Saxophone makers Yamaha and Vito have student model saxes that are great fits for marching band. They offer both good intonation and ergonomics at reasonably low prices.

If also playing in concert band

It is best to buy two separate saxophones – one for marching band and one for concert band. This way, your higher quality, higher-priced concert band instrument won’t be taken outside where it is more likely to be damaged.

If that is not an option and you can only buy one horn, go with a student or intermediate horn that has modern ergonomics and solid construction.

Yamaha, Vito, and Selmer USA are reliable brands that offer sturdy saxophones with good intonation and a nice, warm sound that works for concert band playing, but will also hold up to the wear and tear of outdoor playing.

Getting a used sax for marching

If possible, try to play the saxophone before you buy it so you can hear if it has the projection and see if it’s built solidly enough for marching.

Used saxophones are great candidates for marching band, however, be mindful that if the instrument needs a lot of repairs, it might not be worth its low price.

Saxophones that have been played outside for any duration should be given special attention to keep them in good working order.

An additional consideration for saxophone players preparing for concert band versus marching band is the mouthpiece and reed setup.

Various combinations will offer unique tones that serve each setting differently. Because marching band is outdoors, projection is the primary focus.

Synthetic reeds are a popular choice for marching band because they have more bite to the sound and offer incredible durability for a reed.

A jazz style mouthpiece will provide more projection over a classical mouthpiece for saxophone because they typically feature a wider tip opening and high baffle. This creates free blowing and thus more projection.

The Rico Metalite or Vandoren Jumbo Java are two examples of great mouthpiece options for a louder sound.

Concert band playing requires a more refined tone. If you need a versatile mouthpiece that can be used for both concert and marching band, look at mouthpieces such as the Selmer C* and Runyon custom.

These offer all-around balance between tone and sound projection.

Woodwind instruments like the saxophone are not made to play in wet conditions, and can be quickly rendered unplayable should moisture deteriorate the delicate parts.

It is vital that you properly swab out your saxophone after playing outdoors to remove moisture and preserve the life of the keypads, corks, and felts.

Although most of the saxophone keys default to being open, there are a few that default to being shut. Open these keys to allow them to dry when swabbing out your instrument and ensure no moisture is trapped.

To make sure your saxophone is protected, you need a hard case. Soft cases or gig bags are nice and light, but not ideal for the demands of marching band travel and weather exposure.

Have your case nearby in the stands when playing outdoors in case of any precipitation.