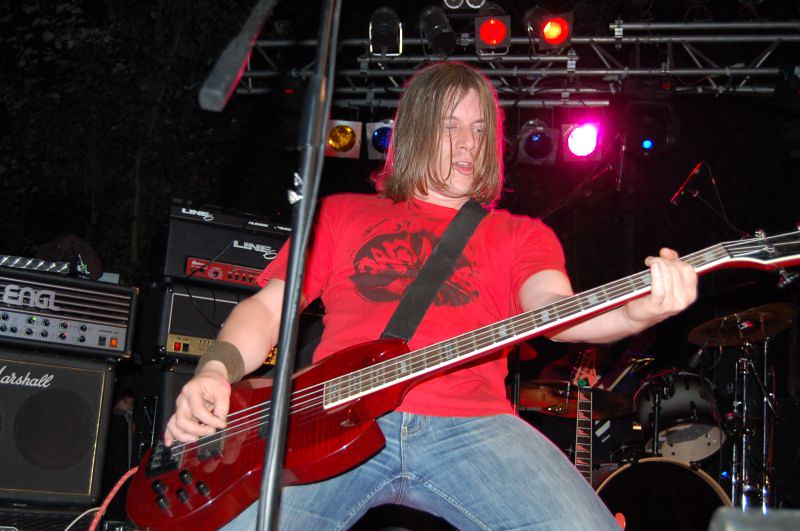 While new bass players generally learn to play using right-hand finger plucking techniques, many bassists choose to play the bass with a pick. As a newer bass player, or as an intermediate one joining a new band or getting into a new musical style, you may be wondering which approach to choose.

Whether to play with fingers or a pick depends on the tone and rhythmic feel you want to achieve. A pick gives you a sharper, more percussive and driving tone and allows you to play faster 8th/16th notes on a single string. Finger plucking gives you a rounder sound and is better for a pocket feel and frequent string changes.

Playing with a pick generally produces a more aggressive and articulate tone which helps the bass cut into the mix as a rhythm instrument. The ability to alternate up and down strokes at a very rapid pace (aka tremolo picking) lets you play super-fast patterns on one or two strings.

Most bassists prefer to use finger plucking for laying down a foundational groove with a larger tone. The attack produced by a pick is not as appropriate for this goal. Finger plucking gives you better control over the strings and produces a more fluid and mellow kind of tone compared to a pick.

Fingers playing on the bass also makes skipping strings easier and lets you play two notes at the same time spanning more than 2 strings (e.g. for a 10th double stop). Playing with the fingers also allows you to easily swap to slapping and back during a piece.

Both pick and finger plucking have their advantages and limitations and should both be part of a good bass player’s toolkit. Choosing the right-hand technique for a groove is akin to selecting the right pickup, the right bass, and the right plucking position for achieving the desired sound.

Andy Baxter Bass & Guitar · 1974 PB SB 409698 Fingers / Tone full/ off / Pick/ Slap
*This post may have affiliate links, which means I may receive commissions if you choose to purchase through links I provide (at no extra cost to you). As an Amazon Associate I earn from qualifying purchases.

As mentioned, the pick typically gives you a sharper attack, while fingerstyle playing provides a much rounder and woolier sound with a smoother punch appropriate for song with mellow tones.

With newer players, finger plucking can sound undefined. However, definition quickly improves with technique and with the calluses that build up on the fingers. Note that there’s no way around getting blisters when playing fingerstyle, however the calluses become painless once they get thicker.

With the right technique, hard finger playing can actually bring up more attack than a pick due to the trebles from the strings hitting the frets. See this post for more about how hard to pluck on a bass.

Frequently, “normal” (not hard) fingerstyle bass plucking technique in a live setting will cut through the mix better than a pick since a lot of the treble produced gets lost in the mid-high range of the other instruments.

On the other hand, a pick can produce a purer attack and sound when playing hard as it leaves out more harmonics compared to finger playing, which is great for bass recording.

Another reason pick playing often provides a cleaner sound on the bass is that, in contrast to apoyando-style finger playing, you don’t get the noise of the finger hitting the lower string when following through.

While slapping and popping requires finger playing, similar-sounding attacks can be obtained with a pick and some additional gain. Conversely, a pick-like tone can be achieved by digging it harder and adding some extra treble.

Many bassists are attached to the 60s-like tone of a P bass with old flat strings played with a pick.

Fingerstyle bass playing has the advantage of letting you always have a free finger for string muting, making it suitable for playing more complex and spaced rhythms. When you pluck, your finger follows through on to the next string and mutes it.

SEE ALSO:   Should you switch from guitar to bass?

In contrast, playing with a pick makes it harder to mute the string adjacent to the one your playing. This is actually an advantage when you want to let a string ring for playing another note against it. Pick playing also typically works great for palm muting.

Another area where bass fingerstyle and pick-style playing differ is rhythm. On the one hand, finger playing lets you add more groove and articulation than pick playing, and hence works best for very groovy songs. For example, many bassists prefer to play syncopated funk lines with their fingers as they’re able to play faster.

On the other hand, a pick lets more easily play a same note fast while keeping the pace with less strain on your fingers. E.g. punk and metal songs that involve rapid repetitive 8th or 16th notes during a relatively long time span.

It’s worth noting though, that using a pick on the bass for fast punk music sometimes lead to wrist strain because of the heavy string tension. In these cases, it’s best to revert to fingerstyle.

Also, picking the bass with a plectrum works best when there is little string skipping, while fingerstyle playing is best where dynamics are involved.

Besides speed and rhythm, power and expressiveness also influence whether to play with fingers or a pick on the bass.

While some people use the pick to get more power, bassists with proper apoyando technique are generally able to play just as loud, or even louder, using their fingers.

Also, while playing the bass at a fast tempo can be easier with a pick, very high speeds can also be attained with two or three finger plucking techniques with high coordination.

Many bassists feel that, using a pick, they’re able to play accents much more evenly on fast 8th or 16th note patterns due to the homogeneous nature of the up and down strokes. While fingerstyle plucking can fast as well, the sound is generally not as homogeneous across finger strokes.

As mentioned though, fingerstyle bass has the upper hand for dynamics. Fingers offer much more subtle and versatile variations and character – truly soft notes, more distinguishable accents. Playing with a pick is generally a good option if the focus is on volume and velocity vs expression – e.g. in punk and metal.

Many metal bass players favor the pick, as the harder edged attack helps them be heard, and lock in with the guitars that are playing fast and repetitive patterns. A good bass with flatwound d’addario’s medium gauge played with a pick can produce a great-sounding punchy metallic sound with a nice growl.

Some new metal bassists, on the other hand, prefer fingerstyle as it allows them to throw in a slap and pop once in a while.

Rock bassists like John Paul Jones and John Entwistle are known to constantly alternate between pick and fingers for varied tones and playing techniques.

Some bass players in other styles e.g. soundscape commonly use a pick for playing around the high part of the neck while adding delay and reverb effects for high and clean attacks.

To recap, the ability to play with both your fingers and with a pick makes you a better bassist as you can mix and match techniques based on the music played. Pick playing gives you sharper attacks and percussiveness, fast repetitive note playing, unmuted riging notes, and homogeneous stokes and accents.

Finger plucking gives you speed and agility for string skipping, warmer and rounder tones, great dynamics and sensitivity for complex and syncopated rhythms, and the ability to dig in hard and switch back and forth to and from slap & pop.