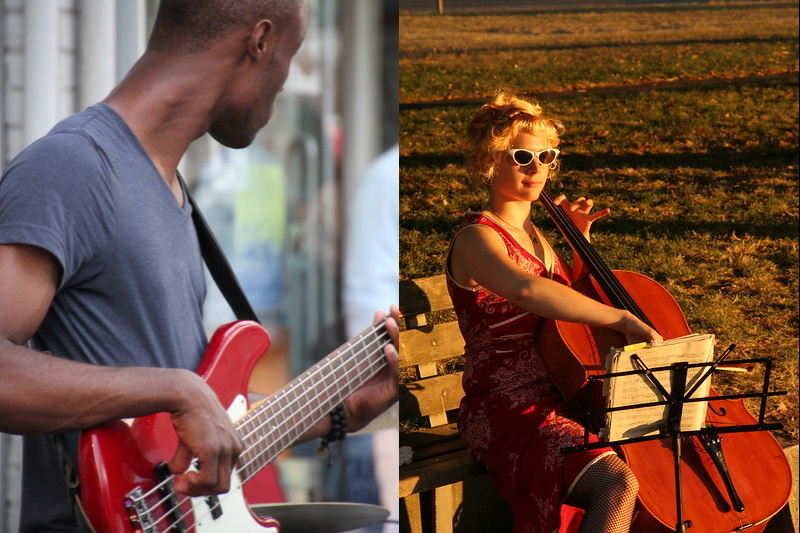 It’s becoming increasingly common for cellists to take on bass guitar and move to more modern forms of music. On the other hand, some bass players are attracted to learning the cello as an alternative to the upright bass. How different are the bass guitar and cello? Do cello skills transfer to bass guitar or vice versa?

Bass guitar and cello share some important characteristics such as the number of strings (most bass guitars have 4 strings) and an overlapping frequency range. The two instruments, however, are held, tuned, and played very differently.

The reason these two instruments are often compared is because both produce lower-end tones and the cello can be played pizzicato (finger plucked) just like the bass. Playing the cello (pizzicato) also has similarities with playing a fretless bass.

The bass guitar is tuned in fourth (low to high E, A, D, G) while the cello is tuned in fifths (C, G, D, A). This makes playing these instruments very different. Some cello players try tuning the bass in fifths like a cello – and actually enjoy it – either an octave below the cello (on a 34″ bass) or using the cello pitch (on a shortscale).

Tuning a bass guitar in fifths, however, increases string tension and can lead to a higher-than-comfortable action or even a warped neck. Non-standard gauges and neck adjustments can alleviate the issue somewhat.

A bass player looking to get into cello for playing modern music (jazz etc) can easily tune a cello in fourths provided appropriate strings are used. This will save you a lot of time and effort for learning to play on the cello.

The cello is somewhere in-between a large violin and a small double bass. It’s held upright like an upright bass and played sitting. The bass guitar, on the other hand, is held horizontally like a guitar – at almost a 90º angle compared to the cello – and is most often played standing with a guitar strap.

The cello can be played with a bow or pizzicato, while the bass is plucked or picked with a plectrum. The bowing technique is obviously very different from the alternate finger plucking technique used on the bass – which is closer to pizzicato.

Cello prices start at around $400 while entry-level bass guitars can be had new starting at $150. A bass guitar, however, requires an amp for playing, but bass + amp beginner packages are available starting at $300+.

On the cello, in the low positions, the first finger covers 2 half-steps while the rest of the fingers each cover one. As you move up the string one octave, you start using your thumb for the first position while your other fingers each span two half-steps, similar to the violin.

Pizzicato technique on the cello is more vertical than on the double bass (particularly jazz bass). Cello pizzicato skills are helpful for the bass guitar, although they don’t transfer over as well as double-bass-style pizzicato.

Cello players learning bass guitar need to specially focus on alternate plucking with the first and second fingers and moving between strings with the right hand.

Maintaining a light touch on the bass guitar is important for faster learning – thus a good amplifier is important to prevent a tendency to pluck too hard.

One major difference between playing cello and the bass guitar is the predominance of rhythm. Cello is first and foremost a melodic and harmonic instrument, while bass is typically considered a rhythm instrument first, then harmonic, then melodic.

While rhythm is important for any instrument, a bass guitar is part of the rhythm section along with the drums and rhythm guitar. The bass is a bridge between the drummer and the other instruments (guitar, piano, etc).

Some of the best bass lines in music are made of very few notes played with a solid pulse and groove. The bass player needs to really feel the song to drive the music. The timing of notes is essential.

SEE ALSO:   How hard should I pluck bass strings?

The attack of the notes on a bass guitar are also much sharper than bowed cello notes.

It can be argued, though, that the role of the cello in a string quartet is somewhat comparable to the bass player’s as the cellist often acts as the conductor and metronome. The cellist, however, focuses more on playing the notes on the sheet music vs laying down a groove.

Knowing the cello can help in learning the bass guitar in indirect ways, including being comfortable with building melody lines in low frequencies, and having built strength in the hands.

On the other hand, moving from bass guitar to cello isn’t easy and involves going from fretted to unfretted – requiring a strong sense of pitch.

The bass guitar is technically much more forgiving than the cello, with a lot more room for action before using truly improper technique. Long-time cello players, after of month or two without playing, often have a hard time hitting even first position notes.

Bass players, in contrast, can generally pick up the bass and play songs even after long breaks.

The cello can hardly be self-taught and is much harder for technique, while basic bass guitar skills can generally be learned on your own without lessons, by watching other players and practicing alone.

However, playing at more advanced levels on the bass guitar requires learning a lot of music theory, while the cello primarily involves reading single-lined sheet music.