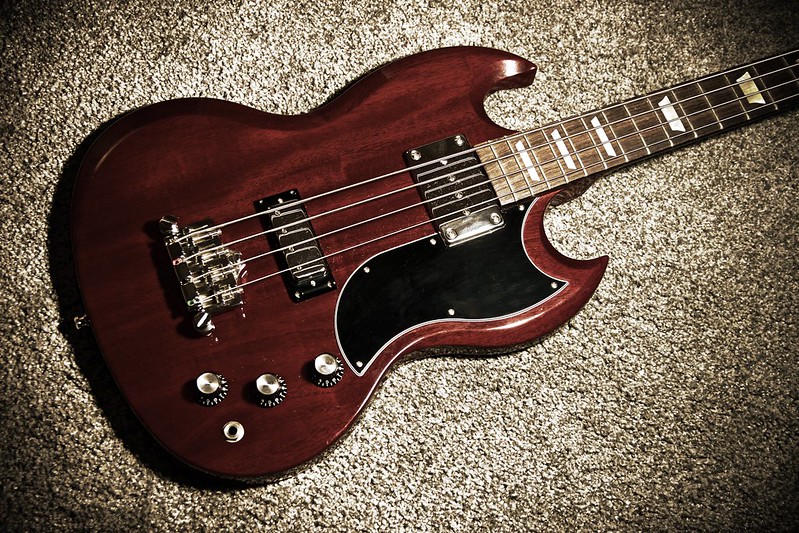 While Gibson electric guitars enjoy legendary status among guitar players, Gibson bass guitars are a little more divisive. On one hand, many people think of them as inferior to Leo Fender’s standard bearer. Others, however, love the unique sound and character of a Gibson bass.

Gibson basses are underrated. Some of the greatest bass players of all time have used a Gibson. Even though Fender’s classic tone and famed versatility have made their basses the #1 choice for many, there’s no doubt that Gibson makes very special bass guitars.

Still, there’s a reason for the dissension. Despite killer looks, a deep tone that harks back to the sixties and a singular feeling that appeals to a certain player, for a Gibson bass to sound good, it requires a certain touch, a certain style of music, and a relatively small mix of instruments.

When played alongside many other instruments, a Gibson bass might turn the music into a big muddy mess, swamping up the song and killing the groove. For a dirty rock 3-piece with plenty of room for the bass to assert itself, however, the Gibson bass can be spectacular.

Some classic Gibson basses, although flamboyant and beautifully designed, are quite bulky and heavy for smaller players and are known to present certain ergonomics issues.

Let’s take a deeper look at a guitar legend and discover whether its low end stands up to scrutiny.

How popular are Gibson basses?

While never challenging Fender’s dominance in the bass guitar market, Gibson has produced a number of great bass guitars over the years. Many big name bassists helped forge a reputation for Gibson as a maker of fine bass guitars, as well as amazing electric guitars.

The EB-3 became one of the most popular Gibson basses after being adopted by Cream’s Jack Bruce, a virtuoso bass player with a unique sound, in the sixties.

In the 90s, the Gibson Thunderbird, with its sleek, unique look, became one of the most popular bass guitars in the world after being chosen by grunge icons Krist Novaselic (Nirvana) and Kim Gordon (Sonic Youth).

SEE ALSO:   Lakland Skyline vs Fender American: Which Is A better Choice?

While not as popular as its standard electric cousin, Gibson Les Paul basses also have enjoyed a lot of popularity over the years due to their iconic curvature design.

The popular Gibson bass guitars have big humbucker pickups that produce a heavy, solid sound very different from the clean, bright tones of a Fender.

The big single pickups found on the early ‘60s EB models were dubbed ‘mud-buckers’ due to their big brazen sound, written off as muddy by its detractors. These are guitars you either love or hate.

When turned down low, the EB basses sound almost like a stand-up bass. Turned up to the limit they produce a distorted tone that, if used subtly, can sit perfectly alongside a bluesy guitar. This works particularly well when the bass doesn’t have to fight many other instruments.

On the other hand, in a larger mix with multiple guitars, keyboards, backing vocals etc, Fender basses work better as their soft, bright tone is able to stand out and cut through the mix in a way that the Gibson EB can’t.

Jack Bruce and Krist Novaselic, two of the most famous Gibson bass players of all time, played in powerful 3-piece bands that brought the best out of the heavy tones of a Gibson bass.

The deep tone of a Gibson bass, particularly the earlier models like the EB0 and the EB3, is what makes them so special to fans, bringing a devilish, dirty alternative to the ubiquitous bright trebly tone of the Fender bass.

“I wanted to play bass like a guitar, and you can’t do that on a regular Fender; you can’t bend the strings … I wanted it to sound very personal. So the EB-3 fit the bill in all of those ways – I was able to get some great distortion, and it didn’t sound like a Fender at all!” – Jack Bruce, bass player from Cream

It takes a certain type of player to appreciate the specific tone of a Gibson bass, based on the individual style of the bassist and whether their technique and touch gets the best out of a Gibson bass.

When set up through a Marshall Stack like Jack Bruce in his Cream heyday, Gibson basses have enough clarity to stand apart from the guitar, drums and vocals, enough bite and character to propel the song and still bringing a nice little buffer to the bottom end.

Gibson designs are also considered a work of art, and a Gibson bass will look amazing hanging on your wall.

SEE ALSO:   Best 5-String Bass For Small Hands: What To Look For

The most notable weakness of Gibson basses is the price tag. While Fenders offer excellent value for money – with high-end Fender Player Series P-Bass guitar retailing at around $800 – Gibson bass guitars can cost way over $1,000.

The Gibson Thunderbird, for example, starts at around $1,800 – a sizeable investment, especially considering its lack of versatility.

Many Gibson basses – from the Thunderbird and the SG to the EB and the Les Paul – are big, flamboyant instruments, which for some is a big turn off. Many bassists value Fender basses precisely for their no-frills approach, putting playability and simplicity over extravagance.

For those bassists with smaller hands, or anyone looking for a bass that feels a little like a standard electric, Gibson basses are a good choice. For everyone else, the crowded frets and short necks are far from ideal.  The ¾ scale also proves to be too restrictive for a lot of bassists.

Some Gibson basses are replicas of their guitar models, e.g. the Les Paul or SG guitars. Many bass players feel these basses are just an afterthought offshoot from their legendary standard electrics.

While high quality, they compete with Rickenbacker, Warwick or Fender which are a lot more versatile, suitable for a wide variety of styles and able to produce a diversity of tones.  Gibson basses, despite their big, bold charm, are often seen as a one-trick pony, a flashy instrument that can pull off big punchy sound, but little else.

Gibson basses are also known to suffer from ergonomics issues. For one thing, the neck of a Gibson bass is typically narrow yet quite fat which can make them very difficult to get to grips with for some.

The Thunderbird looks great but is beefy and long, most suitable for bigger players. The bass’s length makes it awkward for smaller stages. The heavy weight at the headstock also makes it “nose dive” and possibly hit the floor. Such issues can be annoying on stage where control and ease of movement are essential.

Above all, Gibson bass detractors point to their sound. For them, the ‘mud-buckers’ of the older models produce a soupy mess of a low end, made even worse when used out of the context of its era – the small blues and jazz clubs of the early ‘60s. Played in a big modern arena with a huge PA system, a Gibson EB-3 may not sound good at all.

Let’s take a brief look at some of Gibson’s most popular bass models.

The ultimate ‘60s bass rebel, the EB series (and most notably the EB-3) was made famous by Cream’s Jack Bruce, one of the greatest bass players of all time. An iconic look, big booming low end, and relatively small size.

Classic rock reverse-body design, thunderous low end and pianoesque sustain. Introduced in 1963, the Thunderbird shaped the bass sound of many influential bands of the 60s and 70s and the 90s grunge scene, entering the rock music hall of fame..

Produced for a short period of time, from the early to mid ‘80s, the Gibson Victory bass is one of the most versatile of all the Gibson basses. Though not a big early success, its sleek, retro-cool design is much more appreciated today than it was in the ‘80s.

The Gibson Les Paul Triumph was a cult favorite throughout the ‘70s. Its unique sounding low-end punch was used in many funk records of the era, as well as many classic rock songs. However, it’s a very heavy and clunky bass guitar which requires a special lead provided by Gibson with a transformer built in at the amp end to get the best out of it. Neverheless, the Les Paul is more versatile than most other Gibson bass guitars.

The bass version of the classic Gibson, complete with its iconic look. While the SG Bass lacks in versatility, its tone works wonders in the right situation. What might sound muddy and boomy in one scenario, can sound dark and powerful in another.

If you’re after comfort and flexibility, Fender basses win hands-down. They can slot snuggly into any type of music and bring a soft, pleasant cushion to the low end. You know what you’re getting when you buy a Fender bass and you know it’s going to serve you well for years to come.

Gibson basses, on the other hand, are tricky to tame. Played like a Fender, they can sound terrible. Fenders are a lot more forgiving and can make even a bad player sound decent. With a special playing touch, however, Gibson basses produce a tone like no other.