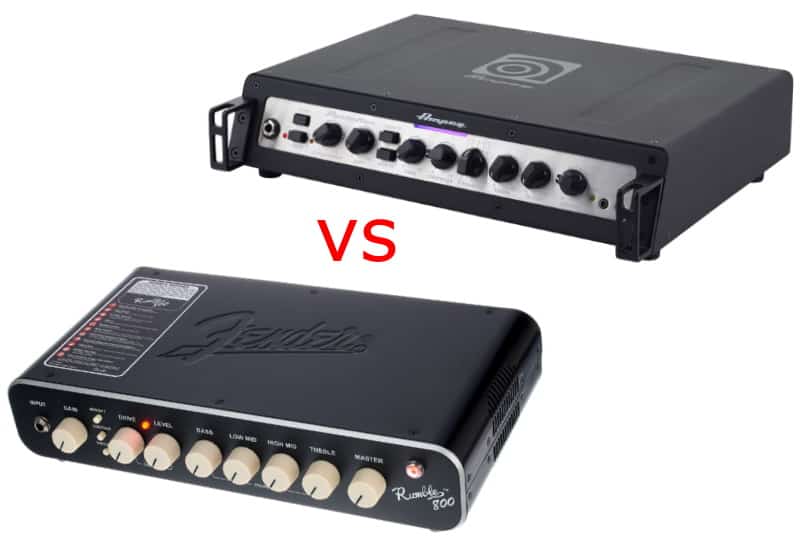 Fender’s Rumble series has dominated the market as one of the lightest and best-selling bass amps. It has a well-rounded tone praised by rock, blues, and funk bassists. The Portaflex (PF) amp heads are powerful, lightweight, and bear Ampeg’s signature sound. They are hailed as great vintage-sounding amps.

With the Rumble 800, Fender offers an exceptionally low weight, an overdrive feature, and great ease of use. Ampeg, on the other hand, offers a built-in compression, 5-position mid-control, and a -15 dB/mute function.

Ampeg’s PF-500, PF-800, and Fender’s Rumble 800 compete in the same price bracket, with the PF-500 being the cheapest of the three. The main difference between the PF500 and PF800 is that the latter has more headroom.

The PF800 costs roughly the same as the Rumble 800. So, for a fair match-up, we will primarily compare the PF800 and R800 with the occasional shout out to the PF500. Let us start with a quick overview of the two units.

Rumble 800 HD is the mainstay of the Fender’s modernized bass range. It is a compact, ultra-lightweight, and immensely powerful unit with an onboard overdrive, three voicing buttons, a 4-knob control panel, and a plethora of routing options. It is designed to match Fender’s flagship Rumble cabinets as a flat-top but it performs equally well with various non-Fender cabs.

This solid-state Class D amp offers easy-to-dial tones and a neatly laid-out preamp panel. It packs a heavy punch of 800W @ 4 Ohms with a recognizable warm/rounded tone that underpins the classic Fender sound.

The R800 is extremely lightweight and offers a lot of value for the price. Check out an this demo of the Rumble 800 HD:

The PF-800 is the crowning glory of Ampeg’s Portaflex line of Class D bass amps. This ultra-compact unit offers power and headroom alongside the “Ampeg tone” – mid-rich punch with deep lows often described as vintage. It can be paired as a flat-top with the Portaflex Series cabinets.

It packs 800W @ 4 ohms and is fitted with Ampeg’s MOSFET preamp with additional mid-tone control and an ultra hi/lo boost. This feature-packed amp punches above its price bracket with high-end features like an onboard compressor, attenuator pad, mute button, and power amp in and preamp out.

Now that we have an elementary understanding of the two amp heads, let us see how their key features fare in a side-by-side comparison:

The Rumble 800 is a meager 5.8 lbs, the PF500 is 11 lbs (5 kg), and the PF800 is 11.8lbs (5.3k kg). Although the Ampegs are pretty lightweight, Fender is the unmistakable winner and you will be hard pressed to find anything lighter than the Rumble in this category or price bracket.

The cabinets share the same difference in weight. For instance, the PF-210HE weighs 48 lbs (21.6 kg) while the Fender Rumble 2×10 weighs 39 lbs (17.7 kg). Additionally, the Rumble 800/210 combo is a flip top – it is compatible with the patented magnetic attachment system on Rumble cabinets.

The PF800 is also compatible with Ampeg’s flip top cabinets. This means you can keep both units (amp + cab) attached and carry them together as one unit instead of lugging around two separate units.

Overall, both brands deliver quality construction, and flat top-compatibility. However, the Fender Rumble is substantially lighter and more portable than the PF.

Fender is known for a classic sound that is warm and vintage and anything but hi-fi. The Rumble series reflects this and sounds quite similar to the Bassman amps.

However, the Rumble may not be the right amp for you if you enjoy sculpting your mids. Additionally, the Rumble’s low end tends to sound a tad muddy, particularly when compared to the PF500/800.

SEE ALSO:   Can You Use An Amp Head Without A Cabinet?

The PF 500 & 800 sound warm and rounded with a punchy midrange. They handle the highs well to a certain extent but the real majesty of the tones is in mid-tweaking features and the depth of the lows. The MOSFET preamp, 5-position mid-tone control, and onboard compressor are arguably more versatile than the Fender.

The Rumble 800 offers a drive knob (overdrive) and level knob as a part of its switchable overdrive circuit, and a 4-band EQ control panel – which is lacking in the Portaflex.

The PF features a -15db attenuator and a mute switch that can also be assigned to a footswitch, which Fender does not offer. Both units have a Stereo Aux input and a stereo headphone output with a channel select footswitch.

Anyone who loves the Ampeg tone will be in for a real treat once you put an SCR-DI before a PF500 and run it through the PF-210HE.

While the same is true for the PF800, the PF series is visibly “darker” sounding because it favors the lows to the highs. In other words, the richness in lows outperforms the highs in the overall tone, even with the EQ flat. This is apparent in a side-by-side comparison with the Rumble’s comparatively narrow/focused lows.

All PF series amp heads have ultra Hi/Lo boost buttons. The ultra Lo button gives a 2db boost at 40Hz and a cut at 500 Hz. Now you could just get this sound by twiddling the knobs but the button functions like presets to give you instant access to that sound.

The three-button tone voicing on the Fender Rumble does a similar job by offering a Bright, Contour, and Vintage button.

The vintage switch on the Rumble is often called the built-in compression, although that is not accurate. While the switch will add a little compression, it has a fixed and premeditated setting with a roll-off in the highs.

The PF Series offers a separate compressor with total control over the compression level. However, Rumble’s vintage switch can be used as a “preset” that is a useable tone in certain situations. Ultimately, this difference won’t matter if you use a high-quality compressor pedal.

Overall, both the Fender Rumble and Ampeg Portaflex have a warm, rounded, iconic tone, but the PF800 offers a wider and deeper low-end while the R800 has focused lows that occasionally struggle with low-end mud.

The PF800 also has compression that surpasses the makeshift compression of Fender’s “vintage switch”, while the Rumble 800 has an overdrive circuit that is lacking in the PF800.

There are multiple flagship Fender Rumble cabinets and Portaflex cabinets which allow you to take advantage of the each amp’s “flat-top compatibility”.

If you can live without that feature, however, any good cabinet will work well in combination with either of these two amps. That said, the Fender R800 is more versatile and can drive more cab combinations than its Ampeg PF rival.

If you want to get loud to perform with a band, you’ll need to add an extra cab for both Fender and Ampeg amps. Some bassists run a Rumble through Ampegs and vice versa. Mixing brands is always a subjective thing, however, so be sure to visit your local store to try things out before you do.

The PF500 (around $450) is cheaper than the PF800 (about $700) and Rumble 800 ($600) but the difference is not significant enough to be a deal breaker. Both brands have great customer reviews and have been widely used by bass players across the world. Their comparative value is likely determined by your own tonal preferences.

The new Rumbles are unquestionably a step up from the old ones (pre-2010), so some of our analysis may not apply to used amps and cabinets. The same goes for the early Ampeg PF500 amps that had issues and would die out if driven too hard. Those issues were quickly sorted out in subsequent revisions of the PF500 units.

As always, the tone on the two units will play a role in your subjective mileage from each amp. The good news is that when two legendary brands clash in the Class D bass amp category, you always end up choosing a winner.